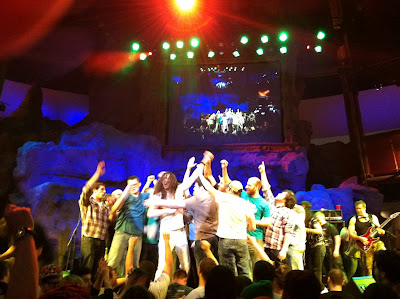 I continue to see Andrew W.K. in weird places at cheap prices. I've seen him play in the street in Providence, solo at BB Kings in NYC doing who-knows-what, solo acoustic at a record store in Mass. for free, and tonight, at a free show at the Mohegan Sun casino. 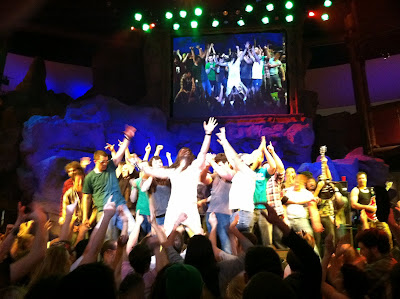 He's playing the entire I Get Wet album, and is touring with a full band (FOUR guitars, bass, keyboard, drums, wife on background vocals) for the first time in seven years. And for some reason, despite that all the other shows are the kind you have to pay for, Mohegan Sun had him not in the arena but in the Wolf Den, where the free shows take place, in the center of the casino floor. I had a feeling the Sun didn't know what it was in for.... 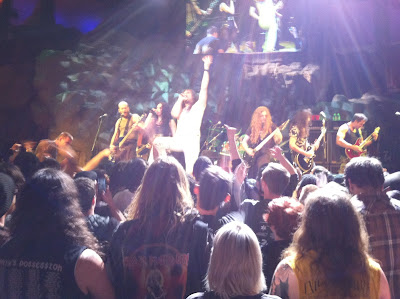 So Kim and I made the hour drive. The show was at 8. Around 4, we watched soundcheck (video below) and then realized a line had already started and was 50 people long. So there went our dinner plans. Now we'd just be waiting. The couple in front of us looked like they were in their 20s, yet had three kids, the oldest of which was ten. We chatted with them a little, spending our time rooting on slot players and laughing at the people who showed up late and didn't realize the line went 100 feet beyond where they thought it ended. When we all got herded into the Den, those two and a solo young guy shared our 6-person table right at center stage. We talked about Atom & His Package and the joys and perils of home ownership as we waited for the show to start. 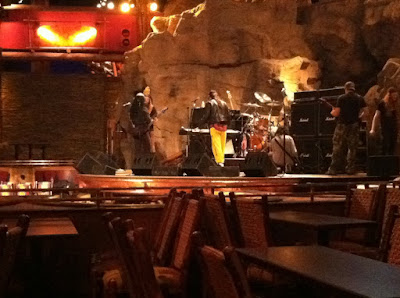 Above, Andrew in yellow Michigan sweatpants during soundcheck.

We had been wondering how it was all gonna go down. There was a small space in front of the stage with no tables. Would they let people go nuts? Was there even enough room? As you can see by the photos and videos, the answers were A. Yes, and they did, and B. Not quite, but people made room. Shortly before takeoff, everyone suddenly crowded into that space. We hung back, standing by our table, but still only 15 feet from the stage. There was one row of tables between ours and the space in front of the stage. The people at the one in front of ours stayed seated. After one song they were all covered in drinks and had people landing on them, so they slowly dispersed.

It was a great show as usual. Something about the Cult of W.K., man--they almost feel like religious revivals (or whatever it's called when people go apeshit in church to the point where it looks like they're metamorphosing into aliens). Only without the religious stuff. And with better music.


Above is a bit from soundcheck. That woman at the slot machine cracks me up.

The highlight of any W.K. show for me is always the title track from I Get Wet (video above). I didn't plan on showing video from that song as not to be predictable, but since it's the highlight for everybody else, too, I figured I'd go with it. After they went through the whole album, there were a bunch of encores including a new-ish called Headbang. By this time, as you can see from the top pictures, pretty much the whole crowd was onstage. (Of course, much of the crowd couldn't even get that close, as they only let so many people into the Den--a huge crowd formed around the outside, including, I'm told, a dude from Dropkick Murphys. We also saw three different Providence people we know there.) It was a rip-roarin' party, or, just another night in the life of AWK. I loved how he kept referring to the gamblers, who of course all were subject to the assault too. As you see in the vid, he kept calling them "gambles." He seemed intent on seeing someone "break the bank." He also brought out a guitar made to look like a slice of pizza, something I've definitely never seen before. 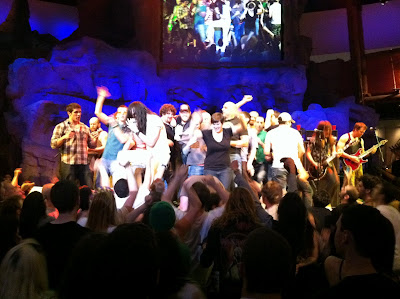 Thanks to Kim for letting me shoot pics/vids with her phone.