I was watching The Natural for the millionth time the other night. In the background of one of those "spinning newspaper" shots was a view of Times Square at night: 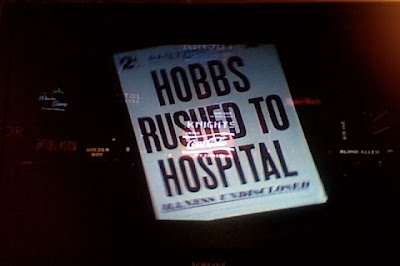 You can see the Coke sign in the middle, with a note about Hobbs being a "maybe" for the playoff game scrolling by on the ticker above. Then there's the Kinsey whiskey and Ruppert beer signs, and ones for the Capitol Theatre and Hotel Astor. Many of these are visible in this Andreas Feininger picture from 1940: 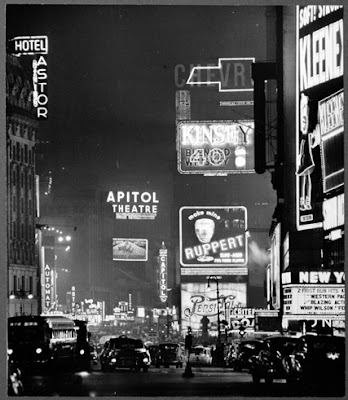 But I couldn't help but notice a sign with the state of Oregon on it (at left in top still frame). I rewound. It said "White Stag Sportswear" (Oregon's shape is around it, barely visible in close-up below): 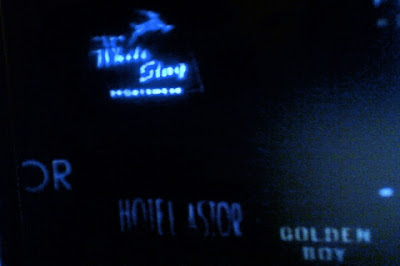 I found this odd since in all the pictures of Times Square from decades ago, I've never noticed any signs for Oregon-related companies that I'd never heard of. After noticing that the movie marquees were clearly covered up with different movie titles (Golden Boy and Blind Alley, both from 1939, the year the bulk of The Natural takes place in), I realized that the White Stag sign could have been inserted by the filmmaker. Then when I unpaused it, there was a dead giveaway: the other signs were all kind of vibrating, in the way a video camera locked on one spot shows slight movement, whereas the White Stag sign (like the movie titles) was stock still. It was clearly inserted into the shot, and not really in Times Square.

So using Reservoir Dogs "if he's betting on the Brewers he must be from Wisconsin" logic, I figured the director must be from Oregon. Either him or maybe the writer of the original novel. I looked it up, and it turns out that the writer, Bernard Malamud, indeed spent about 10 years teaching at Oregon State University, and The Natural was published while he was there.

As for the sign, it came from Portland, and it's still there. It currently reads "Portland, Oregon." Read about its history here. According to that, it's only been around since 1940 (and it didn't say "White Stag Sportswear" until 1959). So not only did that sign not look like that in 1939, it didn't exist at all. But I like the nod to Malamud. Here's a better look at "White Stag": 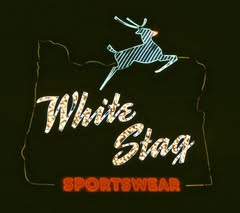 I have done some extensive searching online, and I can't find this tribute to Malamud mentioned anywhere. So maybe this is some new Natural news.

1. I'm also not sure about the red Baby Ruth sign, which seems to be floating in mid-air to the right of the Kinsey sign, and could just be a nod to Babe Ruth. Probably another insert.

2. I apologize for the darkness of the stills above. I took these from my 2001 DVD of the film. When I noticed the sign, I was watching it on some TV network, and they must have used the 2007 director's cut or some other restored version, because you could clearly make out the shape of Oregon, and the theater marquees were much more visible. Had that station shown the older, dark version, I probably wouldn't have even spotted the Oregon outline on that sign. As you can see, it's almost invisible on my DVD's version.

3. In the version of White Stag used for the movie, you can see something at the top left above the W. Almost looks like a 17 in quotes or another W or something. Whatever it is, it's consistent with one of the pics I found online of this sign, which has "home of" in that spot.

UPDATE 1/12/2020: With The Natural being on Netflix now, I figured I'd mention this whole thing on Twitter. And while I was at it, I checked the Netflix version, and sure enough, it was the much higher-quality version. So after 8 years, here's a better version of that still frame: 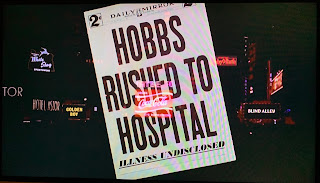 Comments:
Oh and I also looked into all the newspaper headlines they used throughout the movie. They would insert a fake NY Knights headline onto real articles, mostly from 1939. Sometimes the articles were about baseball, but others were horse racing, and one was about a memorial service at Comiskey for the White Sox owner. I found a few of the AP articles in Google News search. And I was able to ID some dates by visible box scores and game descriptions. That would be another good post, but I have to go to bed at some point....