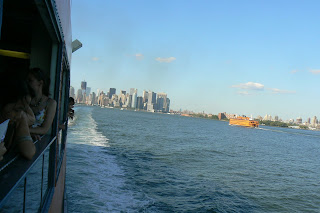 Except for this video of the gigantic boat passing by behind right field, I haven't posted anything from my trip to a Staten Island Yankees game last summer. Finally, here's your photo gallery. Above: On the (free!) ferry from lower Manhattan to Staten Island, looking back at the city. I used a shot which has another ferry going the other way so you can see what our ferry looked like while still being on it. The unfinished building at left is the new 1 World Trade Center. (Progress as of last month shown here.) 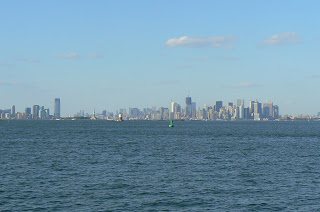 On Staten Island, right by the ballpark (which is steps from where the ferry brings you), looking at Manhattan, five miles away. Left to right: The ever-growing skyline of Jersey City, New Jersey; The Statue of Liberty; Manhattan, with antenna of Empire State Building sticking up behind another building directly above the green bouy and new 1 World Trade Center just to the right of that; Brooklyn Bridge and Manhattan Bridge at far right edge. 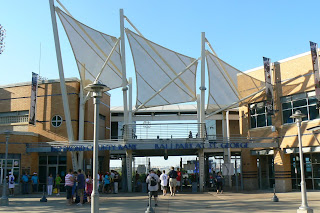 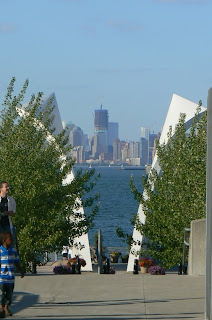 This is Staten Island's 9-11 memorial--set up so you see the new WTC in between these two things. 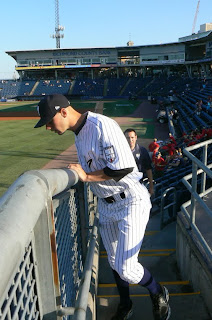 I don't know which Staten Island Yankee this is. I checked their roster but couldn't figure it out. Oh, I should tell you Chan was on this trip with me. 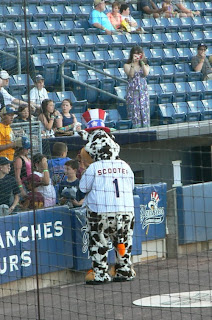 Why is their mascot named after Phil Rizzuto? Because he's a "holy cow." Figured that one out myself, thank you. As for why their mascot is a cow in the first place, or why they specifically chose to honor Rizzuto in mascot form, I have no idea. 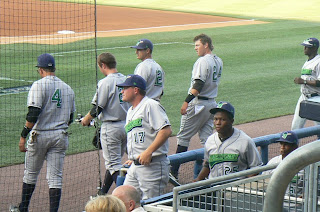 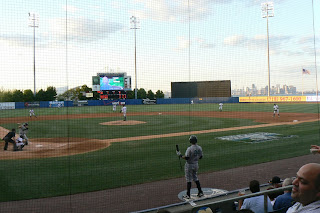 View from our seats. The row in front of us was directly under a wire which birds constantly sat on and pooped from. Also, they've got a mini Verrazano Narrows Bridge on top of their scoreboard. For more information, contact Tony Manero. 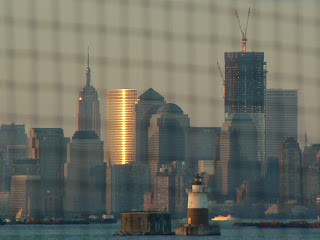 Empire State Building and 1 World Trade Center through the foul screen. WTC is 5.5 miles from the park, and ESB is 3 miles farther away than that. 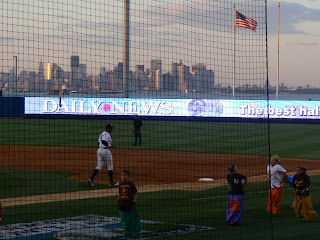 The place had the usual minor league stuff. Above, kids in sacks, racing. 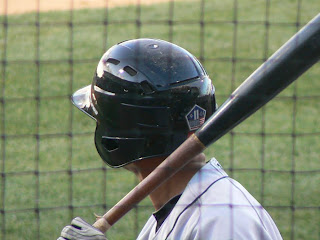 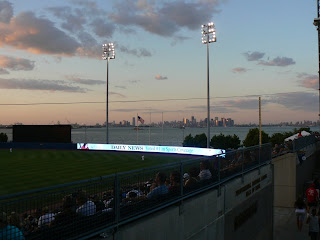 The city behind right field. 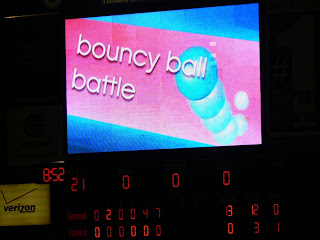 The Jammers kicked some Staten Ass that night. 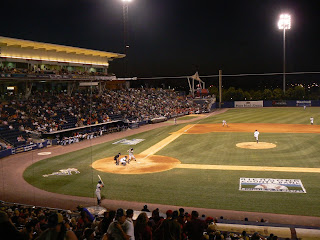 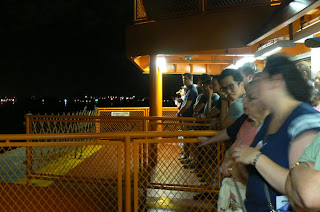 On the ferry on the way home. We were right on the front and got to watch Manhattan grow. These people are all facing front--they don't let you go right up to the front edge which is why you see extra boat-ness on the left. 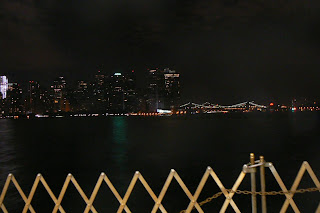 City at night. The building at far left that's all lights is, once again, the new 1 WTC. Below is a video as we approached the city. The roar you hear is the wind, but it was the hot, awesome kind. And I had it zoomed so you can hopefully feel the city looming in your midst. I love when you're moving along, close to a skyline, and you're so close that the buildings in the background appear to be drifting along behind the closer ones, peeking out from behind one and then hiding behind another. Anybody know what I mean?

Finally, from that same NYC trip, a shot I took out Chan's window. Harold & Maude fans will appreciate this.... 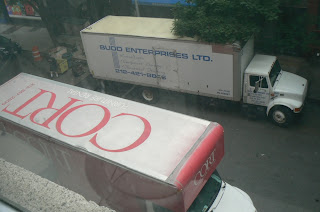 Final summary: Staten Island Yanks game: Worth the adventure. Oh, right, one more thing. This night would feature my all-time best guesstimate. I know I've bragged about this type of thing before, so you can probably stop reading now. But this one must be documented. While waiting for the ferry to take us home, there was a delay. People were pissed. From what the regulars were saying, this is unusual. The ferries have set times and usually are there for you. So while we waited, I went into my patented NYC time-distance guesstimation mode. But first I had to guess when the ferry would arrive. So I took that amount of time, added the time of the ferry ride, then the estimated walk to the subway, then the estimated time of the subway ride which is upwards of 100 blocks long, then the estimated walk to Chan's apartment. I added that all to the current time and gave Chan my predicted time of arrival at his door. And I got it right. To the minute. For months I actually kept the exact times in my head, but seeing as it's been seven months since this happened, I've lost those. But it was something like 10:18 to 11:51. This wasn't no half-hour trip, I can do those in my sleep! And you gotta pretty much guess out of thin air when the ferry will come and how long you'll be waiting on the subway platform. And Chan monitored it the whole way, with me never looking at the clock and therefore unable to start walking faster or slower to affect the time of the trip. I'm still trying to figure out a way to make a living using this skill. Your ideas are always welcome.