Sunday, Back At OWS 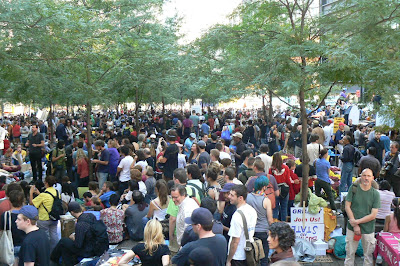 Zuccotti Park (aka Liberty Square, Liberty Plaza, home of Occupy Wall St.) on a near-90 degree mid-October Sunday. This time Chan went down there with me. Got this shot from the eastern end of the park which should give a good indication of how big this thing is--considering it's within the boundaries of a half-acre space. 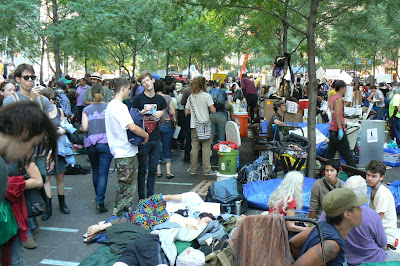 My kind of protesters: Do your thing all day then sleep till 2:00. 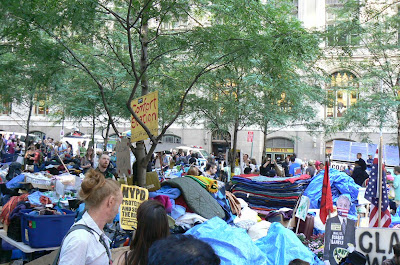 It's like a tiny city in there. Here is the "comfort station" in the middle. You don't realize all the stuff you have in your medicine chest till you try living outside for weeks. 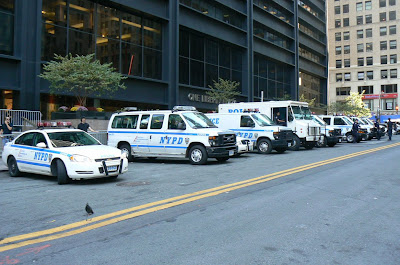 I felt like the cops had a bigger presence today than yesterday, and/or that they seemed closer to some kind of breaking point. This is taken from the park, and shows how they've got their own occupation going on, across the street. They asked us to move farther behind the barriers that surround the park. We had incorrectly assumed that merely "being behind them" was law-abiding enough. I don't know, maybe they were just looking for stuff to do, since the protesting is peaceful. 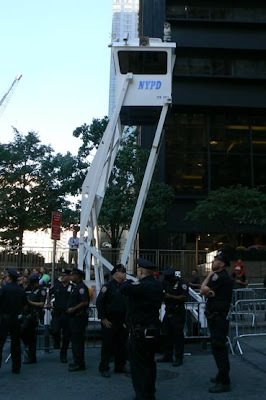 They even have this monitoring thing that moves up and down and films the park. And as you can see, the cops had plenty of time to stand around. One cop seemed to be having a ball, taking pics of stuff with his phone and then giggling and showing his cop friends. 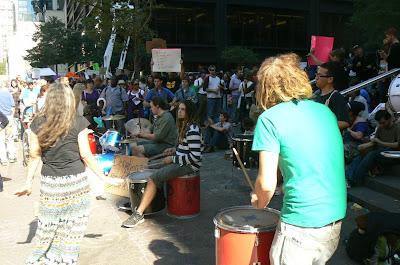 I was so pissed at Bill Maher the other night for saying "get rid of the bongo drums" (along with some other things I'm sick of hearing about this movement). What harm is drumming gonna do? Oh, the assholes in suits won't "take them seriously"? How about we start telling them to stop wearing suits because we don't take them seriously? It's just like when baseball fans say to end the season early because football has already started, instead of saying this is OUR season, if you don't like it, move YOUR season back. People get pressured by their enemy so easily, it's terrible. Bill Maher, a pot-head, pressured to tell other pot-heads to straighten up and fly right. Fuck that. I love Maher and agree with 90% of what he says, but he's a guy we need to be fully on board with this, not repeating the other side's claims of what's wrong with it. 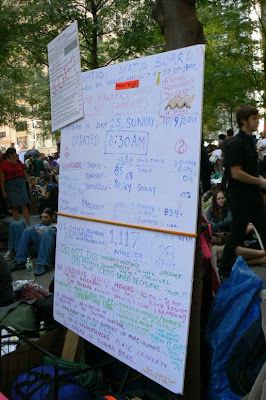 The status board. An interesting read. Especially since it tells the occupiers to be quiet at night and respect their neighbors--I have read some complaints from neighbors, but it could be a another case of the media finding 2 people with complaints out of 1000, and writing an article called "neighbors pissed at protesters." 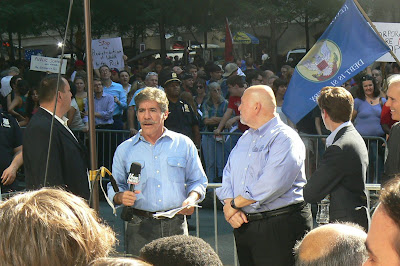 Geraldo tried to keep the occupation a secret, but now he's opening the vault. Wah-wah..... I had to explain that joke to Chan. He came to this country post-80s so he missed out on most of the shit I talk about today. To his frustration, I say: 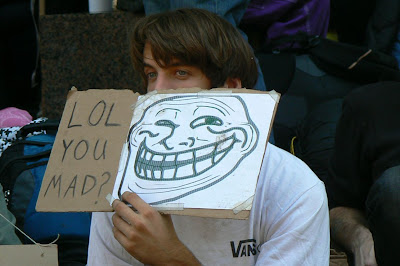 Which is another thing he wouldn't get, because he doesn't have time for this Internet meme reedit 2000s stuff. 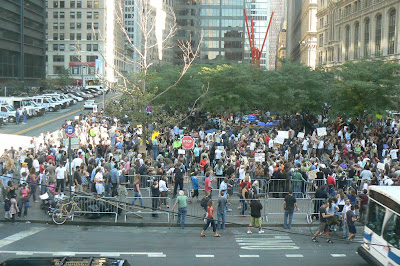 View from the western end of the park. Went to the 2nd floor of the BK lounge across the street to get this shot. I have to say, though, just being at the top of the steps on the eastern side makes for a better shot, since you're as high as you can be without being above the obstruction-causing tree-line, like I was here.

So then we walked around the new World Trade Center site, which is right next to this park. Pics of that will be in a different post. Did I mention it was like the most beautiful day of the year? Short-sleeves, all the way till dark. Easily. Even for wusses like me who call to the sweatshirt-pen at the first sign of Mother Nature losing a few degrees off her mercury ball.

A plane started doing some skywriting over the city. It said "...OUR" and it did L... E.... A.... S.... E. We were all confused. I suggested it was some very rich person reminding himself to renew his lease. Would that be breaking the Skywriters' Code? Anyway, a little later, it started again. This time we looked up and saw CHAN! They weren't done, though. It became LAST CHANCE. Okay, now we knew it was some ad for some store going out of business. I now suggested they could have stayed in business by using some of the thousand dollar bills they had lying around that they use for writing messages in the sky over New York City. Then later, a final message. N... O... W.... and at that point, we didn't give a crap what was left, so we went to Shake Shack.

Later, during a 60-block walk back to Chan's apartment (on which I predicted the exact time we'd get home using my Manhattan Grid Math as usual--Chan is now so impressed with my skills that HE suggested I do it), a girl passed us, and was saying to her friend "it said LAST CHANCE" while showing the friend her phone. Okay, so people were talking about this still. Then we got home and channel 4 news (after talking about OWS first, woohoo!) brought up the skywriting too! Turns out it was an art thing that mocked ad slogans. Okay, I'm happy with that, whatever. What I'm not happy about is that the Daily News also covered it, and has it as their top story, acting like it horrified the city and made everyone think terrorists were at the helm! Such bullshit. All the people around us watching these letters in the sky were just waiting to see what it would spell out. It was hardly War of the Fucking Worlds. We all figured it was an ad, you know, like EVERY OTHER sky-written message you see. Not one person showed any sign of unease, tension, terror, or anything else besides "Okay, I'm watching, this better be good because you're writing those letters really slowly and I've got three utterly meaningless texts waiting for me down here." Also, duh, if terrorists are gonna WARN you about an attack, they're going to use methods a little more modern than skywriting, don't ya think? Gee, how can get a message across to EVERYONE in 2011? There's only one way! It must be WRITTEN IN THE SKY! I know the first few letters will blow away before the message is complete, but that's all we've got, dammit!

Before our long walk, we ended up sitting on a bench along a concrete path in Madison Square Park playing a game I invented. We count the number of males who walk past us, versus the number of females. I had girls, Chan had boys. First to 25 wins. We had to lay down some ground rules:

1. If someone walks by, then reverses direction and passes again right away, you only count them once. This avoids getting 2 points for someone making a quick trip to the garbage can next to us. However, if someone is walking to one end of the park, then comes back and passes by again, or is simply doing laps, they are counted every time. This avoids fights over whether someone is a repeat.

2. Babies do not count because the sex may be hard to figure out. The first time a baby went by, it had a pink dress on. I insisted we should count that as a female, but Chan said, "no way, my mom dressed me as a girl!" After I stopped laughing my ass off, I agreed to the "nothing that can't walk counts" rule. (Chan later specified he was only dressed like a girl once.)

3. No affecting the game. If the other guy is one person away from a win, and has a mark headed toward us, you can't stand up and start screaming obscenities, causing the person to rethink their route through the park.

I took women just to make Chan be more willing to play, figuring females were the underdog in a park with night falling. My theory was right, as Chan took game one, 25-16. After the board was cleared, meaning no one was headed directly toward us, we started up again, and this time it went down to the wire. We had fantasized about a photo finish, and we actually got one. It was 24-24, and a woman approached from the left. But she was on her phone, doing the "stand, walk, stand again" thing, totally in her own world. She stopped five feet short of us and finally seemed planted. So it would be up to someone else. A mom, dad, and daughter headed our way. The daughter came through for me, walking just ahead of her parents, crossing the line first and giving me a 25-24 win.

Chan took game three 25-22 before we got outta there, so he was the champ. It was funny how the game turned us into inadvertent pervs. Women would head toward us and I'd go "The ladies are comin' through for me to-nite!" or "awwww yeah, look at what's strollin' this way...." Even funnier was Chan doing the same thing to dudes. I almost felt like the Lovitz/Hanks SNL characters. "Look at what we have here...." (Of course we weren't doing this at full volume, but some people probably wondered--others were just confused at why we appeared to be listing off numbers.) It also made us become irrationally hateful of strangers: "Why would you come out here right now?!" "Who told you to take this path?!" "Who brings their kids out at night?!" And I don't know if this will happen where you live, but we did have a few controversial people. There was one person who I honestly couldn't say what gender they were. Not that there's anything wrong with that. But we've got a game going here!