Of Course I Went Down There!

Was gonna leisurely make my way down to NYC today and check out the Occupy Wall Street action. At 11:45, though, I found out that Anti-Flag would be playing there, in Zuccotti Park, at 3:00. I'd be cutting it close, but I went for it. Got to the Triboro Bridge from Providence in record time, and was all the way down the FDR just before 3:00. One stupid move cost me a few minutes, but I finally parked about a 7-minute walk from the park. 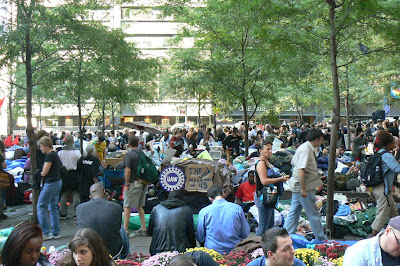 You can see all the sleeping bags and stuff. The place is packed with occupiers, but there are paths for everyone to walk around. It definitely smelled like weed/incense/b.o. But it has a positive vibe. Like a big sleepover. I'm so glad something like this is finally happening. A year or two ago, I wrote an e-mail to some friends suggesting that "we" (the 99%) do something like stand at the driveways of mansions. No violence, just let 'em know there are a lot more of us than them. Well, we are finally standing at their proverbial driveway! The way people decided to do it is to go to their places of work, not their home. Good call. My idea was clearly flawed. 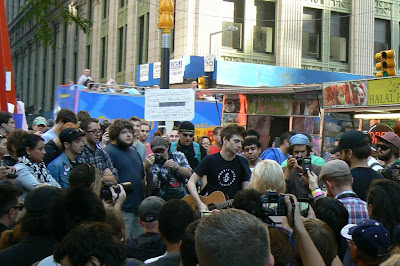 I knew Anti-Flag would only be playing an acoustic set, but I still figured there'd be stage. Or at least a microphone or two. Turns out it was just Justin Sane, the singer, and his guitar, surrounded by a small crowd. I actually almost walked by this group--you could barely hear anything. I'm not complaining, I'm glad the dude went down there on his own time and played a few songs. 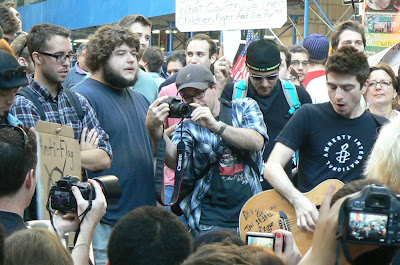 Their "backdrop" was a pizza box (at left). Sweet! He had at least one other band member with him, and they sang the last song together. I only caught the last few songs. It seems like yesterday I was buying their first album. Turns out that was 1996. 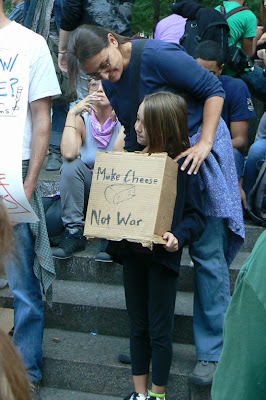 This girl likes cheese; does not prefer warring. 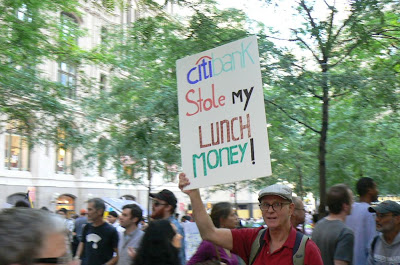 
Bonus: check out this sign I saw on the way down. Cold! But funny. 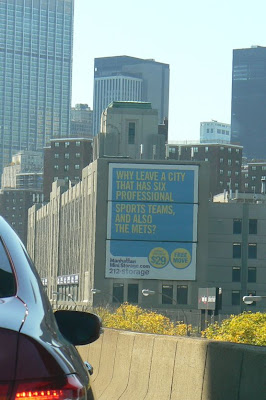 (Rule: You're not allowed to comment here if you're going to spew the media's bullshit non-issues of "they have no leader," "they have no clear message," or "they should dress better if they want to be taken seriously.")

Jere that is great! Man, way to make it happen, and how fuckin' cool that the show you went that whole way to see was a dude w/ a guitar and a pizza box! Great to see a report from your perspective. Also dig the comment disclaimer.

Thanks for the comments, guys. Went down again for a little while today. Good stuff down there....