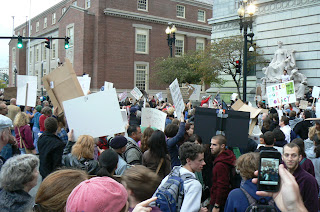 Kim & I didn't know exactly what to expect when we went to the Occupy Providence "events" tonight. But our citymates impressed us. As soon as we got to the park, a march began. I thought it was just a few people, marching a little ways, then we'd all come back to the park. Turns out we were marching till dark. And there were a LOT of us. 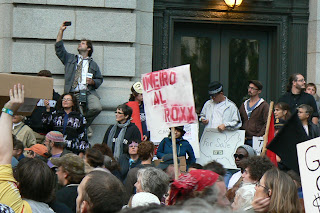 Okay let's get this out of the way, though. What's up with this "Weird Al Roxx" sign? I have long thought Weird Al does indeed rock--for almost 30 years now, holy shit--but is this some Internet Code or something? I asked my pal Google and he showed me this quote all over the place, along with the longer "Weird Al rox my sox" phrase, but, do people just say that for the hell of it or is there something more to this? I gotta figure there is if someone would make a sign out of it and bring it to a non-Weird Al event.... Moving on.... 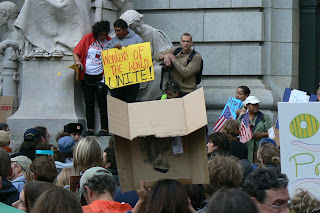 For years Kim has been asking why people aren't mad in the streets in this country, and I could have only dreamed of seeing large crowds of people cheering at someone holding a "Workers of the World Unite" sign in my own city, so this was kind of a huge day for us. 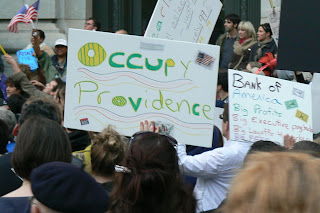 The actual occupation of Burnside Park starts tonight. Kim was kind enough to donate some soap to the people who will be camping out indefinitely. 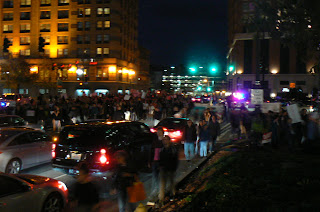 By the time night fell, we'd zigzagged through "downcity" (the city of Providence's ill-conceived attempt at naming its downtown district), stopping at a few key spots and listening to speeches which we'd have to relay back to the marchers behind us since the trail of people was so long. Here we're almost to the State House. 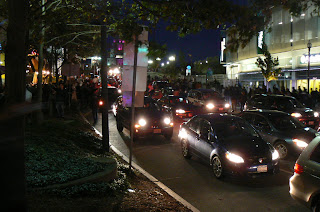 You can see the State House in the distance. Cops were closing streets as we marched along. There was a pretty funny moment when we passed the convention center. I thought people were on a smoke break, until I realized they seemed to be having some kind of cigar convention. We got dirty looks from some of those people, others had that guilty look on their face, like, Oh shit, the world's fucked up and yet I've decided to spend my night smoking and discussing fine cigars. But hey, that's their thing. 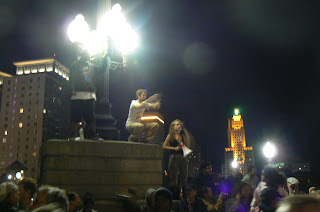 Our bullhorning hosts in front of the Family Guy skyline. 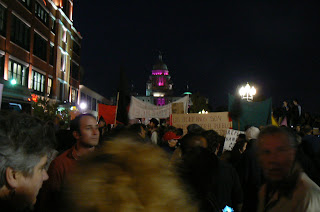 Getting close to the final destination before a return to the park. 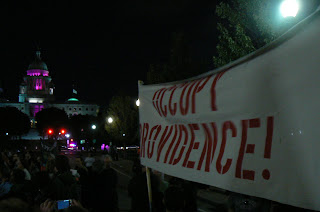 This was the best shot I got all night. 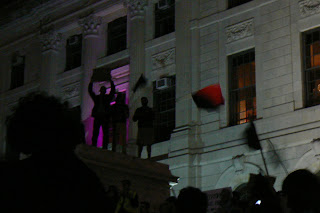 It was cool to march up the steps of the State House and then look back down at the crowd. It was pitch dark so I can't really show you that unless you want to look at a black rectangle. After a spirited speech by one of the flag-wavers above, we went back to the park, which was another fun march through honking stopped traffic.

After being at Occupy Wall Street last weekend, I worried the Providence version might pale in comparison, but it was effin' great. Nice job, PVD.

Comments:
That's a great turnout. I, too, worried that the PVD version would be anemic and it's good to see it was huge. Its also good to see a groundswell of outrage about ACTUAL PROBLEMS for once.

Oh yeah, and although I wasn't able to go yesterday I watched some coverage of it. Favorite sign: "Serenity Now!"

The soap was awesome! Keep coming down! Thanks to the soap, we aren't dirty hippies ;)

Ryan--great call on "ACTUAL PROBLEMS". And we were right behind Serenity Now for a while! It was dark so my pic didn't come out--I did shoot video of it which I almost posted a screen shot of just to have it up here. But I must have watched the same report as you because I saw it on the news, too.

OccupyProv: Sweet! Glad you liked it.