Left Providence at 4:00 after game 1 ended. Got to Boston a little after 5:00 using my "anti-93" route, and parked at a meter on Beacon Street on that bridge that goes over the Yawkey T Station, steps from Fenway Park. Meter ended at 6, and I went in around then, since I knew there'd be no batting practice between games. 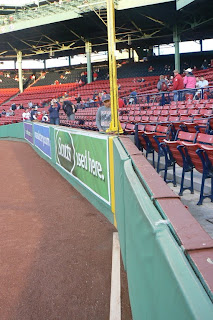 First thing I did was get a shot looking right down the foul line at the pole. Why? Because Don Orsillo incredibly brought up the "misalignment" again in game one. The guy actually thinks they just screwed up, and that the line on the wall doesn't match up with the foul pole, simply because the line hits the wall at an angle, therefore from left field, the wall line and the pole appear to be far apart. I clarified it with pics in another post, but now I'm showing how the line and pole do line up when looking right down the line. (With the slight difference due to how the padding sticks out from the wall.) It pisses me off that Don doesn't understand this--and that as long as he does think it's a horrible error, he's not calling the league offices/wondering why it hasn't been "fixed." Moving on. 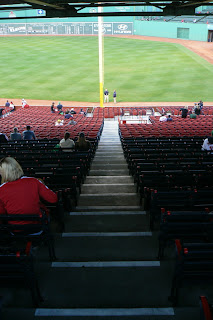 On the subject of Pesky's Pole, here it is from an angle I don't think I've taken a pic from before. 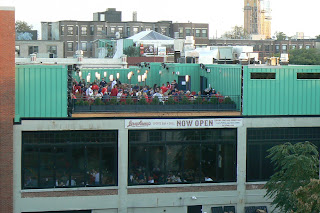 And turning around from that spot, the Remy's roof deck is finished. 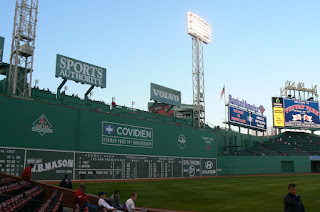 Look how they show the score of game one in the 10th inning slot on the Monster scoreboard. 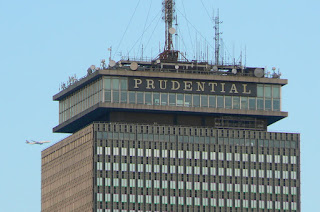 Plane going behind the Pru. (Or tiny plane going in front of it.) 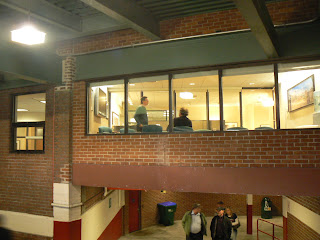 I'm always seeing members of the front office around Fenway, but it seems like they're always extra visible on the last homestand. Here's John Henry in a special room.

So the game began, and I started watching from the standing room at the third base deck. After the top of the first, I was thinking about just walking out of there and not watching this team till April. Lackey was really pissing me off. 3-0 O's after a half inning. That was the low point. Then a Fenway employee came up behind me and asked if I was alone or if I had friends with me. What now, I thought...is this guy about to tell me this section is for couples only? I told him I was alone. He then handed me a ticket. He was giving me a seat. I was in shock, as I looked at the ticket and noticed it was in a low-20s grandstand section, which I knew to mean home plate. He said it was part of his "fan appreciation week" duties. I shook the man's hand, thanked him, and bolted for my sweet new seat... 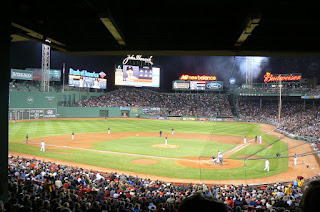 ...here! Sure it was toward the back of the grandstand, and sure there were some empties at this game anyway, but to suddenly have a seat I knew no one else was gonna take, behind the plate, blocked from wind, with no poles in the way? Score! 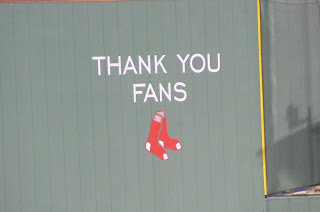 And then the Red Sox scored four runs. Then two more. Then five more. It was 11 to 5. The moment that guy gave me the new seat, things turned around. I've been waiting for a moment like this for weeks. There it is. World Series, here we come. 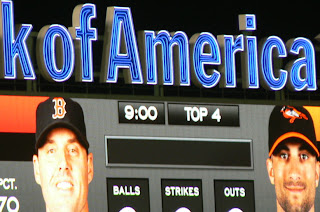 It was a long game--9:00 and we're still in the top of the fourth. Lackey did try to give this thing up repeatedly. It was actually 11-8 when he left (to booooos), but we would pull away. Great job by Atchison coming in and stopping the blood flow. 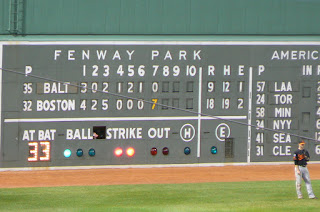 In the 7th, Jacoby hit an inside-the-park homer, and then Conor Jackson hit a grand slam. We had seven runs before an out was made. And that would be your final, 18-9. 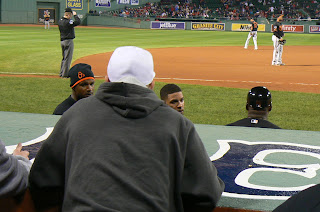 I finally did go down to dugout seats since there were so many empties by the eighth inning, what with the blowout, the school night, and the cold(ish) weather. These Orioles were talking to fans, and I think signing autographs during the game. 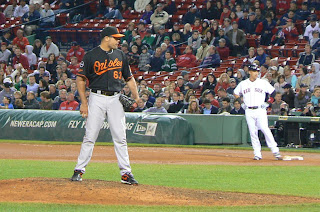 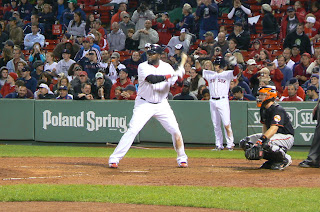 He pitched to Papi but no crazy stuff happened. 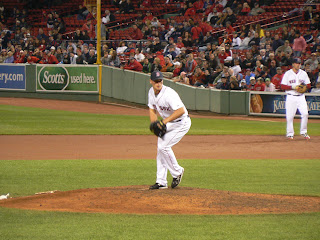 Bowden holding the 9-run lead. Oh, and like they've done in the past, there were other "fan appreciation" things, like whole sections getting prizes and stuff. I've never scored with that stuff, but I got a huge win tonight with that seat upgrade. It really does happen. 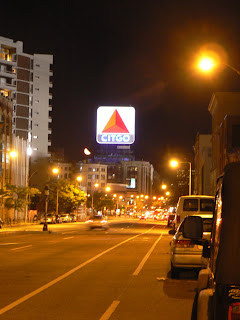 Got to my car quickly ready to beat everybody out of there, but had to stop to get this shot of the moon by the Citgo sign. 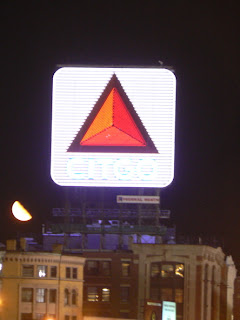 Blurry-ish close-up in case you didn't see the moon in the previous pic. 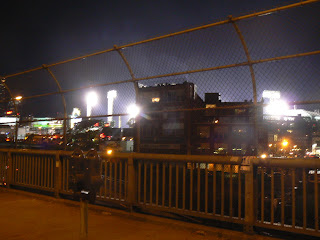 And since I had the camera out--the lights of Fenway from my free parking spot, with all the $40 spots in between.

I also was appreciated! I won the golden seat sweepstakes thing at the first game. My kids and I got upgraded to the first monster row. It was great except for the final score and for the fact that because I went to both games I overpaid for parking at the Pru. What is your secret with the meters? Is there some sort of grid one can look at or do they all end at the same time? I'm just a hick from NH who usually parks at Alewife anyway.

As for meters--they're only good for Sundays and night games (but that's a majority of games). For a day game that's not on a Sunday you've gotta come up with a different plan. I've discovered a few free options but they involve lots of walking. Other than that, find the lot that combines the best of your walking and paying needs. The Common garage is cheaper than the Pru, but is a longer walk, etc.

As for times meters end, many around the park go till 8, but many more go till just 6. The 8s are fine if you don't mind missing BP (but if you're getting to the area that late, it's much tougher to find a spot anyway). I've just tried parking almost everywhere around there, that's how I know which are 6 and which are 8. Huntington Ave 6, Mass Ave 8, Beacon 6, Comm Ave 8.... I don't know if there's a web site which tells this stuff. I know there's one that shows parking details, but I don't know if that involves meter times.