(You're gonna kill me, but) I went back through Sunday's "sign day" game and took pics of every sign that used the Circle Sox logo. My initial inner-brain count was right--13 old to 2 new. Except for one thing--I since realized one of the olds was actually a new. So the official count is still an (expected) blowout in favor of the old logo, 12-3.

So here they are, starting with the three sign-makers who were aware that the Red Sox tweaked this logo in December 2008. (Or picked randomly and got it right.) 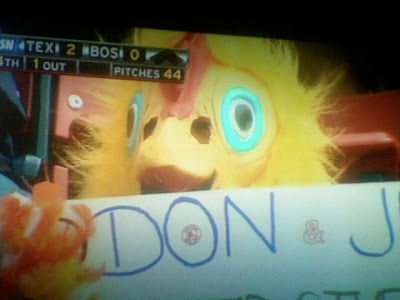 This is the one that I changed my mind on. Hard to tell here, but looking very closely at this on my TV proved it to be the new logo. This chicken person had it in two places on the sign. 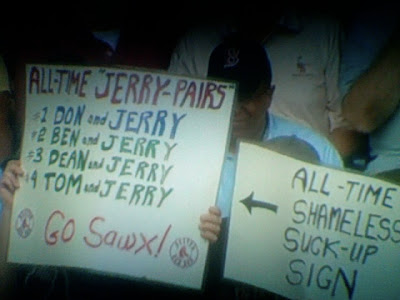 Another person who used two logos, both new. I liked this pair of signs in general, but the bonus was the one guy being in the few, the proud, the new logo brigade. 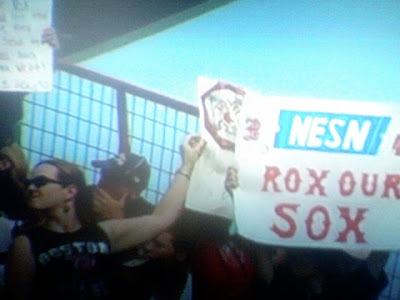 And one more new I spotted, on the sign peeking out from behind the "rox" one. Can't even tell what this woman (at left) had on her sign, but she makes MY top three, for logo awareness alone.

So there you have the only three (to make it on TV anyway) to use the new.

Now let's look at the TWELVE signs with the old version of the Circle Sox logo: 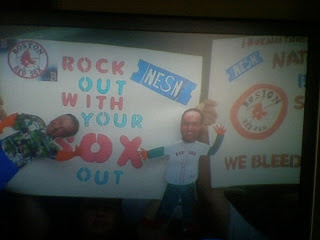 Two signs next to one another, two old logos. The one on the left was one of Jerry and Don's three finalists. Funny how they based this on the phrase "rock out with your cock out/jam out with your clam out" and not only got on TV but almost won the whole damn thing. Despite, of course, the old logo whose oldness was, predictably, not noted by Don and Jerry. (Just for new people, who also don't know about the December 2008 change: the old had BOSTON in blue in a different font, the new has it in red and in the same font as RED SOX. Also, the positioning of the stitches on the background ball changed.) (For regulars: Sorry you have to hear this again and again, but come on, this post proves 12 out of 15 Sox fans don't know.) 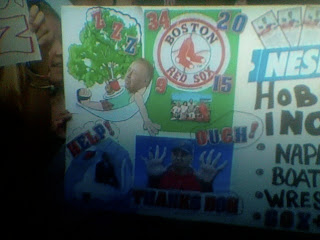 This ended up being Don and Jerry's winner. They live right near me in Rhode Island, and worked on it the night before (as opposed to using the park's sign-making stations). They got to go to the booth, and they won the free tickets and other stuff. Congrats on your win, but, come on, you all seem to be huge fans--know your logos! 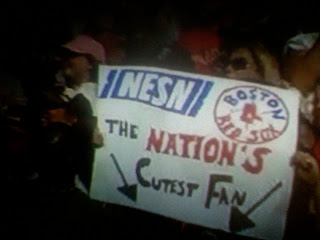 The logo on this one was drawn. Too bad they drew the wrong version. 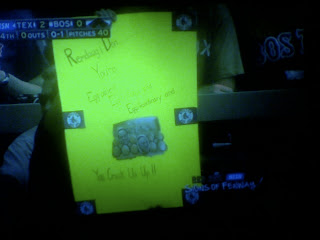 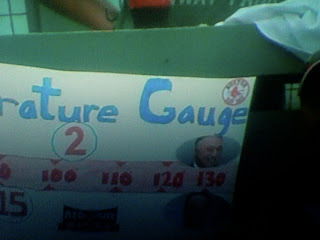 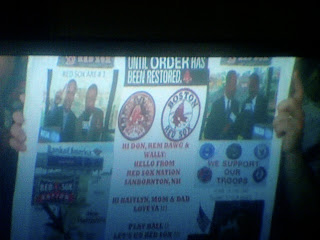 Rem and O-lo liked this one. Again, these people seem like they care about the team a lot, yet somehow their brains haven't grasped this crazy new logo floating around that somehow seems different...

Ahead: a few more olds: 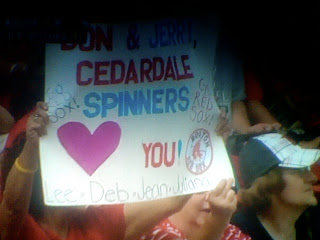 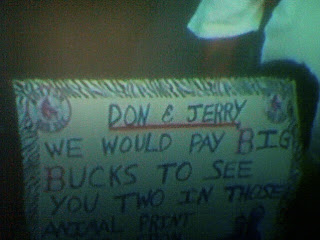 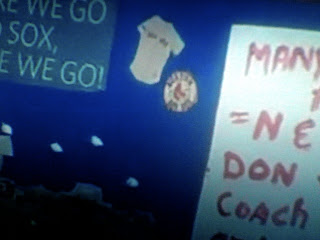 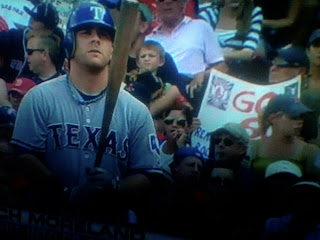 In the one above, the guy would have it up between innings and you'd see the top of it if a lefty led off. I looked very closely. It was an old.

So that makes it 11-3. But there was one more that I classified as old: 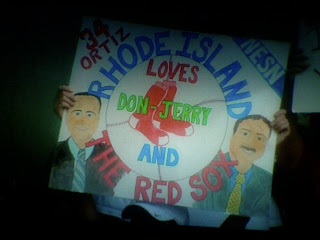 It's got the socks in front of a baseball, with words curving along the top and bottom. I say that's absolutely inspired by, if not a version of, the Circle Sox logo. And what was their color scheme on the words? Blue above, red below--them's OLD logo specs! Along with the old logo stitch positioning. I absolutely consider this eligible in my game, and playing for the wrong side.

So your final score is 12-3. Eighty percent didn't know. Pretty much what I thought. Recently, Red Sox Diehard suggested they just bring the old logo back. That it was better anyway. I agree I liked it better, but it's too late now to go back--they really have to just keep using it. The road uniforms changed at the same time. We all know what they look like because they wear them every road game. We need a spot where they can put the new logo up where everyone will see it all the time. Maybe their achilles heel was "changing" it as opposed to making it an "alternate" to he old. At the same time as the logo and uniform changes was the addition of the on-field Hanging Sox cap. Even when they use the alternate Friday jerseys, I don't even think they wear those hats anymore. But that's not a problem because those didn't replace anything. But the logo change is on a visual item they still use and don't plan on stopping, as far as I can tell. So they need to keep showing it to us. As I've said before, how can we ever use the old version as a "retro logo" if no one realized it went extinct?

Here's something interesting. We got a physical copy of the Providence Journal today, and I noticed they are still using the old logo (as is the Boston Herald). I was going to put a picture here at the end of this post. Then I decided to look at ProJo's coverage of the day when the logos/uniforms changed. What they said was

The Red Sox are also changing their primary logo. At the moment, it is a pair of hanging red socks inside a circle inscribed with the words “Boston Red Sox.” Now, the circle and the words will be gone, and the socks will be the primary face of the franchise. It will be used on everything from marketing materials to the team’s alternate baseball hats.

That's one way to say it. Another more correct way would be to say that while the Hanging Sox on their own became the primary logo, the old logo WILL REMAIN, in a tweaked form, as the secondary logo, along with the red B from the hat. It's as if their writer didn't catch that part of the press release/conference. But they're going by their own story, why in 2011 would they be using the old logo at all, instead of the Hanging Sox? And if they really somehow don't know a new logo exists because they only know of what they themselves report, surely they would have come across this foreign logo and asked a friend or associate if they had any dirt on it.

I just wonder what happens in the brains of "Oldies" when they see the new logo. I assume it's:

A. What are you saying to me? That's the same logo they've had for decades. I see no difference. I'm not a math person. I haven't had my coffee yet. Go away.

B. Hey, look at that funny logo. It must be from the 1940s or something, an older version of the one we all know and love today. (How's that for irony?)

C. Oh right, they did change it a little. [But brain decides the info isn't important enough to retain.]