"I missed tonight's Red Sox game because I was at Fenway Park" is always weird to say. But it's true, I lucked out--didn't have to see tonight's loss. Once again the Orioles give us a chance to gain, and once again we fail. Still 2.5 back.

We were at Fenway for the Mighty Mighty Bosstones/Dropkick Murphys show. A gift from Kim to me. They released extra tickets the day of the show, so I got us some new ones, right in front of the stage. Matty's gonna kill me, but we missed the Street Dogs. Didn't see any of the other opening bands, either. I don't even know where the other stage was. 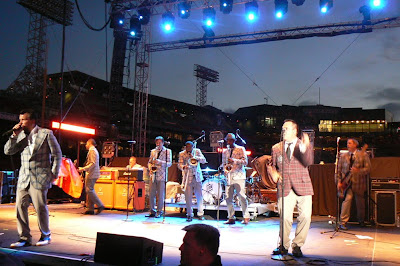 It was still light out when the Bosstones started. I hadn't seen these guys since Lollapalooza '95 in Hartford, on the side stage. I've liked 'em ever since. Well, maybe not in any kind of active way, but still. I feel like they're the band that "could have been" the Murphys, in terms of Red Soxiness. Know what I mean? But it was a good call by DKM to have them open at Fenway, since it was the Bosstones who they used to open for when they were starting out. 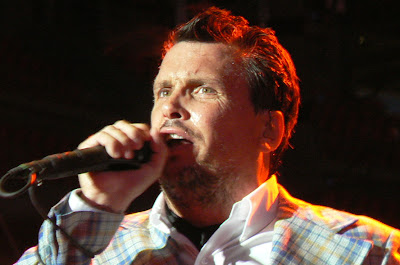 Dicky was steaming. I tried to get a shot of that. And here it is. And yeah that one guy still just dances around. That guy's great. Kind of weird seeing a band twice but with 15 years in between--and to think that they were already 12 years old when I saw them the first time. 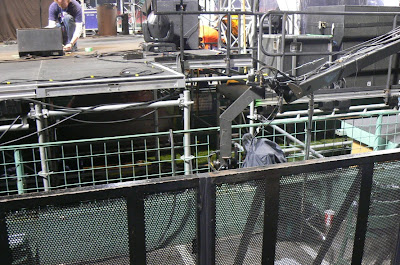 For this stage set-up, it appears they removed part of the bullpen roof. Look to the right side of this shot and you can see where it's cut off. 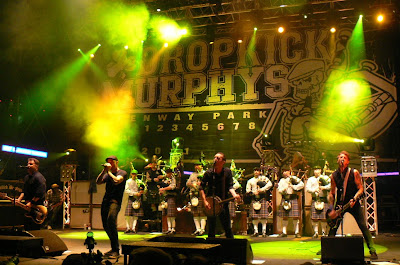 And then the Murphys played and stuff. 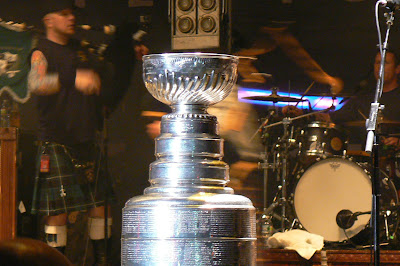 And a Bruin brought the Stanley Cup on stage.

Ken Casey did a cool thing for their closer, Kiss Me I'm Shitfaced. Video below:

Then Kim wanted to go to a bar. Obviously we weren't gonna go to the Cask or the Works or any place with 5,000 people about to jam into it. So I started driving toward the city, and then I thought, "I know a bar!" And soon we were sitting inside Cheers. Of course, if there's one single fact that every northeasterner knows, it's that "the inside of the 'real' Cheers doesn't look like it does on the show." (It's also not the Bull & Finch anymore, as it was bought by the "Cheers" franchise which has other locations.) But it was cool to approach it, walk down the stairs, and hang out there. It was pretty quiet and well-lit. The bartender told us stories of Rhea Pearlman and showed us a book about the show which for some reason was signed by several seemingly random people. Me, Kim, and the British guy next to me all signed the book.