Coming soon, my pics from Sunday afternoon. I think they're better than these. But that's just me. 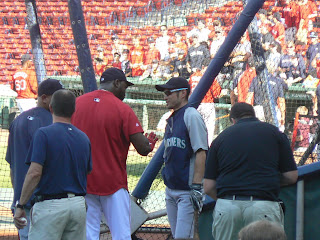 Parked for two bucks in quarters, right near Fenway on Friday, game one of the Seattle series. It was 103 degrees in Boston that day. Above, Ichiro and Papi. Note the fans in the background, all stuck to the home side of the first base dugout. 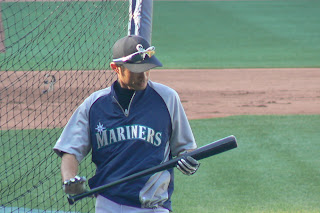 While we were all still waiting to be allowed beyond the bases, Ichiro hit ball after ball into the near-empty right field seats. The few stragglers that were out there for whatever reason were cleaning up, casually going through empty rows to get balls. It was hell. I watched every single ball, hoping one would land and no one could find it and they'd just give up (hey, another one's coming right behind it anyway you lucky assholes!). In the meantime, an usher fielded the same question over and over: Why? His answer: The team has deep pockets, short arms. Having fewer employees come in "early" (a time that wasn't even considered early last year) means fewer to pay. He told me, as Kelly O'Connor has, to write to Lucchino. I suggested to the guy that they let fans go beyond the bases but stay in the seats as opposed to underneath. He said then they'd have to guard all the runways. Seems to me that wouldn't take many more employees than they're using now for this unnecessary maintenance of the border. 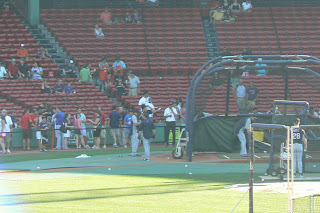 By the time the guards let down their arms, Ichiro was done. (When they say he can hit a HR whenever he wants, they must mean in BP, because that's definitely true.) However, just as I reached CF, Adam Kennedy (above, left of cage) hit one out there, and... 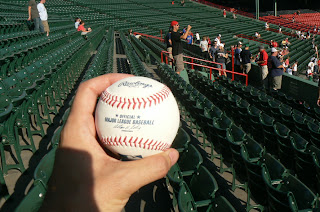 ...the drought is over! I raced along the row shown here in section 36 to pick it up just before red-hat got there. Hardly a mark on the ball--I wouldn't have guessed it was ever hit by a bat had I not seen it happen. Checking my records, aka "this blog," I see the last time I got anything was July 10th, 2009, my 14th and 15th lifetime balls (all BP). So it had actually been more than two years. And it's still weird to me that my total is in the teens, since it had been in the single digits my whole life until my huge year of 2009. Then I think of the 5,000-something balls Zack Hample has and realize I essentially have no balls. Moving on.... 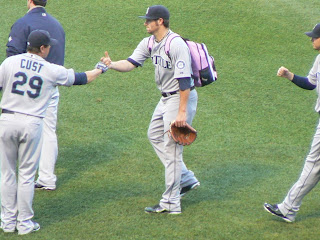 This dude had to wear the pink Hannah Montana backpack. 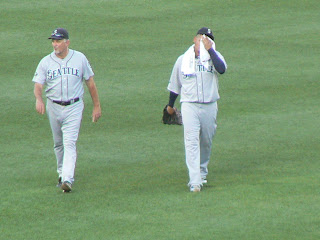 The King was overheating before the game began. See that move? That's what everyone in the park was doing all night, constantly. Constant sweat-film. At night. The whole game. 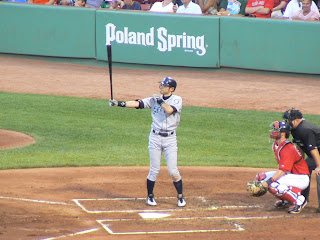 I know, I mostly shoot Ichiro. But it's fun. Doesn't it look like he's holding up a Poland Spring flag? He singled on Lackey's first pitch of the game. Stole second on the second. Stole third on the third. Lackey settled down though, and we beat the King. 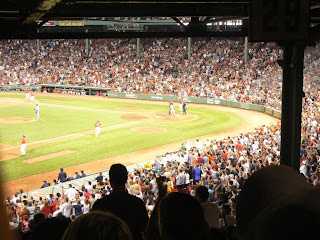 I knew our third run of the game would be number 80,000 in franchise history. Once we got to two runs, I kept waiting to get a shot of 80 grand crossing home. Salty was on third. He could be it. Then, Adrian hits one...through infield. I waited to watch it, because that's more important to me anyway. By the time I snapped the above pic, Salty had already scored, and Ellsbury was flying home. Whatever, I got a picture of the play that scored the 80,000th, and the guy who just scored it. HOWEVER. I got home that night, and saw an e-mail from Allan aka Joy of Sox. He said that on the page he was looking at (on Baseball Reference), we were still several runs away from 80,000. The page I'd been following was also on B-R. What gives? We don't know. But he wrote to them to ask. We'll see what they say, and hopefully we can get a true total. 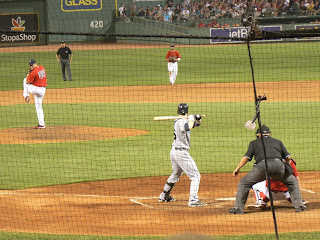 Did a little behind-screen action late in the game. Papelbon got the save. 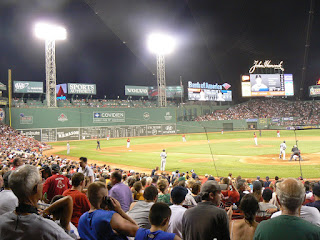 View from that seat. Then I went home and drank a Hershey bar I'd left in the cupboard. I've seen candy bars get soft in the heat before, but this was ruh-Dick.

Comments:
You got a ball in Section 36!