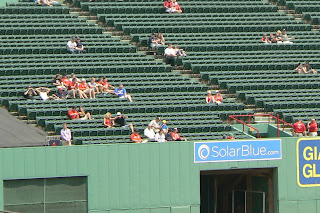 Got a front row seat in CF section 36 a few days ago from redsox.com. Above, the kid in white in row one is in my spot. 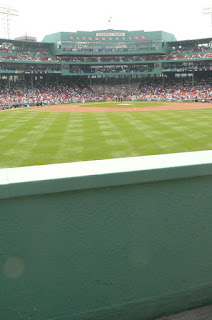 And here was my view. Was a little worried about the people who would be passing front of me. But with 34 and 35 closed for the afternoon game, only the people in the left side of 36 were passing, and they mostly kept it to between innings. The key is, there was never a logjam, so it was rare someone would cross right on the pitch. Plus, I have a working neck, so....


Video I shot from the top of the bleachers. The wind you hear was great because it was the only thing cooling us down. The sun was blazin' through the thin cloud layer. All I kept hearing from fans around me was "tornado warning." Later, they hit Springfield. I'm sure you've seen the crazy video of the tornado crossing the river. 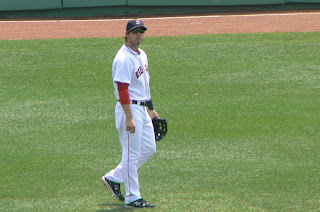 Reddick in right. Oh, so there was the most obnoxious person in the world right next to me. I was ready to just leave the area--but fortunately she did pretty quickly, and two average quiet Joes sat next to me. For some reason, lately (last few years) no one thinks to stand for the 7th inning stretch. They wait till it's announced that they should stand. Today, right when the top of the seventh ended, I stood, prepared to do the extra-fun "turn around and lean against CF wall" thing that only the front row gets to do--and the guy next to me did it too. So I knew that probably meant that while I was constantly correcting the idiotic comments from fans around us in my head, he was too. 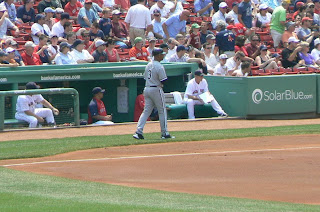 "My day" superstar Harold Baines in the ballpark. Pat used to call this guy "Blind and Deaf" when we were little. And I'll leave it at that. 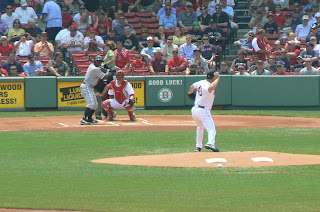 Tim Wakefield throwing the game's first pitch. I had the "Yankee Stadium '79" view. Wake was staked to a 3-0 lead but sadly we did not win. But Tim did add some days to his "all-time oldest Red Sox player" record, which he set earlier this year. 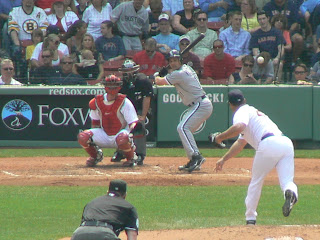 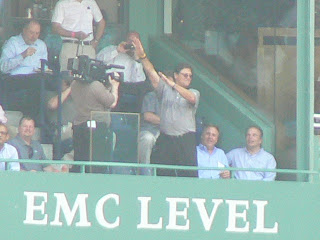 While Fisk was watching himself wave the ball fair on the board (note, before they cut to the live shot of him using the camera you see in this pic), he went into the full Fisk wave motion! I have three shots of this, I should do a series.

The ump screwed us in this game. After we went up 3-0, the White Sox got one in the fourth, and then the fifth was a mess. Wake walked the first guy. Next guy pops up down the right field line. Pedroia goes over and misses it. (Sure enough, looking at it now, it was called a single. Maybe I'm wrong, but from where I sat, all the ball did was hit him in the glove.) Then we get a double play ball, but the throw to first is low and Adrian can't scoop it out. First and third, one out, still 3-1 us. Then the runner bolts for second and we were ready for it with a pitch out. If you've ever played Little League, you know a first and third situation can lead to a national disaster for the defense. But, we were able to pull it off, getting the guy in a rundown while keeping the other runner at third. Pedroia finally tags the guy and we're in business. Except the fuckin' ump calls him safe! It looked like they practically collided, I don't see how a tag wouldn't have been made. After getting home and seeing the replay, I see where maybe the ump could be fooled by the sweeping tag, thinking Dustin just missed the guy's back. But I can't see how he didn't notice Dustin's glove smashing into the dude. Terrible call. Our reward for successfully pulling off a difficult play is no out, and a runner moves up. Then we get what should have been the fourth out on a ground out that scores a run. And at some point, a pop-up lands harmlessly by the visitors' on deck area. Salty took a wrong turn. So there are five outs for ya. Then Quentin doubles in the tying run before we finally get the sixth out.

Granted, after they took the lead the next inning, we did tie it on a Papi dong, before the White Sox added three more for a 7-4 win. But that inning is what changed this from Wake's 182nd Red Sox win to a pukebarf.

After that great road trip, we get the ChiSox at home, and get swept. Meanwhile the Yanks have to go west, but they win every single time. Not the way we planned it at all. We're two back but still in second.

Comments:
Oh and I got to drive home in the tornado warning. All I saw was dark skies and awesome lightning. The type of bolts that go all the way down the sky and just stay there, long enough for you to study them.

I approve of the seat selection!