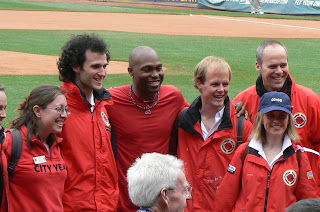 Discovered a new place where you can park for free. A little over a mile from Fenway, but exercise is a good thing so I walked it even though I could have hopped on the T. Only player on the field when I got inside was Torii Hunter, posing for pics with people from City Year. Isn't it weird how he's not the tallest person in this group of non-athletes? That's somehow odd to me. Something about Gammons being in the shot cracks me up too. Like he's laughing and smiling along with everybody as if he's part of the group. 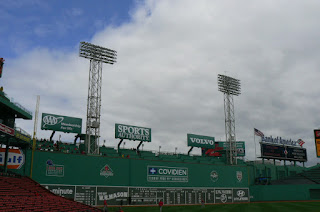 What a weird day. Sun, clouds, rain, rinse, repeat. In this shot you see the beautiful warm day on the left and the gray chilly day on the right. 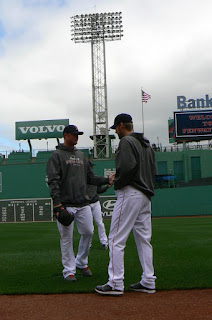 I saw the Red Sox pitchers going out to stretch in right field so, after the absolutely ridiculous new Fenway tradition of keeping the fans between the bases until 1.5 hours before the game (Even if they don't want us underneath because nothing's open yet, why not still let us roam around anywhere within the "seating bowl"? We all stand there grouped up like idiots waiting for the ushers to allow us to pass when the time comes. So pointless.), I went out there to get some shots on this batting practice-free day. Above, Lester and Bard. 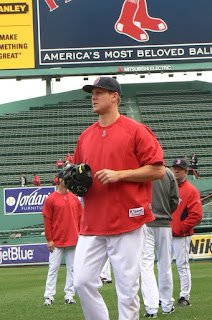 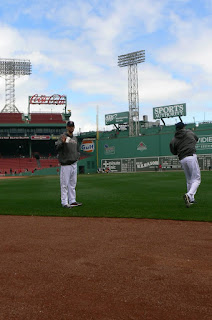 Bard waving at me. (Meaning someone near me who said his name.) 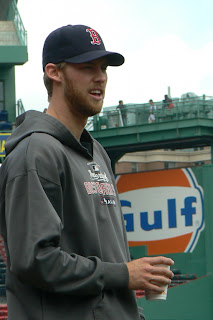 Daniel Bard chooses Gulf when he wants to spend $4.07 per gallon. 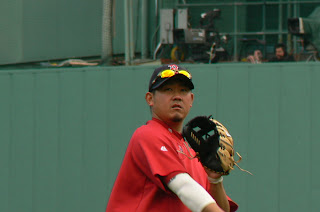 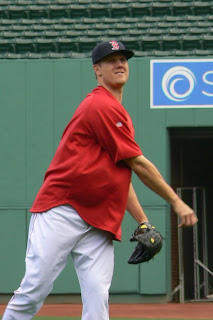 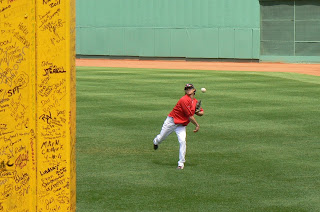 Buchholz and the pole.

I used a technique I've had in mind for years. I had a standing room ticket, but I used my ipod touch to go on the scalper ticket sites and see what great seats they had available right before game time. If they're still for sale, no one has them. So I found two seats available behind the third base dugout, row C. I could see that spot from where I was, and the row of four was empty. So I went down there and hoped nobody would buy those tickets. In the first, four guys came. That made no sense--until I realized the four empty seats in the front row, two ahead of me, WERE row C. I'd been in row E. (Yes, I should have known this or at least looked at the row letter as I sat down--it's not like I'm not aware of Fenway's seating quirks....) So now I'm feeling really good, as even if one group of two arrives, I'm still gold to stay in one of the other two empties. I made it till the fourth, when finally three people came, confusing me even more, talking about how they had that box plus a suite up top. They left and two more girls came, and by that time I was happy with my four innings in the front row so I took off. (Even though there were other empties all around since it was a weekday afternoon game, but it gets uncomfortable feeling like you could get taken down at any moment.) Now that you've read or skimmed/skipped the story, here's the view: 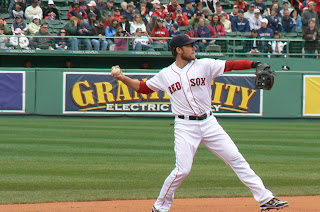 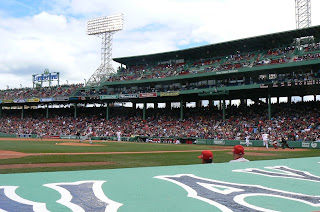 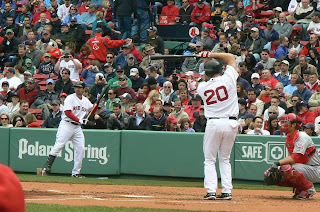 Youk close-up with Adrian on deck. 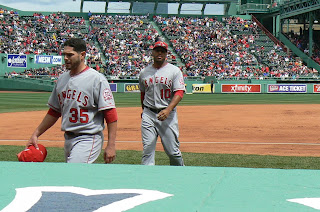 Kim's a Vernon Wells fan. So I toook an inordinate number of shots of him. 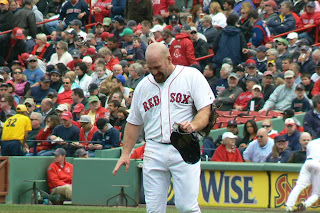 Youk throwin' brow-sweat to the ground. (Not joking, that's what he was doing here.) 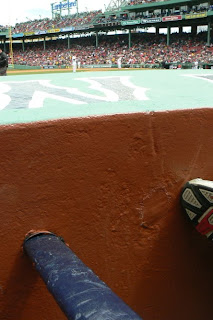 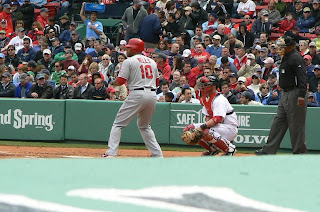 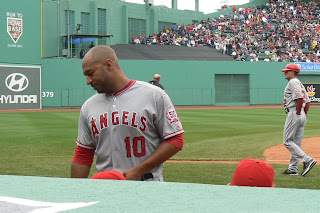 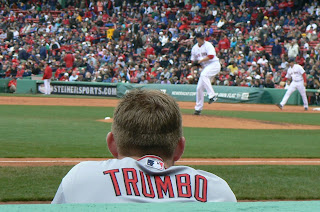 Trumbo looks on as Lackey prepares to bed shit. 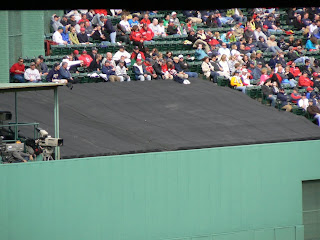 Now I'm back up in the standing room. I noticed that they left a few rows open for fans in section 35 above the batter's eye. Usually it covers all of 34/35. 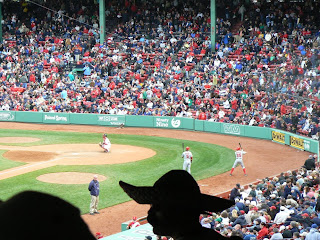 Lots of sombreros in the crowd on this Cinco de Mayo. 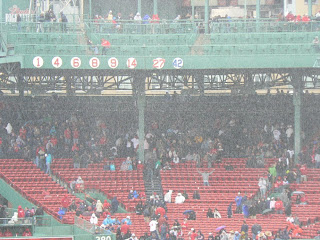 Here comes the rain again, and many of the fans who stuck around in this blowout went up under cover. 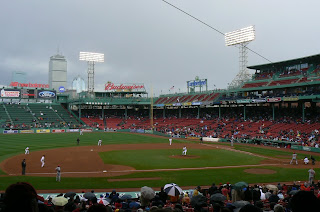 I kept waiting for a rainbow. I was seeing phantom rainbows! It was the perfect day for it. 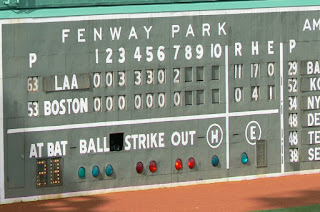 As you can see, suddenly it's bright and sunny again. Though the scoreboard is quite depressing. 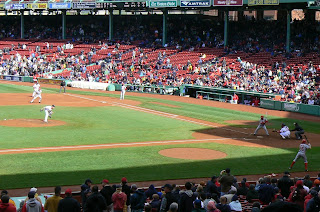 Rich Hill's first pitch with the Red Sox of 2011. Lots of people in the boxes are standing, because they didn't want to sit back down in the now-soaked seats. I later went down there again, armed with napkins. 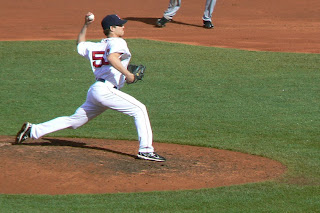 Hill on the himself. 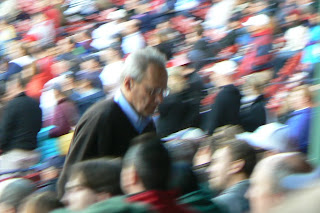 I took better shots of Lucchino, but I like the crazy motion of this one.

My mile-plus walk backfired as it rained on my way back to the car. But later, I got my rainbow. It was a full arc, and was actually a double if you look closely. Or even if you don't: 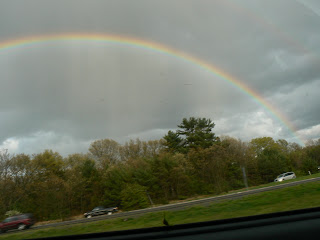 Comments:
I'm so stupid--I couldn't figure out why folks were standing after the rain!

I have my letter to Larry L almost ready to go imploring them to let folks roam the park again. I think they're paying as many folks to tell fans they can't do something as they would need just to rope off the exits from the walkway to the parts of the concourse they don't want open. And I'm baffled that they expand the concessions and then don't let people into them early.

The rainbow was the best part of the game!

Speaking of expanded concessions, I asked the woman at the pizza counter on the Big Concourse about Jamba Juice. (The press release said that's where it would be.) She just shook her head. Wouldn't speak. Shook as if to say "don't believe that in a million years."

Jere, I just noticed this tonight and of course thought of you... Have you noticed the new Dunkin Donuts commercial with Pedey and Crawford that they show every inning has the OLD LOGO hanging on the clubhouse wall? D'oh!

Ha, YES, two old logos, on left side of screen on clubhouse wall (which I think is a fake clubhouse or maybe the Ft. Myers one?). Was gonna include it in my next update about who's new and who's still old, so to speak.

Thanks for thinkin' of me on that one!