The Throwback Game, Part 2: The Game 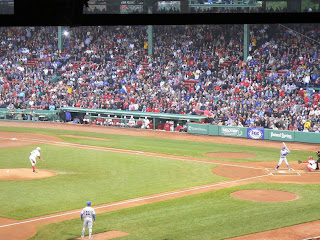 I was standing in the 3rd base deck, first at this spot for first pitch, but then after moving away from some annoying talkers, at the closest spot to home plate. And when the two guys in front of me moved to seats right in front of us, I grabbed their slot at the shelf. (Of course, the real ticket-holders took their seats right away--they should have kept the shelf spot! Oh well, dem's da breaks/unwritten rules of Fenway SRO.) There was a pole between mound and plate but you learn to live with that. 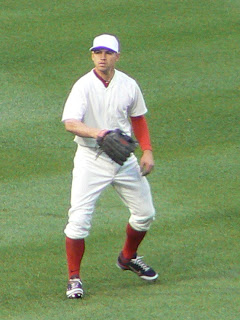 Ellsbury had a Nike logo on his socks. I'm also wondering what was going on under those socks for all the Boston players. The 1918 uni should have had a red/white stripe. In some of my pics I see what appears to be a stripe underneath the red sock on some players. 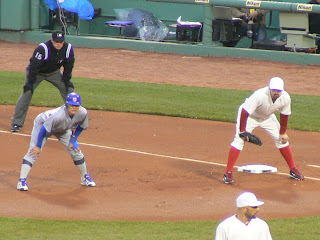 Aceves was your starter, and after giving up an early run, he was fine. 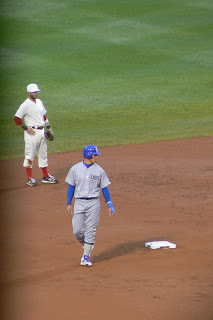 Dustin Pedroia. There were definitely a lot of Cubs fans at Fenway. They've been waiting since 1918, so.... 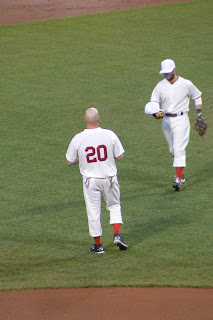 Dustin gives Youk his white hat (which looked more like Russell Simmons' hat than a 1918 cap). 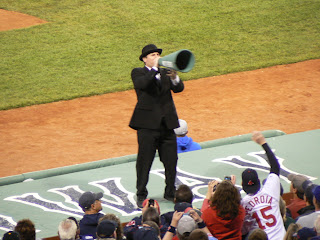 Carl Beane told us that the third inning would be old-timey--no electronic scoreboards on, no music, no announcements. As it turns out, they did it for two full innings, with guys with megaphones on each dugout announcing the batters. From where I was, I couldn't quite hear a word our megaphone guy said, as you'll see in the video below.

Papi hit a homer, his 300th in a Red Sox uniform. You'll notice in the video below no music played as he crossed the plate. Just cheering, the way it oughtta be.

One thing I didn't get a pic of was Marlon Byrd getting hit in the head with a pitch. He went down and started doing bicycle kicks like he thought he was gonna die. He quickly got up and was led off the field, though. Right in the path of that pole! So I just have a blurry shot of half of him with a towel to his head.

Oh, and about that death cloud. It finally reached us just before the game. The moment it did, you could see your breath. I got a great video of it rolling in from right field:

Fenway aficionados might be saying, Nah that's just smoke from the right field roof deck from when they cook stuff. And yes, that does happen, but this stuff was going by all night. By the time I got down to the good seats in the 8th, I realized that this stuff was making everything wet. It wasn't rain--not one umbrella went up--but it left moisture drops all over everything. The game was played in a cloud. 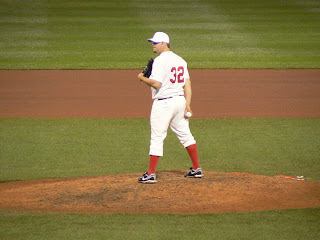 So here I am in the loge, as plenty of cold, miserable people had slowly started streaming out in the 6th. Matt Albers came in. I wondered where Daniel Bard was, with the Sox holding a two-run lead after seven, 3-1. 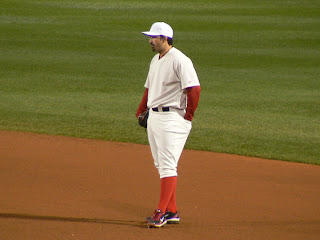 Gonzalez at first. Yeah, so I had watched 7 normal innings of baseball from the SRO. Came down for what I thought would be an inning and a half of close-up picture taking, sweet carolinian celebrations, and a Pap save. What I got was something entirely different. After two singles and a walk, and no one warming in the pen, Albers goes 3-2 on Carlos Pena. And he walks him. 3-2. Reed Johnson lines one to left. Crawford goes back, but just can't get to it, and it's a two-run double. 4-3 Cubs, still nobody out. SorryAsshole hits a high pop-up behind short. It's one of those where the runner at third's gonna be tagging and at least bluff, so you gotta be ready to fire home. Jed Lowrie was obviously thinking about that, too...instead of catching the ball. The guy bolts home and now it's 5-3. (I noticed Soriano wasn't quite at first and didn't seem to have any intention of getting there, but Jed had to throw home to try to get that runner.) 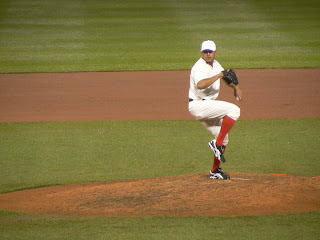 Finally Tito takes out Albers, and brings in Franklin Morales, the guy who throws hard but doesn't know where it's going. Above is a picture of his first pitch in a Red Sox uniform. And as you can see, he likes to show the batters his grip so they know what's coming. And Jeff Baker hit a megaton bomb to left center, that just missed going out. 6-3 Cubs, first and second. Cubs fans are going crazy. Even after two batters this inning, when Albers would do the fake to third, look at first move, it felt like the entire crowd would explode in boos, giving you a sense of how many Cubs fans were there. 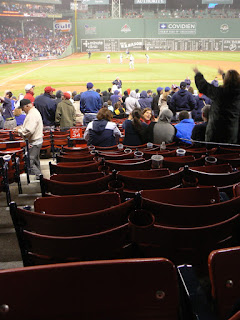 Pretty much my entire loge box had gone home. After a strikeout and a walk to load the bases, Drew Barney comes up. I like that this guy grew up a Nomar/Red Sox fan in Oregon--and his sister was graduating from BC this weekend, too. He flies out to right field. Throw to the plate...and the guy goes back to third. However, the guy at second had tagged and is almost at third, too! Sweet. Tek will just run to the bag and one guy will be tagged out, a gift from the Cubs and the inning is over. But no! Tek throws to Youk for some reason, and it goes past him into left field! So now the first guy scores, and as the second guy rounds third, Crawford fires home from left field, and it gets past everybody! The pitcher Morales was down there, Tek was trying to get back there...Gonzalez ended up finally retrieving the ball. By then it's 8-3, and still a man at third. Castro doubles him home for the 8th run of the inning, before we finally get the last out. 9-3 as we go bottom 8. 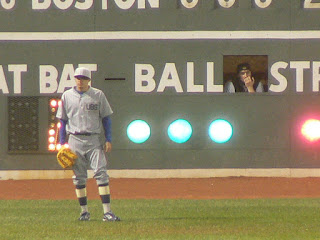 Dude in the scoreboard was busy....and this Cub was showing as much sock as anybody. It was supposed to be "5-color," and this guy gave us four. 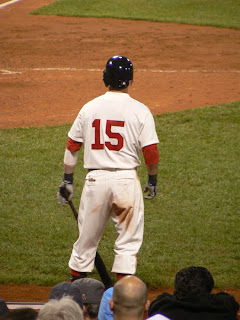 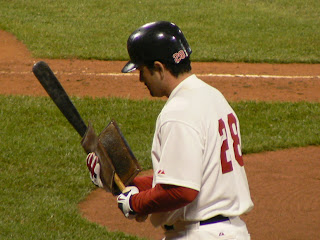 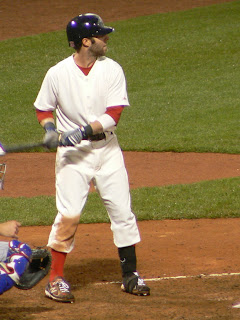 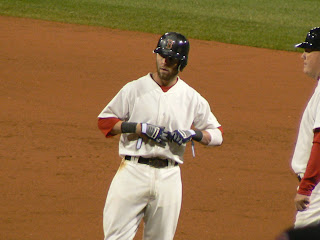 More Dustin. He and the rest of us are pissed. 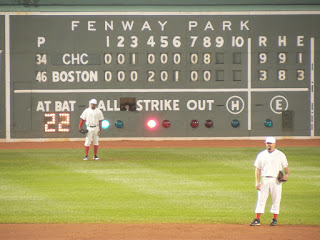 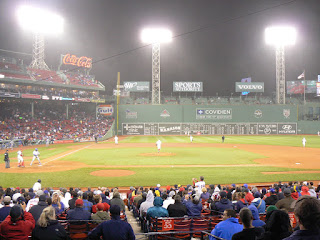 Fenway in the mist. The long, long inning meant I had to be out in this much longer than I thought. Why can't it just be summer already? I thought leaving the park and being in motion on my long walk to the car would make me feel a little better, but no, it was like I was in one of those DieHard battery ads, you know, the ones that start, "Buffalo, New York...." And this was on what had been a near-gorgeous day! I had short sleeves on in batting practice! And tonight's gonna be the colder night! Remember how pissed I was months ago that all three games of this weekend series would be at night? I'm even more pissed now. 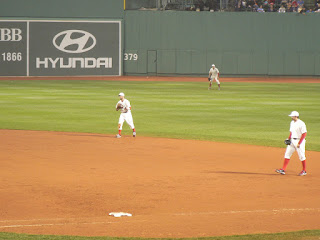 Some throwbax in the field. 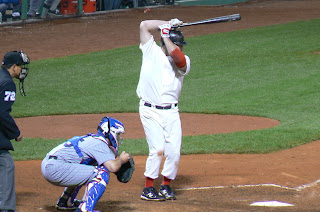 The classic Youk stance with nothing on the jersey. 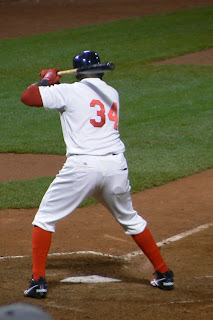 Papi ended it. We had been six outs away from being in first place by ourselves, since Tampa had lost. Instead, we're in third. We need to erase this one quickly with a win tonight.

Comments:
Jere, I too had a great time for seven. Your pics were great. Thanks.