Just a few shots from tonight... 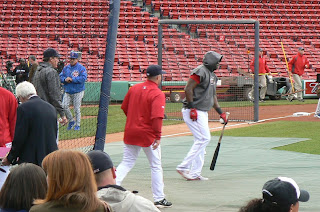 Papi in a hood, but with no sleeves. Was cold but I was packin' extra layers and I was okay in the grandstand. [Edited to add: I forgot to mention--as you can see, the Red Sox were hitting when gates opened! First time in 2011 I got to see them take BP, if only for a few minutes. (I've opted to not get the RSN early entry deal this year, so far anyway.)] 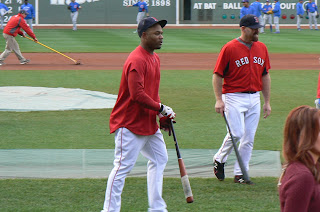 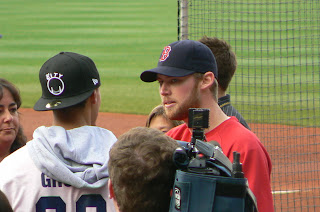 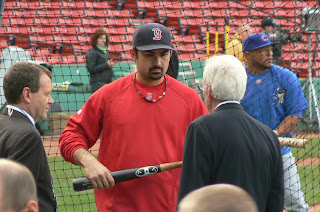 Adrian Gonzalez talking to Gammons and that other dude. 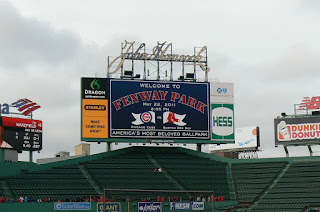 So I guess the off-white scoreboard background was just for Turn Back the Clock Night. 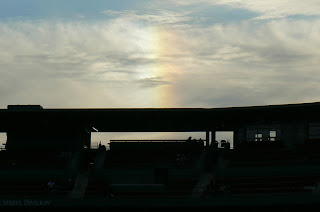 One of those sun rainbows. 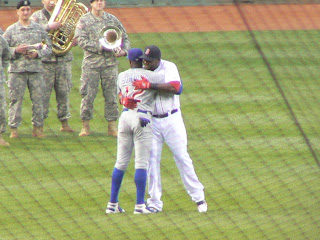 So this is the one game of the year where I got a good seat for myself--first row of grandstand, right at the 21-22 pole. Great view except for the screen. Above, Papi hugs SorryAsshole. 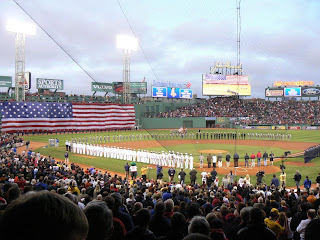 My view of the field. Some military shit was going on. I hate how they now do the Yankee Stadium thing of saying that the military protects "our way of life." 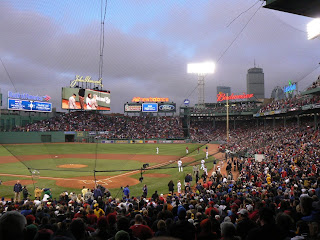 And the right field view. 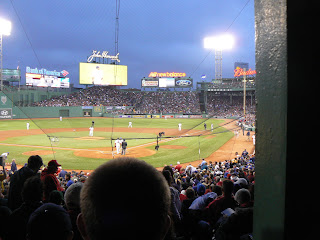 This is the actual view, including the pole. It loomed, but it didn't block any of the field. 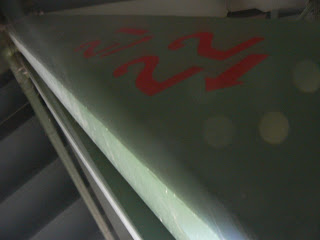 The pole up close. 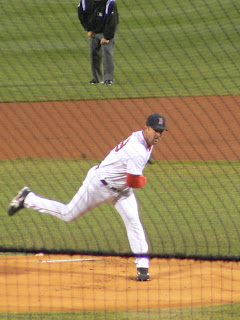 In 1995 I was 19 years old and I saw Tim Wakefield pitch for the Red Sox at Fenway. Now I'm 35 and here I am still going to Fenway to watch Timmy pitch. He finally got his 180th win in a Sox uni tonight, inching closer to the record. 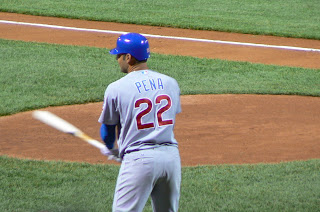 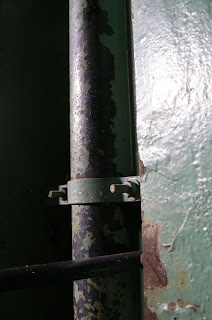 The pole inside the pole. 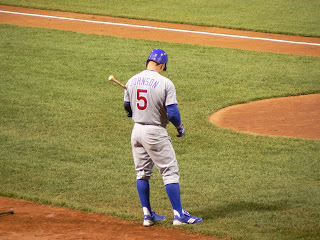 Reed Johnson and his stirrups. 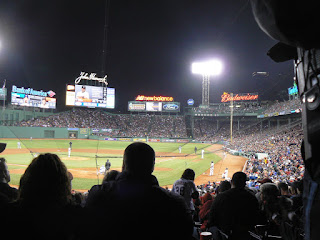 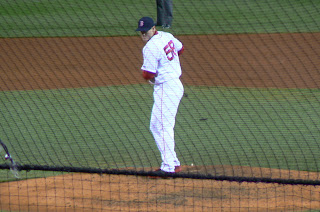 Pap got the save. 5-1 win. Yanks and Tampa won too. Incredibly, the Yanks were down 3-1 and scored 8 in a late inning, just like the Cubs against us on Saturday. The key to the Subway Series weekends is to keep pace, and we did.

I feel like had more to say about this game... uh...well there's one thing I can think of: On that catwalk that goes from Gate A to the back of the grandstand by home plate, there are restrooms. I had never gone into that men's room until tonight. And I was surprised to see thin windows over the futuristic urinals. So you can pee and look out at everybody on Yawkey Way. So when you're out there, just know that peeing men ARE watching you.

Comments:
Was "that other dude" Buster Olney? And is Gammons still with the MLB Network? Haven't seen him around...

Gammons has been all over NESN, on pre-and post-, and even filling in for Remy at least once. I don't know what other networks he's working with right now, but he might just be sticking to NESN in his post-illness days.

I bet this was a particularly fun one to watch. I'm particularly interested in what it must have felt like to sit there without a sound system. Must have been amazing!

The no-sound system was for the game before with the throwback uniforms. I do have a couple videos--the megaphone man, Papi crossing the plate without the home run music playing--in the previous post about it.

It was cool to have it like that for two innings--but Fenway's always a great place to see a game anyway.

Pretty sure Gammons was briefly on MLB Network after his illness. I don't get NESN (boo!), so no wonder I haven't seen him in a while.