Some Pics From Today

I don't like the new Fenway opening style. Again when we got in, Red Sox BP was already over. And though both Gate A and D open 2 hours before game time (while the rest are 1.5), if you go in Gate D, you still enter the actual park over at Gate A so you're not going right in. Also, the ticket scanners are incredibly slow. It took so long to get to the front of a line we were maybe 20th on. By the time we were behind one other twosome, we still didn't get in for at least a minute since it took that long for them to scan those people's tickets. Then we finally get in, and they're herding everyone to one stairway, in through one walkway to the field, where you can only go between the bases. UNHEARD OF at Fenway. Once that initial half-hour ended and the rest of the gates opened, finally anyone could go anywhere. But I hope this isn't the new way at Fenway. It's not like this is some bonus half-hour. ALL gates used to open two hours before game time, and you could go in any of them and go to any spot you wanted and roam freely. Why would they want to take that away? And we don't see Red Sox batting practice any more on top of it! Go back to normal, Fenway! 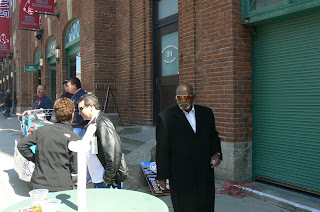 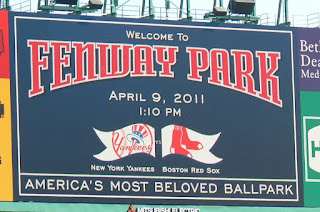 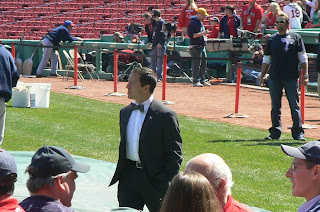 Didn't realize Millar was in this shot till now! I took this to show Rosenthal's bow tie. I saw him yesterday and he didn't have it on. If you have a bow tie and you go to the first two games, why wouldn't you wear the thing for Opening Day? 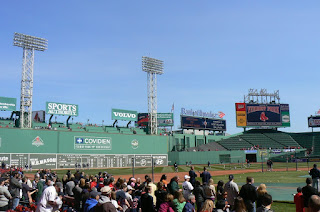 Nice day. Not as cold as yesterday. Fine once the sun hit us. 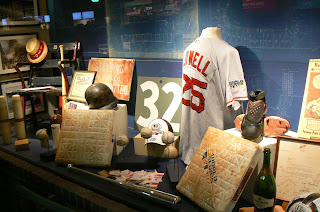 They have a spot now for some old Fenway stuff.

Some shots of the new boards from on high: 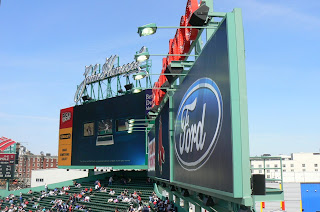 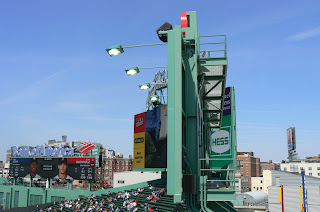 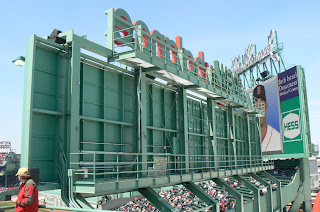 What's up with that second "new" behind the other one on the new balance sign? Will they raise it up on certain occasions? "Somebody got an inside-the-park home run on heroin...that's NEW!" 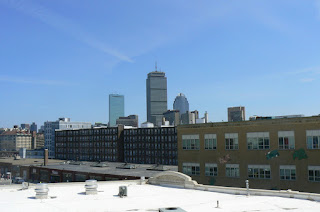 Boston on a beautiful April day. 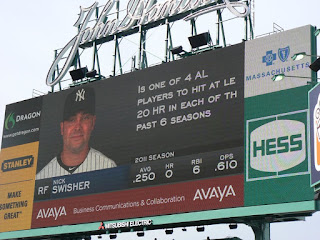 Look at how the new board cut off three letters on the right side....

Comments:
just fyi, if you purchase a rsn card(cheapest is $15), you can get in earlier and watch bp on the Monster. And the rsn card allows you in at one of the other gates I think

Yeah as I said the other day I still haven't decided whether I'm gonna sign u this year. But with these new developments I may have to!

As we stood in the infield seats, I could see the RSN people in the Monster Seats and the bleachers. So it was weird, we were like two distinct groups who were stuck in our respective areas. But this was during the 2 - 1.5 hours before game time slot which last year was open to all fans, all gates, all areas.

And yeah sorry I missed you in Texas!

You were at the game on Saturday? I was right next to Fenway at the same time, hitting up a few stores and stuff. Stupidly stumbled my way into a whole ton of traffic on Commonweath Ave around 12:30, on my way to In Your Ear. And guess what I found once I got there -- a copy of the Pac Men "Ready" 7" (#404/500) that you were never kind enough to send to me.

Awesome! Yes it's called "Ready!" and it came out really low so you have to turn it UP. (You would have gotten #300-something if you'd gone to that M-13 show!) But I still wanna send you our cd which is 18 songs and recorded at Trod Nossel as opposed to at "a basement." So feel free to send me yr mailing address.

(Weird, I went to that game with my old Pac-Men bandmate and we talked about your blog that day. His band with Bruce and Todd 76 and a rapper guy named C-Reed is pretty cool, he played it for me in the car....)

Yeah, that's the something-something All Stars, right? I forget the exact name...

I should know this! Checking old e-mails... found it! DIZTRICT ALLSTARZ. There's at least one YouTube vid of them too.

Yeah, I've seen some video stuff -- they've got a Facebook, if I remember correctly. It's been a few months since I looked into it.

Where's the display of "old Fenway stuff" including the Lowell jersey? How have I not seen this yet?

That makes sense since they're near the logos and I think you said that was the one spot you didn't go to. In other words, enter at Gate D and turn right and it's on your left.