Neither Kim nor I had ever been to the site of the Station Night Club fire before today. We had Hair Nation on the radio in tribute as we drove toward the place, and as the GPS told us we were .4 miles away, sure enough, a Great White song came on. See it in the video above. Some pics below: 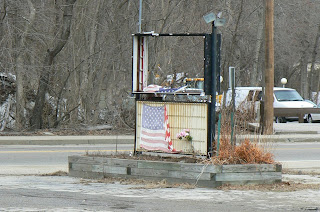 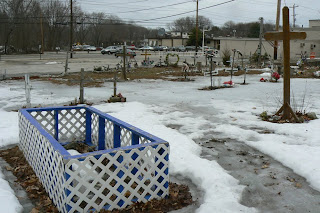 I don't know what this little coop is for--I thought maybe it was part of the building that remained or something but probably not since it's right in the middle. 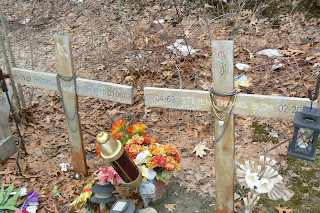 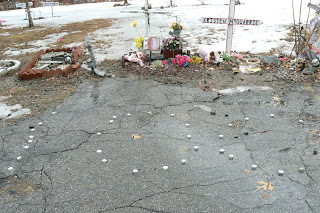 Candles in the shape of a "100" for the number of people that died.

Comments:
I've been watching the video in stunned horror. Seeing for the first time today. A sprinkler system. That's all it would have taken to avoid the misery the families are probably still going through. simply horrifying. My heart goes out to all. The victims, the families, and the entire community. Devestating. - Mike from Jersey

thank you for your documentation of this memorial. a definite tragedy that will never be forgotten, by the community and for those of us who witnessed the events unfolding that night from far away via the internet.

Sure. I will have to draw attention to this post soon since it's gotten some recent comments. The anniversary is coming up too....

IT"S A SHAME that so many people lost there life"s including my friend TY LONGLEY on that night on 2-20-03 I hope that the lot remains the way the video shows it as a memorial place MAY ALL THE PEOPLE THAT PASSED AWAY THAT NIGHT REST IN PEACE THEY WILL NEVER BE FORGOT R.I.P TY LONGLEY .......YOUR FRIEND DWAYNE BOTTCHER.