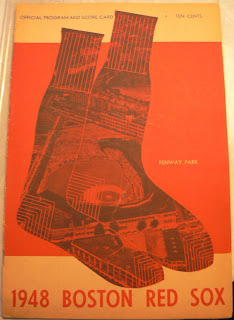 Got this on ebay for under $15. These pics go really big when you click. Notice how the cover pic of Fenway Park actually shows the whole neighborhood, looking east. 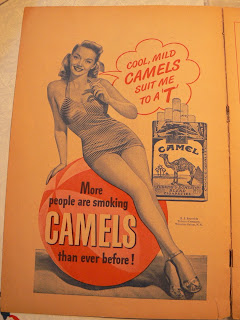 It's a two-color deal, red and blue. This woman is not referring to the "T," which came into existence about 15 years later. 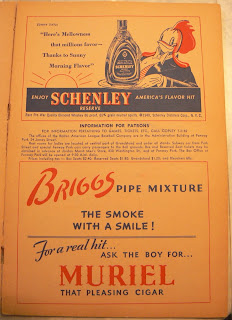 Here's what I've learned about 1948 from this program: Drinking and smoking are good for you, and everyone's a man. Here we've got some whiskey and pipe stuff. That little blurb between the two ads--that's the spot where all the actual information is throughout the book. In this case, it tells you some info about Fenway, including the $2 cost of box seats. Oh, and see that "ask the boy" line? Remember that. 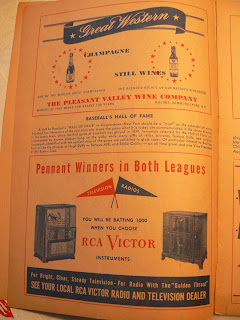 Here, between wine and TVs/radios, they tell you to visit the Hall of Fame. Even in 1948, advertisers thought baseball fans just don't understand regular English--if we don't hear that your product is a "hit" or a "home run" or that we can "catch" its awesomeness, we're completely clueless. 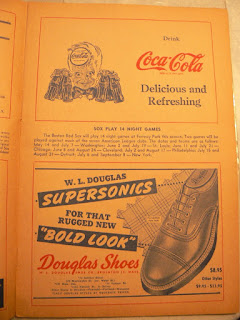 "I've got a bottle cap lodged in my skull!" And I love the unnecessary quote marks on "bold look." And look at that, a whole 14 night games in '48. 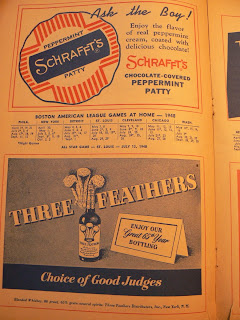 There's that "ask the boy" line again. At first I thought this was a racist thing, like, "While at your local market, find the black kid and he'll get you what you need." But then, with Kim's help, I realized "the boys" must be the Fenway Park vendors. (But did they really go around selling "pipe mixture" along with non-York peppermint patties and ginger ale? I need to ask the boy. Or a "good judge.") 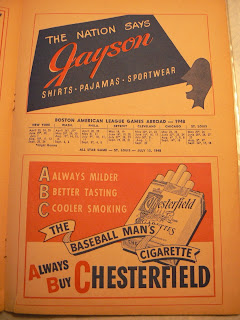 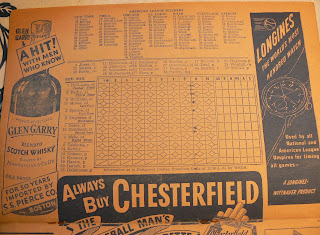 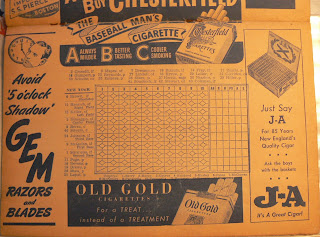 Now for the centerfold--the scorecard. The pre-printed scorecard! Lineups! I tried to figure out what game this was, realizing that changes could be made to the lineups post-printing. I believe it is Sunday, May 2nd. It's definitely the May series, since Cliff Mapes is listed as #3, and Babe's number would be retired in June of that year. (So Mapes was the last Yankee to wear 3, the first the wear 13, which he switched to after the Ruth thing, and also wore #7 during Mantle's first season.) That day, back-to-back dongs by Ted Williams and Vern Stephens in the 8th put the Yanks away for a 7-1 Red Sox victory. 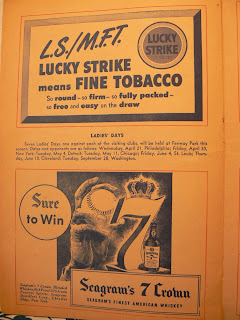 Back to the ad fest, more booze and cigs, and Ladies Days. 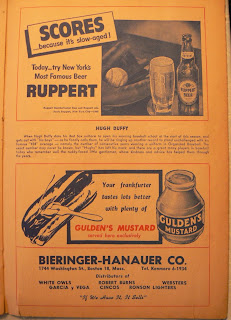 Jacob Ruppert's beer? They might as well put an ad for No No Nanette in there! 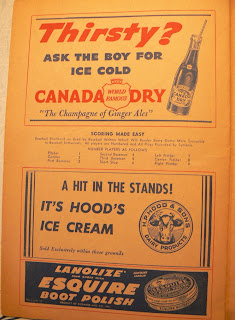 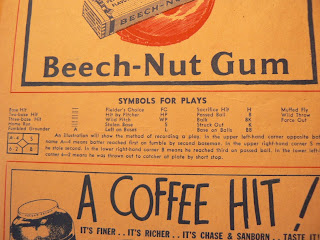 Between coffee and gum we've got instructions on scoring the game. This is very interesting. They called an error a fumble, so instead of marking "E," you'd mark..."A"? There are some other odd notations in there. And they have the runners going around the bases the wrong way, starting at top left. 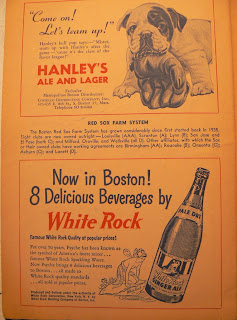 Check out our farm teams in the middle here. 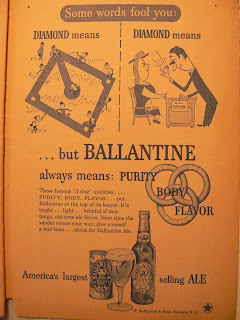 Other words frighten and confuse you, but our product name is quite easy to understand? You're stretchin' it, Ballantine. 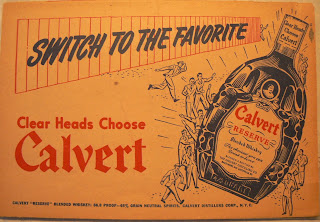 And on the back cover, tiny men everywhere lose their shit over Calvert whiskey.

Comments:
Just noticed one of the ads on the scorecard page says "ask the boys with the baskets," confirming it is the vendors.

And also on the scorecard, the watch ad saying umpires time the games.

A for "Fumbled Grounder" is bizarre. What do they have for "Muffed Fly" and "Wild Throw"? (Is that B for passed ball?)

I wonder if other teams had weird shit like this on their scorecards.

Muffed Fly is O, Wild Throw is WT, and Force Out is XX.

I've never seen anything other than E for error in my whole life, till now.