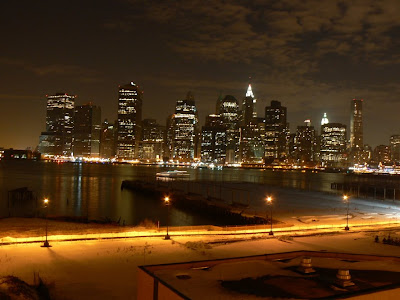 We were a little worried about finding parking in New York because of the snow. And when we got to the street below Chan's apartment on the Upper East Side, so many cars were completely plowed in, it looked like we made a huge mistake. However, as we turned the corner on to the avenue, there was a spot. No searching, hardly any snow to deal with, and you could see the spot from Chan's window. Best spot I ever got there--and since all the parking rules were suspended, we didn't even have to pay the meter. Parked from 5:00 p.m. New Year's Eve through 10:00 p.m. New Year's Day for free, basically at Chan's door. After a very quick ride, too--note to future me: driving in on New Year's Eve IS the way to go. 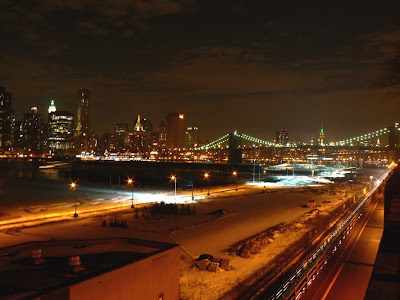 So Kim and I wanted to do something different, and be away from major crowds. I decided we should do a Brooklyn Bridge New Year's Eve. We found a nice Indian place on the Brooklyn side, took the subway down there, and had a great meal--and there were no other people eating the whole time we were there! I felt bad, they had all the tables set up nicely. But it was also good to have the place to ourselves. We and the staff watched the last 10 of Larry King's Top 25 moments, and then Kim and I headed to the Promenade at 10:00. In the top pic, you see lower Manhattan. In the next one, the Bridge, with the Empire State Building still lit up in Xmas colors.

The Promenade was also surprisingly empty. It wasn't even shoveled, except for a path to get through. Only a handful of people had come out to watch the fireworks over the Statue of Liberty and enjoy the view. After hanging out there for a while, we went over to the bridge and started walking across. 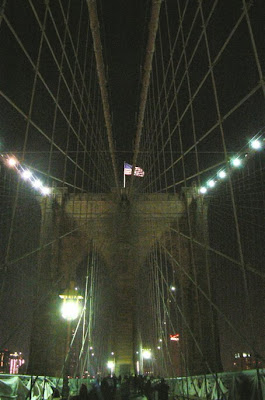 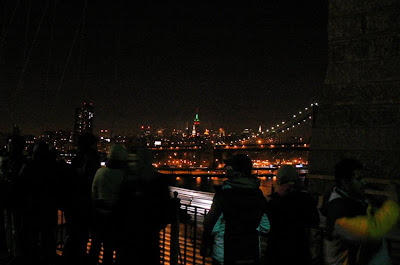 This shot is looking back toward Brooklyn: 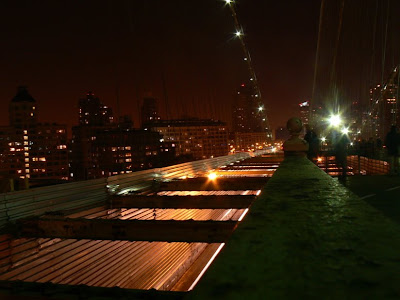 We decided to watch the calendar flip from the tower at the Brooklyn side. There was a crowd there, but obviously there's only enough room for a limited number of people. You can (kinda) see from my Touch that it's almost 12. The Statue of Liberty is at left: 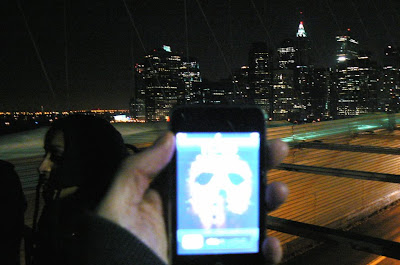 We wondered what the "countdown" would be like. Turns out, somebody just picked a random moment and started from 10. I knew they were way early, but those fools gave everyone no choice but to begin the celebration when THEY hit zero. Sure enough, almost a minute later the fireworks finally started, and that's when we knew it was really 2011.

It was quite a logjam getting to the Manhattan side--I feel like a lot of people had come on to the bridge from there and were now going back. But we made it, got on a waiting 5 train and shot right up to Chan's, and were in his apartment by 1 a.m. It was totally fine weather for midnight in January--though Kim, like most American women*, has circulation issues and couldn't feel her fingers. Oh and as for the craziness factor, it really wasn't bad. There was a girl on our train who was about as drunk as you can be and still be conscious, but she had her completely embarrassed mom and some guy just trying to keep her calm and quiet. She slammed her head on the wall and thought the guy had hit her. It was hilarious. Besides her, there wasn't much else. I expected a rowdy crowd to get on at 42nd Street, but even that was tame, just a few party hats.

New Year's Day, Chan joined us for some Magnolia and then a random Italian place, before Kim and I headed to see Pee-Wee. Here are some shots from Central Park on 1/1/11: 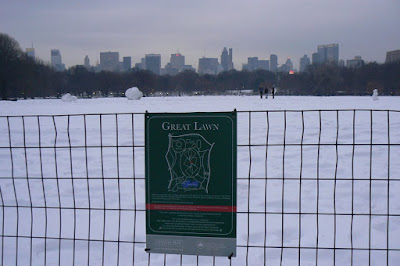