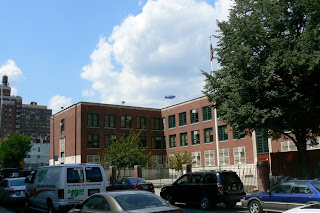 Near the top of Central Park, we headed farther west so we could walk up Broadway and/or Riverside Drive. Here's the blimp from 106th Street, headed to Yankee Stadium for the Sox-Yanks game, which was starting at 4 or so that day. 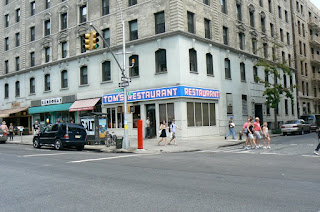 "Monk's Diner," as most of us know it from Seinfeld, at Broadway and 112th. 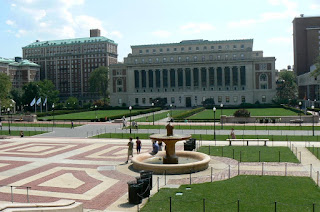 We saw Columbia U. at around 114th Street and decided to check out the campus. I immediately recognized the above view from Ghostbusters--the scene after the guys get kicked out of the university. The campus seems really cool, the way it's its own little world separate from the city streets around it. Yet surrounded by the awesomeness of New York City. Would be a fun place to go to school. I know, I know..."you never studied." 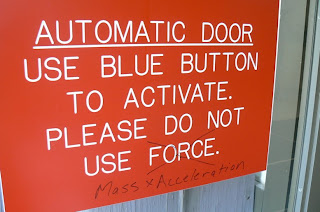 At the entrance to Columbia's physics building. We rested on the campus, and now I was thinking I must have broken a bone in my left foot. And the back of my right knee was a little iffy, too. But nothing was gonna stop me from finishing this lifelong dream of mine of walking the length of Manhattan. 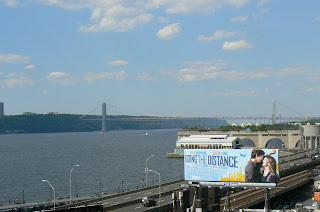 Now we're going along the Hudson River on Riverside Drive, still pretty far south of the George Washington Bridge. I didn't even notice the "Going the Distance" billboard--or at least didn't think about its relevance at the time.... 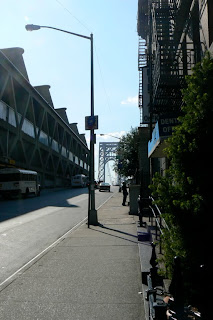 Now we're even with the GWB at around 179th, and I'm dyin'. Limping along and audibly moaning with each step. Chan had minor issues, not as bad as mine. 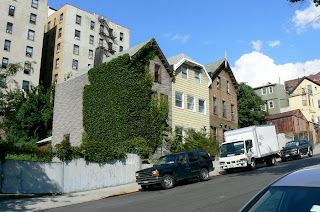 187th Street. You don't see many houses like these in Manhattan. Around this point, we were getting toward the very top. Our maps were electronic, and without a signal, we didn't know exactly which route to take. Again, there are two "northernmost" points depending on how you look at it. Both seemed to be in wooded areas. We then took a right turn at a fork, onto Fort George Ave instead of Fort George Hill. I thought we were entering Inwood Hill Park at the tip, but we were actually going around that big curve, and when we came out the other side, we couldn't understand why the streets were going down again, or how we could have possibly gone farther north. As you can see by the linked map, we were stuck in that little loop, and like Christopher Columbus before us, we mistook our destination for something else. I shot one last video from what I thought was the tip, which you can see on that Randomonium episode.

So we didn't technically make it. But we walked over 17 miles that day altogether. I made a map of our route, which is as accurate as I'm gonna get it based on my memory of the day.


View Length of Manhattan Walk in a larger map

It was about 5:30. Our goal was to get back to Saigon Grill on the west side for dinner. It was an excruciating walk to the subway (we didn't know where the nearest station was up at the top there), a long wait for a train, and more walking to the Grill, where I have to say, on the day in my life when I needed it the most, they were more on top of the water refills than any other group of restaurant waiters in history. I must have downed 20 glasses of water before the meal even came. And in another first--I just couldn't walk one more step. So I insisted on a cab ride from the restaurant to Chan's apartment, where I got off my feet for the night and had the best sleep of my life. My feet/legs were heeled within a couple of days. No surgery needed. The end.

Comments:
yeahhh!!! awesome story. and way to make it happen!

Nice walk. We tried that once from the top and got as far as 90th or so before quitting and getting Chinese food!

It's just east of Broadway, which must be what you meant, going up the hill to Wadsworth Ave.

Street Views shows the Key Food is still there!

That's the point where we started getting confused. I tried to get my Touch to work to pull up a map, but couldn't get a connection. I was so worried about continuing north on Broadway at that point, because it was a downhill, and it looked like we'd then have to go way uphill again, which I just couldn't do. So we decided to do the quick hill up to Wadsworth to get it over with, and continue north. That's when we ended up getting "lost" by taking that right curve....

That's cool you lived there. Seems nice up there.

Oh man, I can't believe you made it all the way up to 187 & Broadway and didn't continue on to Inwood Park and the blue bridge to the Bronx. But a valiant effort nonethless, well done!

Some other time, maybe start at 96 St - or even better, 125 St - and walk the last portion. So many great things to see in Harlem, Washington Heights and Inwood.

Now I have to go back and peruse your pics more carefully.

"We tried that once from the top and got as far as 90th or so before quitting and getting Chinese food!"

Oh yeah, you totally blew us away. We did a lot of walking in Manhattan and other boros, through all kinds of neighbourhoods and for all different reasons, but we never did the tip-to-tip walk. You came way closer than us.

I thought we were in Inwood, but when the streets started going back down, I knew something was wrong--and I knew all I wanted to do was not be walking anymore.

Our own fault for not having a real map with us. Terrible.

Yes, I should just go to see stuff up there next time, not just for the purpose of completing a goal. Coming from CT growing up, we'd always take the Henry Hudson bridge to get to the GW for our Jersey trips or the Meadowlands. So I have been up that way but only in a car.

You were so close to "Lou" Gorman Park ... a great place to eat lunch and watch the sun set.

I remember a park on our left with a bunch of domino games going on along the sidewalk. Looking at the map, it could have been along Gorman Park but we def. didn't go in.

(I also would have liked to see the John T Brush staircase on this trip--will have to do that on the next, more relaxed upper Manhattan trip.)

There are lots of cool staircases in the nabe. The one on W 187 St, connecting to Ft Washington Ave, looks like it could be Europe.

It's a nice nabe to walk around, lots of nice parks, river views, great Salvadorean and Dominican food. And of course the Cloisters.

Cool. One of our "family stories" involves the Cloisters. I'll have to tell it some time.

Nine years later, the Cloisters story: While driving past there, I was a kid in the back seat, and my mom told me about how it was based on people who would meditate--no talking. I asked, "What do they say at your door on Halloween, 'mmmmm mm mmmmm'?" (said with "trick or treat" intonation)