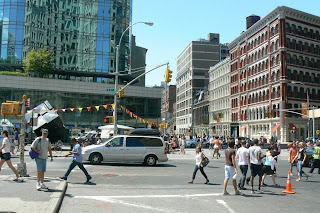 Looking back downtown after passing that spinny cube at Astor Place. 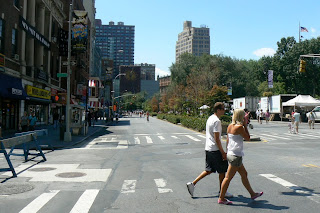 Now on Park Ave above Union Square Park, looking back downtown at the smokin' hole. At left you can see where the old Zen Palate was. It's now, sadly, a TGI Friday's. 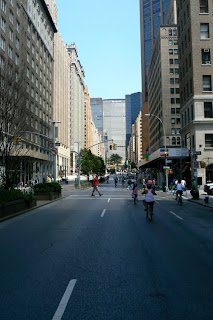 Getting close to Grand Central. The best part of the whole walk was this whole Summer Streets deal--so cool to walk up Park Avenue in the street. 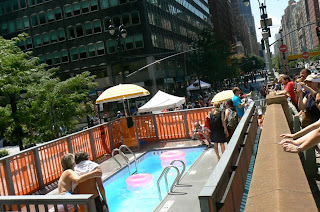 One of the infamous "dumpster pools," just south of Grand Central. 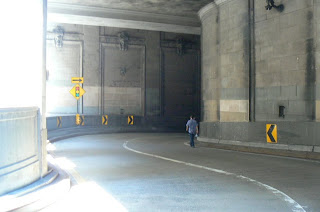 That road that goes around Grand Central--this is not a place you can walk normally. 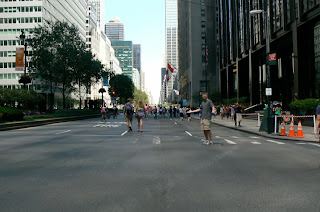 Chan on Park Avenue, somewhere in the 50s I think. We got to 72nd just as they were reopening the avenue. We were ushered to the side right around 70th. Then we headed over to Central Park. Above, a Hartford Whalers shirt in the park. 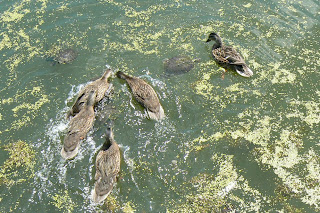 Ducks, turtles, and fish fight for food in the Turtle Pond in Central Park. We were already hurtin' in various places at this point. We'd probably walked 7 miles at this point and had somewhere close to that left to go. We continued to survive on water and summer treats from vendors along the way, figuring we'd have a big dinner at the end.