[I'm posting these all at once, but I have to divide them into parts to avoid my front page and archives getting screwed up by Blogger.] 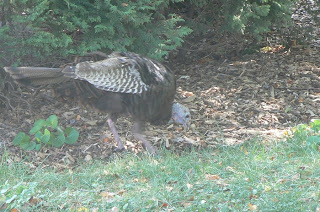 Got down to lower Manhattan around 10:30 a.m. (this was August 7th--see the video version on this very special edition of Randomonium). We would have done the walk from north to south, but we wanted to catch Summer Streets, which ended at 1 p.m., and went from the Brooklyn Bridge to 72nd Street along Lafayette Street and then Park Avenue. Above, a turkey hangin' out in Battery Park. 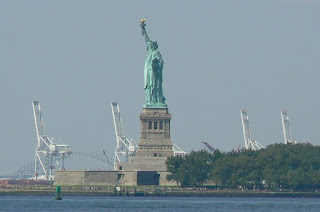 Lady Liberty. Okay, Manhattan runs north-south, but turned a little to the east. So the true southern tip differs from the "bottom-most point" were you to turn the island so the avenues are running exactly top-to-bottom. So I think the real southernmost point, not including docks that stick out, is at the Coast Guard Station. But the lowest point the other way would be... ...this spot. (And since you can't get into the Coast Guard building, this is as far down as you can go whichever way you're measuring....) (Here's the full map of our route for reference.) 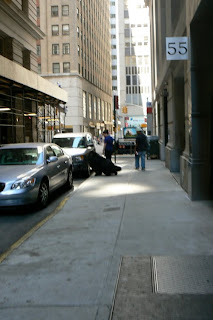 We walked around the Wall Street area (seeing this gigantic dog which is actually taking a dump in this blurry shot), got a bagel at a random place, and saw some movie/commercial/TV show shoots. We got a pretty perfect weather day for what we thought would be a 12.5 mile walk. 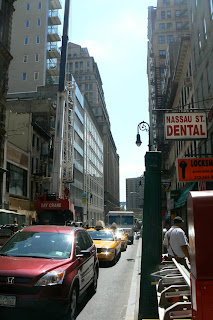 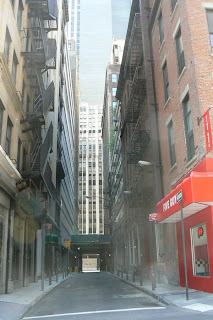 I thought the view down this alley was cool. Because you have to look at the picture for a while before you realize that that's not sky at the top, it's yet another building.