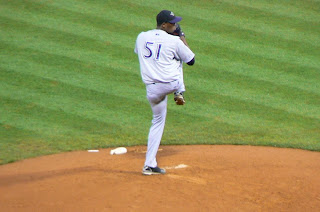 It was 7:00 Saturday night when I saw that Aroldis Chapman was pitching in Pawtucket for the Louisville Bats. It was a 6:00 game, but the start was delayed. I got in the car. Game was in the top of the third. I got there, parked in front of a house we looked at when we were house-hunting around here two years ago, bought my $7 ticket, and went inside in time for the top of the fourth. Plenty of seats available, but I just stayed toward the back at first. Chapman, the Cuban defector* with the $30 million contract, made some guys look foolish, but overall he wasn't too sharp. (While writing this, the Yankee highlights came on, and they showed Yes' coverage of Posada hitting a grand slam complete with Michael Kay screaming as loud as he does when he's in the middle of molesting children, and of course the NECESSARY shot of fucking Jeter doing nothing in the dugout--but they were thwarted as he wasn't in the shot! So they cut to another shot, a close-up of Jeter from a different camera. I'll just never understand it. Any Yankee hits a homer, we MUST see Jeter's face in the dugout. You know what--at this point, I'll make a deal with these people (and that includes visiting teams'--yes, I saw the Orioles' network show Jeter after a homer he wasn't involved in--and national broadcasts who do it too), and that deal is as follows: You can show Jeter on every home run, even if he's sick at home in his jammies. When he retires, you can show his face even then. But you aren't allowed to stop there--when he dies, you STILL have to cut into every Yankee home run trot to show his rotting, un-handsome face. It'll get really fun around the third or fourth year...)

Where was I....oh yeah, that dude. Well, one article I read said he pitched great, another said the PawSox "had his number." He was pretty good, but loaded the bases in the first inning I saw, and then walked in a run and was super-pissed at the ump. Then I moved to the other side and down closer for the next inning. And that was all I saw of him. It had been drizzling the whole time, and finally they brought out the tarp. I decided to stick it out. After a loooong time and no announcements or updates, the grounds crew came lolligagging onto the field. After removing the tarp and leisurely pouring that drying agent and raking it...they put the tarp back on...and walked away. Five minutes later, they told us the game was over. PawSox win 1-0 in 5+ innings.

The delay had gone on for so long, I was getting psyched about getting foul balls, since it was down to me and maybe 100 others. I knew that infield work was gonna take forever at the pace they were going, but I stuck it out since I'd lasted that long. They did give all of us who stayed a free ticket to Monday's game. But I can't go. That's okay, I've got two other Paws games coming up.... 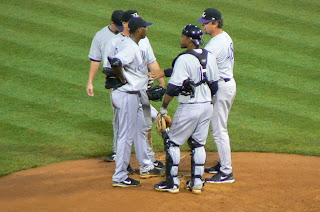 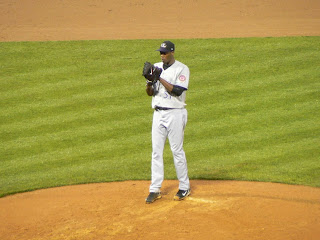 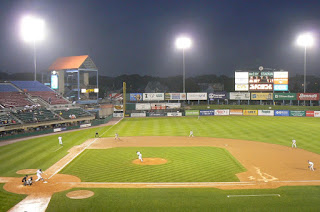 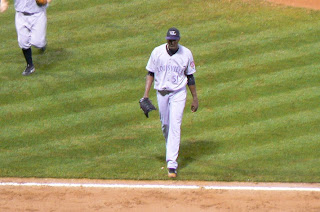 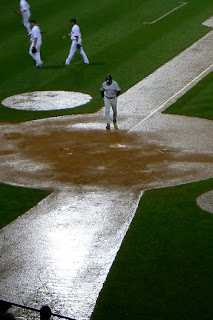 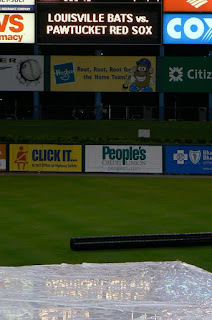 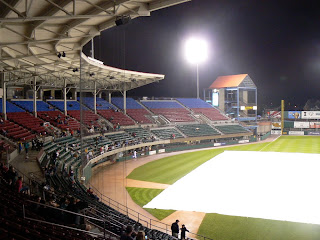 And here's one of Amazing Larry: 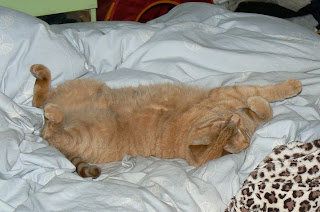 *I've seen where people write "defectee" instead of "defector" a lot lately. Classic case of thinking too hard. If you look up "defectee" on Dictionary.com, they ask if you meant "defecate." Good call!

Comments:
Oh man, the "deal" you are offering the TV networks is pure comedy gold:

But you aren't allowed to stop there--when he dies, you STILL have to cut into every Yankee home run trot to show his rotting, un-handsome face.

Hahahahaha!!! Hopefully I don't suddenly think about this during an important meeting later today, or I'm going to laugh/howl out loud, and it'll be totally inappropriate.

I think it's a fair deal.

I bet they actually would hang his jersey in the dugout, and they really would cut to a shot of it on every home run.

I was just in Louisville. Chapman lived at our hotel. I saw him here and there, got him to sign a ball. You should see his ridiculous Italian sports car.