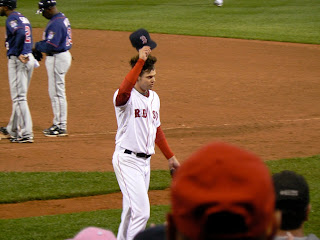 Tonight was the night when Josh Wilker would be signing his new book at Yawkey Way Store, alongside special guest Bill Lee. I already had a single for this game, so I hustled out of work and despite much traffic, parked on Mass. Ave. just after 6 PM. Got to the souvenir shop and fortunately, Josh and Spaceman were still there. 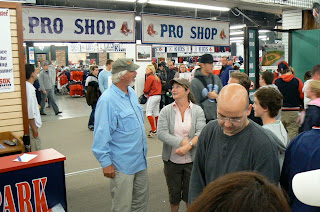 Bill, above, probably "had a few," but he's always like that. They both signed my copy of Cardboard Gods, and since there wasn't a big crowd at that point, I got to chat with both of them, and give Lee a double-sided magnet I made for him out of two of his own baseball cards. He looked at them and said, "my favorite player." This somehow led to him going off about how many chemicals we've put into the atmosphere today alone. Gotta love the Spaceman. Oh, and he looked at my jersey and said, "Newark Bears." I corrected him: Bad News Bears. Ha. He also did a cool favor for me, which is a secret for now.... 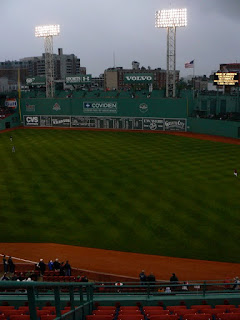 I was completely bundled up for this rainy, cold night, but it turned out being totally fine. I was too warm even. 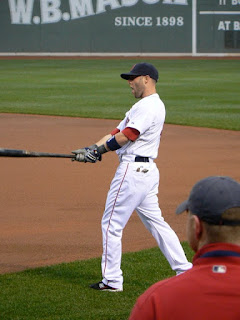 This picture of Pedroia came out much funnier than I thought it would. 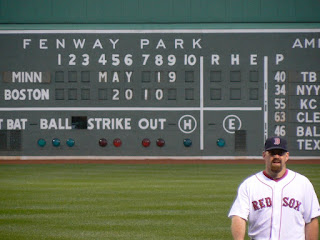 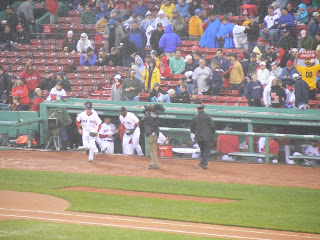 Finally I have settled in at the third base deck standing room area under cover and in the warmth. (My ticket was an upper bleacher, so I paid just 12 bucks for this sweet view. And one quarter for a metered parking spot.) I'd told Josh earlier that maybe I'd see him inside. Well, he ended up walking up the steps of the section I was standing at the back of. So I got to hang out with him and his wife and friends for a good chunk of the game, along with a reporter named James Sullivan who was there doing a story on Josh. Look for that in the Globe soon. Everybody was great, it was fun hanging out and talking proverbial baseball etc. with that crew. 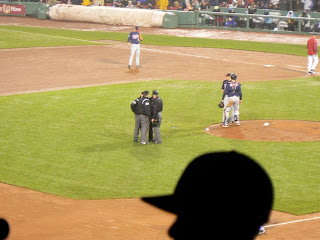 Papi hit what we could tell was a dong, but the umps said no at first. They conferred. (And shadow boy got in the way, but I left it in since it's kinda cool.) And Carl Beane got to say, "the previous play...is under review...."

And here's what happened next:

Yes, another dong for Ortiz. We led 3-1 after 7, with Clay doing great, and I finally said my goodbyes and headed for the box seats. 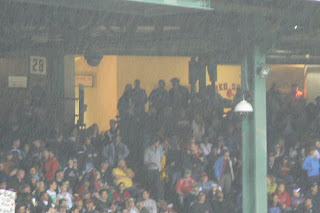 And from down there, I could easily pick out Josh and Co. where I'd just been. They are the shadowy figures standing at the top-middle on the yellow-ish background are them. Left to right, Josh's wife, Josh, his friend, his friend. 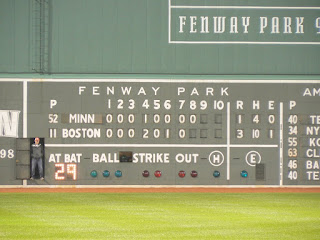 Dude in the scoreboard doorway. 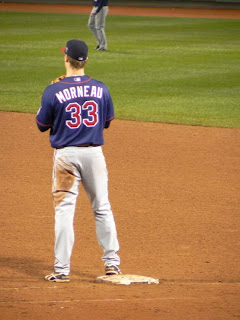 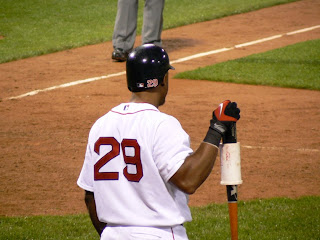 Adrian Beltre, as seen from not 500 feet away. 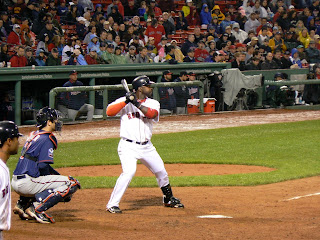 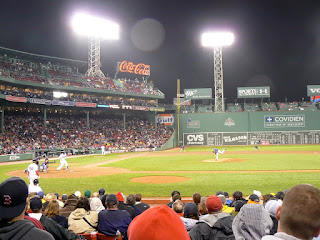 In the good seats at spitty Fenway. 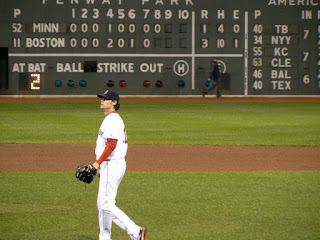 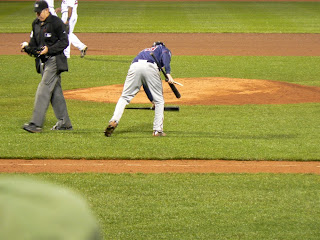 To add to my "broken bat" collection.... 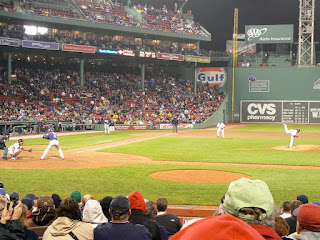 A picture was taken of me and Josh, but it wasn't with my camera, which is why he doesn't actually appear (clearly) on this Wilkerific post. But remember to check his site often (you can read old posts while he's on this book tour for a few more days).