Sox Vs. Royals Memorial Day (Observed) (Since It's An Off-Day Tomorrow) Gallery 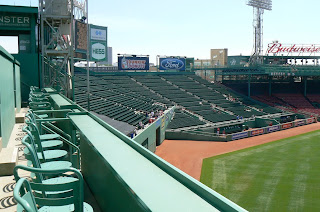 I got up there during the RSN half-hour, and there was no Sox BP. 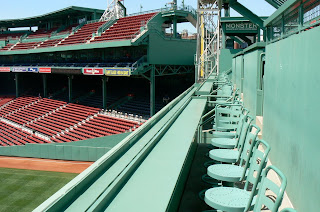 But the guy up on the Monster said "it's not busy now but it will be so grab a spot now." I guess "busy" is Monster staff lingo for batting practice. 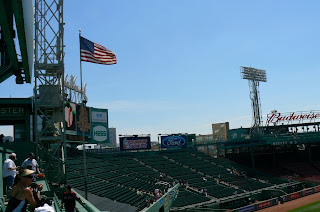 Knowing I'd have those few moments where I was already up there, the rest of RSN was kicked off, and the gates were barely open, I brought my glove in hopes of getting my 16th lifetime ball. 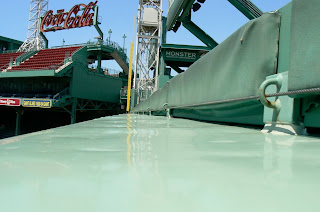 I've pretty much taken these exact shots before, but....enjoy, again! 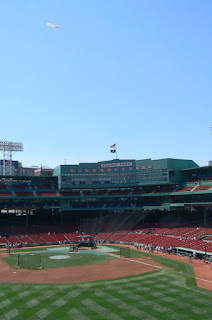 Seeing the L-screen set up confirmed KC would be hitting. It was a horrible wait, knowing that more and more people were entering the Monster Seats, as the gates were now open. 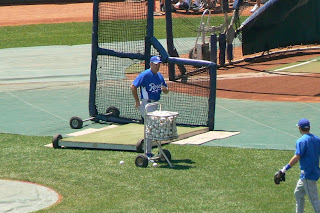 Finally, they brought out their balls. BP started, and all the righty Royals were hitting to the opposite field. You see, this is why they're the best hitting team! They're not up there just trying to hit it over the big wall, they're actually practicing fundamentals. Eventually, though, they pulled a few. Still, only a few came our way, and I don't think any cleared the seats. One was just to my left. A screaming line drive. I held my glove out, and before my mind could process the thought of moving one more step over, the ball was ricocheting back to the row below me. That was my one chance. Had it hit the little wall and gone down into my row, it was all mine as that row was empty. Oh well. Also, once again, the person down at the RSN entrance told a family that there'd be no batting practice, again saying how the team likes to sleep in. If they're just talking about the Red Sox, fine, but why not point out that the other team will might be hitting? I've heard them say this to people three times now--I really think they're trying to keep people out early for some reason. 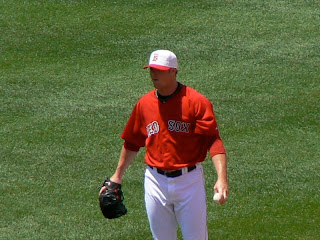 During "the lull," I went all the way around the park, and got this shot of Lester with the crazy white cap on. Then I was under the bleachers when I did that mobile blog entry on my iDouche. It seems I can get the FenWifi, but only at ground level. 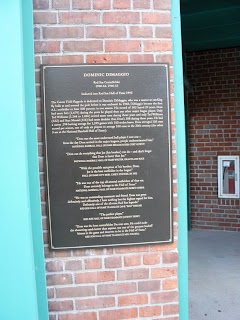 Up near the Monster Seats, a Dom DiMaggio plaque. It's funny how there are plaques and signifiers for things that I saw right when they became public before a plaque was made. So now I'm rediscoevring, and finally getting the scoop on, that stuff. 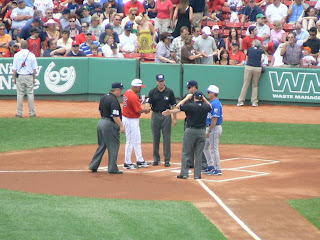 Okay so I saw an empty seat in the front row and grabbed it. I'm right next to the left tower. Find Kelly O'Connor in this pic! (Once again, I had no idea she was in the pic or even at the game until I got home and looked at these.) I got on TV on Scutaro's double to lead off the first. But these far away shots aren't really worth posting, now that I've been on in that close-up, behind-the-hitter spot. 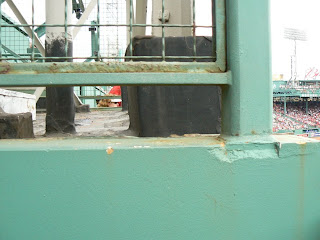 Looking through the tower. 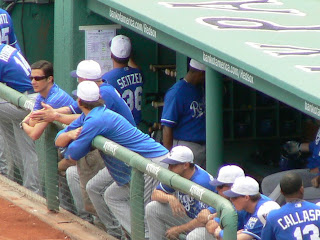 Was just taking a shot of the KC hats--didn't even know I was getting a pic of "my day" favorite, Kevin Seitzer! Does he still do that shoulder-jersey-pull-forward thing? 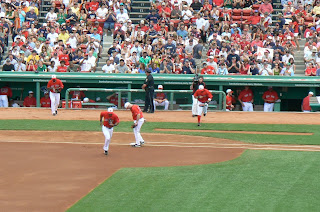 Here we come with the white hats. 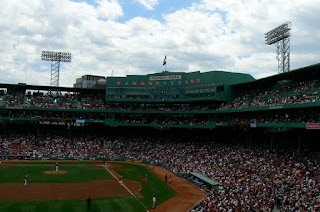 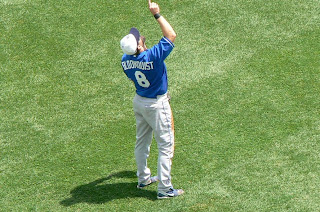 Bloomquist asks for god's or jesus's or a dead relative's assistance. It was denied in the 8-1 loss. 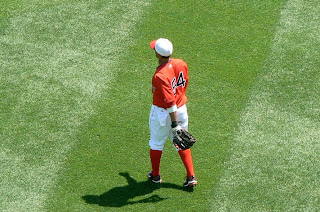 Had a nice view of Darnell. In the second, I was kicked out of that spot. I was okay with just standing in back, but I decided to go down to Row 1 and check the long row between the two light towers. There I saw four empty seats. Eventually two dudes showed up next to me, but I kept my seat, and had an empty one next to me, ALL game. This happens almost every time I'm up there. Don't pay the $165 (or way more on shit-sites), just get the $35 and take a seat, you should get lucky. I like to think that the seats I grabbed were ones put up by some greedy bastard on ShitStainHub for like a thousand bucks, and no one bought them, and he had to eat 'em. 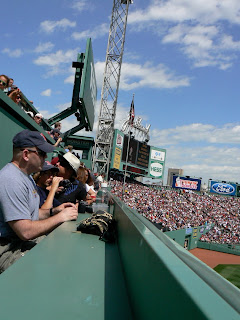 And when I looked to my left from my new spot, who did I see? Guy Fieri! From that show "Restaurants with Weird Stuff on the Walls" or whatever. You see him in the hat there? The first time someone called attention to him by asking for an autograph, I thought he was Kevin Millar. He also had his son with him, who had a camera the size of his head. 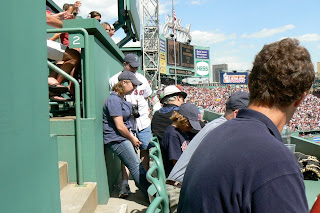 Here he is signing for this couple. See the bleached hair under the hat? I guess these aren't the best pics of him, so you'll just have to believe me. 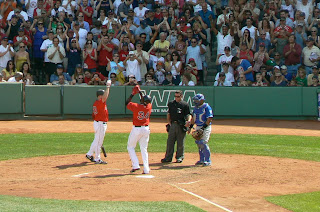 Papi hit a dong to dead center, and what had been a close game soon became somewhat of a blowout. 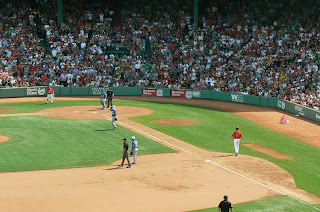 With Cameron up, a balloon hat came out of the 3rd base pavilion. It was crazy windy, though we were shielded from it in the Monster Seats and just baked all day. SO this thing came shooting out and looked like it would land on the infield, a la that "Go Red Sox" banner on balloons from the '86 Series (later ripped off, albeit outdone, by the Shea parachutist). The shadow passed right in front of the batter--but Cameron hit a double right then, and at that moment, the balloons got caught up in the swirling wind and went right back toward the visitors' batter's box and landed. It then blew to the fence where a fan snatched it. I checked on mlb.tv, and was glad to see Don and Rem were joking about it. In the pic above, the thing itself. 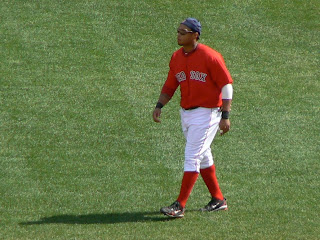 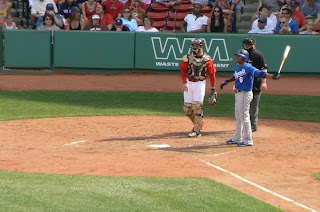 And Tek in his nutty camo gear. I bet Bill Lee would have worn Camus gear. Sox win 8-1 and summer has begun. Hey, I'm a poet and I'm unaware of that particular fact.

Comments:
Then I was under the bleachers when I did that mobile blog entry on my iDouche.

The "iDouche"... hahahahahahahaa!! Thanks for a great Monday morning laugh.

Those white hats were atrocious. I never want to see them again.

You're welcome, re: said laugh.

Re: the hats: yes, real dumb. Every year they come up with a different and somehow worse way to put stars and stripes into everything. The only good aesthetic thing to come out of it was when the Yanks were forced to wear red hats.

Jerry said (about the balloon hat) that he was afraid aliens were invading Fenway Park and were going to take Don away ... for experiments.

(Admission: I would never buy or wear one, but the stars and stripes B on the regular blue cap looks nice.)

Oh and the Royals guys--the thing was visible in shadow and when you saw the ball going out to left, just like on NESN, but they said nothing, even when they were cued by the fact that they cut to a shot of the fan pulling it into the crowd after the play. They just said nothing.