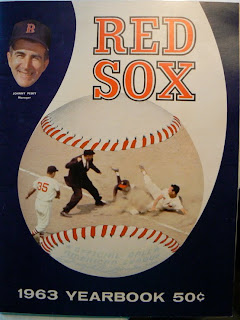 I never knew my parents had a 1963 yearbook until I found it in a box of stuff they just gave me. So here it is....click each to enlarge. 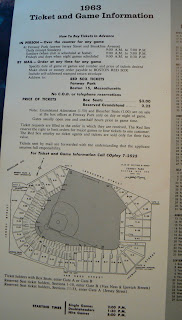 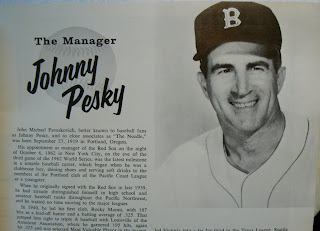 The big deal at the time was the new manager for '63, the immensely popular Johnny Pesky. (He would be let go toward the end of '64 after two sub-.500 seasons.) 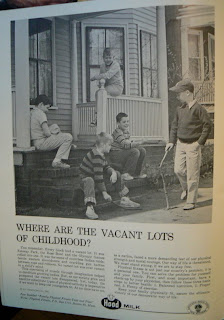 Wow, in '63 they were already lamenting the loss of the stickball-in-vacant-lot era. There weren't a lot of ads in the yearbook back then. Not a lot of color, either. (In more ways than one.) 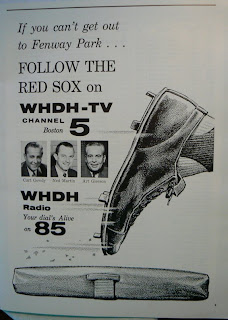 Catch the Sox on HDH, TV and radio. 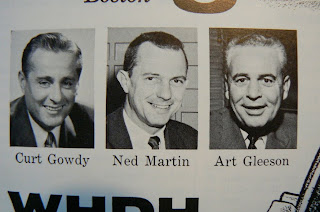 Close-up of Gowdy and a young Ned Martin from above ad. 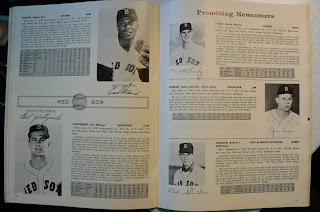 The layout of the player pages. Yaz at bottom left. 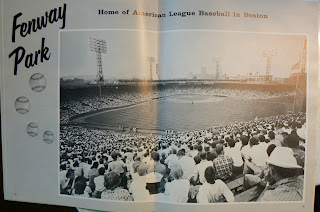 I love this shot. From Opening Day 1962. [Correction: It's from the 1961 All-Star Game (the Fenway one, anyway); see comments below. Thanks to reader RomanMejias!] It's always weird to see the way the roof used to look before they built up. It's rare to see a close-up of the old wooden benches in the upper bleachers, but you can see them at bottom right. You can also see the bare concrete on the bullpen wall. 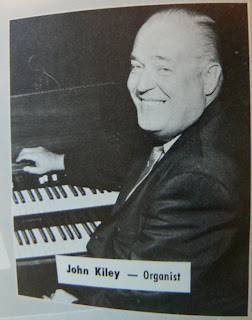 John Kiley, who is usually heard not seen. 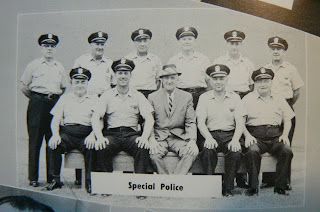 I think "special" means "should have retired 15 years ago." 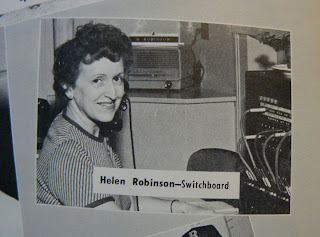 Helen! In my review of The Ballpark from 15 years after this picture was taken, I showed a picture of her and wondered if she'd been wearing the same glasses for 35 years. Guess not! She looked more 50s in the late-70s than she did in '63! Here's the '79-ish shot: 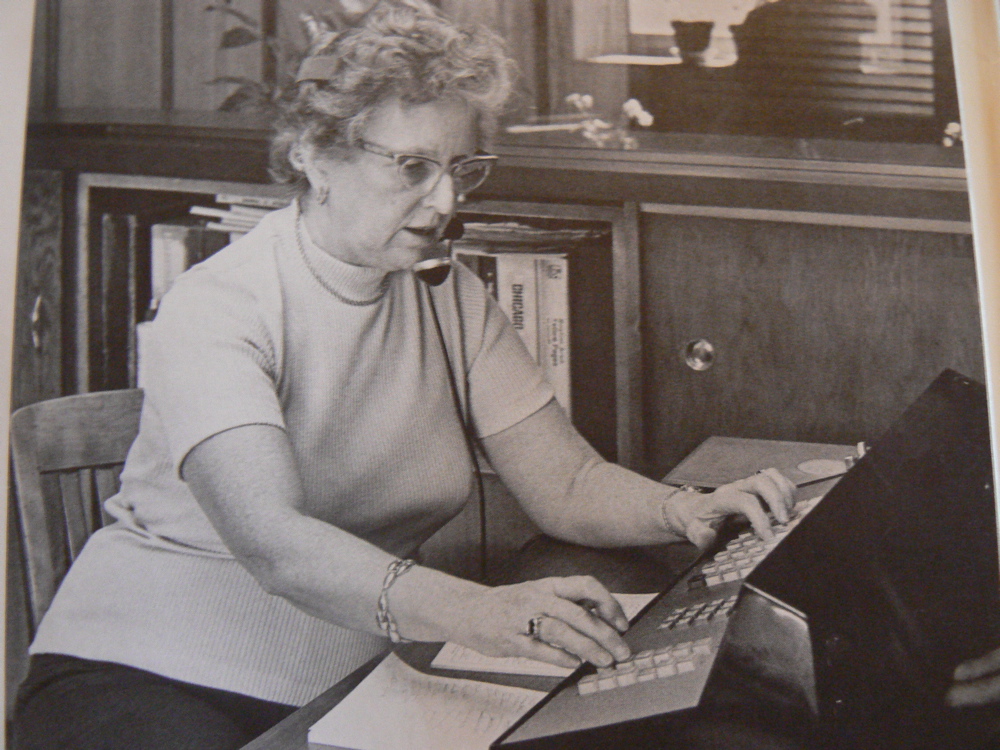 Good to see they got Helen some nice, modern equipment.... 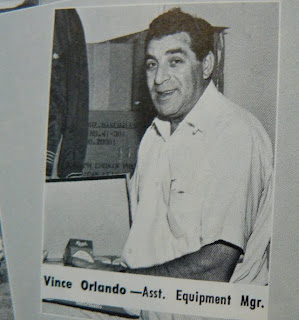 And surely you remember Vinnie Orlando from this post. 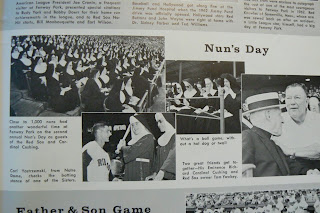 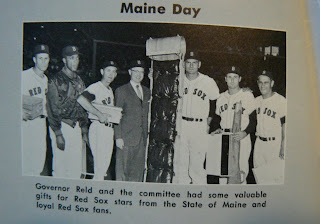 They showed pics of all the state days. Maine gave the team a tobba--, a tobog--, a big sled. 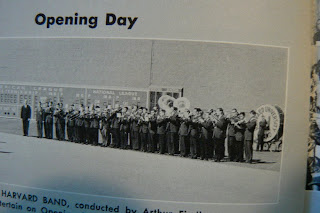 Showing that the electronic part of the scoreboard which showed the lineups (which was removed before the '76 season) was there in '62. 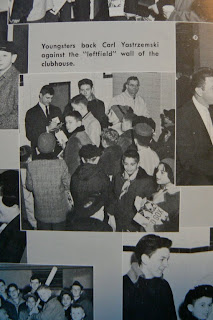 They used to let the season ticket holders meet all the players. Here's Yaz surrounded. 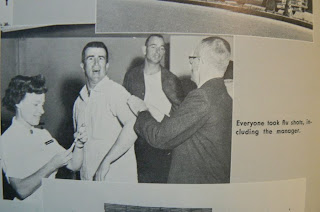 Nice reaction to getting a flu shot by Pesky. 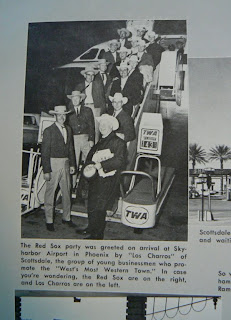 Scottsdale made a huge deal when the Sox would come to town. There's a whole section on the spring training festivities, plus pics of the players with their families. 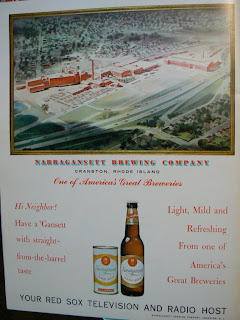 If I drank, maybe I'd drink this Rhode Island fave. That's your back cover.


Bonus pix! Finally, a shot of me at Army Baseball Camp, along with the late Robin Roberts. 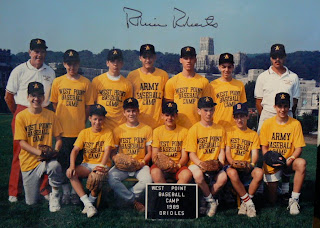 And, a classic. As you know I was every bit of a die-hard Jets fan growing up as I was a Sox fan, until I finally just gave up on non-baseball sports a few years ago. Well, this one time, my family was on vacation in San Juan, Puerto Rico, and who do we spot, but the then-coach of the Jets, Joe Walton. So there I was, by chance wearing one of my Jets shirts at the time, face to face with the head coach. They took my pic with the extremely hairy Walton, who seemed pretty happy about the whole thing. (This was before the "Joe Must Go" chants started, I think.) A year or so later, my mom had the pic blown up, and it was on the wall at our old house for many years, and later decorated with little pictures of Joe Namath, Bill Parcells, and Ed Anzolone--you can see the back of the Parcells head folded up on the left. So here's a pic of the giant pic: 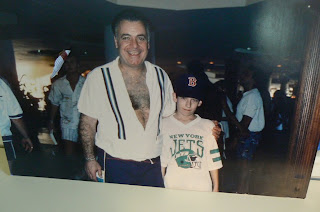 I'll be back after midnight or tomorrow, probably with some pictures of pink bats.

Comments:
It's a bit strange to say it, and I may only feel this way because I'm of the post-built-up era, but it seems to me like building the behind the plate media area is one of the rare instances that actually made an old place like Fenway more unique and attractive rather than less. The old pictures with nothing but the low roof just look so boring to me.

And as a RI-er and 'Gansett drinker, I was thrilled to see that they now sell it Fenway again! It's local, it's cheap, and it's soooooo much better than those generic, sexist-commercial making, not-even-American-anymore beers like bud. Here's hoping they kick those to the curb.

They've done a fine job with that whole above-roof area, so that it looks like it's always been there without being just a standard "upper deck."

I'm with Ryan; I loved Fenway when I was a kid, but I think it actually looks much more interesting overall now.

That '63 yearbook is great, particularly the Pesky flu shot. I guess Nuns Day just kinda petered out over time. I'm gonna guess that hanging out with the season tix holders really wasn't one of Yaz's favorite things to do, unless he was able to bum a smoke or two off of them.

As for that Joe Walton pic, you look really frightened of his chest hair. As well you should have been.

Also, Joanna Newsom rips on both Lady Gaga and Madonna; I'm sure this one's right up your alley:
http://nymag.com/daily/entertainment/2010/05/joanna_newsom_lady_gaga_not_as.html

1. "I love this shot" was not implying I don't like the current roof situation. It's just great to see it looking toward home instead of from home, in panoramic style.

3. Nice job by Newsom. (I only haven't mentioned Lady Gaga on my blog because I'm practicing the "just don't look" theory which made the abominations disappear in that Simpsons episode.)

You should have applied that theory to Joe Walton's chest hair!


jfAJM--so you said you won't be going to Fenway for a while, what's going on? Also, Kim says her dye- & fragrance-free soaps are good for babies in general. Just cut 'em in half if they're too big....

wait. I may know the answer. if so i set you up beautifully.

jfJere: Ha! Yep, I was playing coy with those comments from a while back, but 1 + 1 does = 2 here. We'll be welcoming two new members into Sox Nation in about a month; maybe sooner. I've already bought Sox gear for both of them. Now I just need to confirm that Dwight Evans and Fred Lynn will be available to perform the Citizenship Ceremony right there in the delivery room...

That was really funny how I thought of those two comments and it didn't hit me until writing out both answers next to each other...

Thanks Jere; I actually did get some of their Sox gear at Twins (or YawkeyWayStore these days). That place is way too expensive, but they occasionally have 30% off sales online.

And they're going to keep me from traveling to Boston (or anywhere else) for a while, but they should leave me with more time to comment. Lucky you! I just have to learn to type one-handed while holding a bottle with the other.

The photo from the CF bleachers is the '61 All Star game. Note the two different uniforms in the visitors bullpen. Also, with a very fine eye you can detect very little on the LF scoreboard, meaning there is only one game happening that day. Note also that the lights are on. The game was rained out in the 9th inning.

You're exactly right. I always forget about that '61 ASG.... My thought process was: recent game, with buntings and a full house: must be Opening Day the year before since the Sox hadn't been to the postseason since '46. However, now that I look at the attendance for '62 OD, it was only 14,000, and, duh, everyone wouldn't be in short sleeves in April! The ASG obviously had a full house, and you can even tell that's Willie Mays in CF. Nice job by you, bad job by me.

Another giveaway is the LF and RF umps.

Absolutely on the umps and Say Hey. And a very un Yaz-like positioning of Cepeda in left. How much deeper can he go? No natural outfielder he. Aaron in right. I wonder what right handed slugger is up? The lights were turned on at the end of the 6th. No runners on in the pic, so that leaves the 7th or 8th. The rain started right before Colavito's AB in the 8th (thank you Retrosheet!) but I don't see the fans scurrying for protection. So that leaves possibly Brooks Robinson in the 7th, or, would Cepeda play that deep for Luis Aparicio or Johnny Temple? We may never know!

Wow, that is key that we know when the lights went on. I just checked news stories from '61 and they say the lights were turned on "at the start of the 7th." Then they say that as the bottom of the ninth started, the rain came down harder and harder, and that it had actually started in the 8th inning. This tells me we have to be looking at bottom 7. (Looking verrrrry closely I can see the inning number on the scoreboard up behind the first-base side of home and it looks like a backwards C, so that's probably a 7.) (Scoreboard visible on Getty Images pic of starting lineups.) I also see nothing in the outs column--that plus the fact that this has a "start of an inning" feel tells me it's Aparicio up to start the bottom of the 7th. (Also, it would be Altman in right at that point.) What do you think?

Eagle eye! If you can see that well then I'm sure you nailed it. I've got the yearbook and can't come close to seeing the details on the 1st base scoreboard. Altman, yes. Hardly even remember him. Time to work on the bullpen! In the visitors' it looks like the ice cream cap of the Reds and the black sleeves of the Pirates so I'll go with Joey Jay (Purkey started) and Elroy Face (at 5-8 he can barely see over the fence). I'll let you sort out the AL pen.

Scoreboard aside, I just think it's the start of an inning. On deck guy is already there, no player is out of position as if a play was just made, ump cleaning plate.

I'll get back to you on that 'pen.