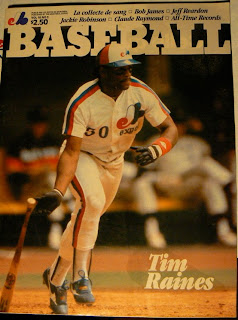 The Expos are cool. Let's have a look at one of their 26-year old publications. (Note: I picked this up at a flea market a few years ago; I never attended an Expos home game and I've never been to Montreal.) On the cover, Tim Raines, before he officially became "Rock." 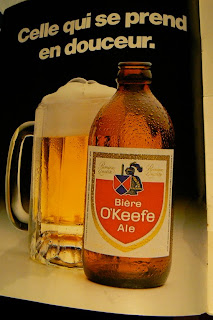 When you need a break from that Georgia heat.... 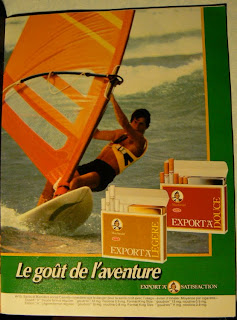 Smokers in the 80s liked their water sports, I've noticed. 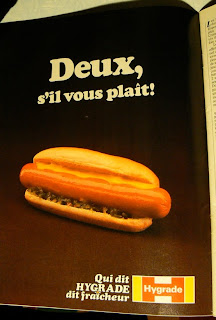 Shouldn't there be deux hot dogs in this picture? 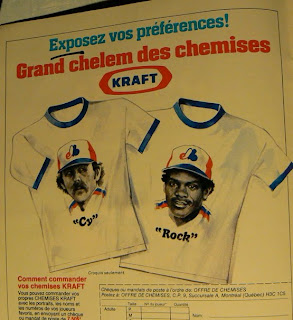 In '84, in Montreal, Tim was already Rock. And shouldn't you have to, at the very least, win a Cy Young award before you get called "Cy"? 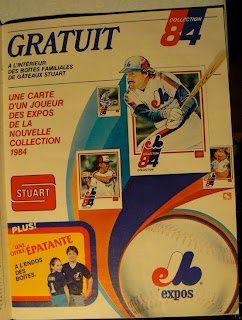 Looks like some kind of card set. Collect them all...at Stuart? 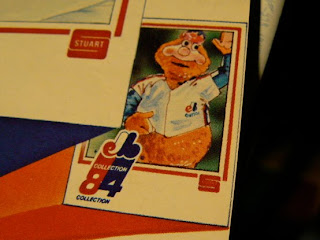 A closer look at Youppi from the same ad.

What was the deal with that little dagger in the Expos logo? It only appeared sometimes. I feel like I once knew the answer to this. 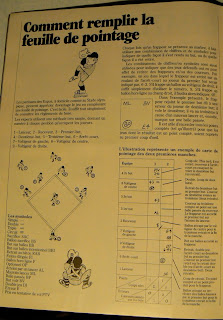 Sure, you know how to score a game. But can you do it in French? 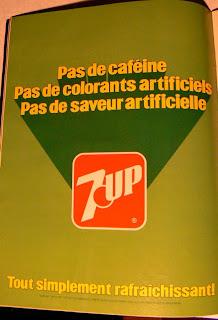 What is it that fascinates me about seeing something that's usually in English in another language? Regardless, I really like that green.... 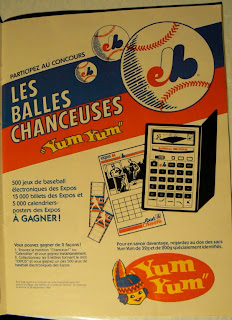 Anybody know what's going on here? 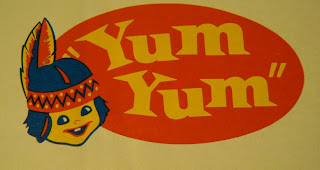 A closer look at the lil' Yum Yum stereotype girl. If anybody has info as to whether any of these Canadian companies exists today, please share. 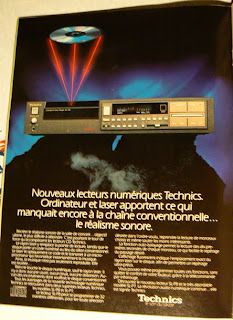 A CD player ad from way before I heard of CDs. 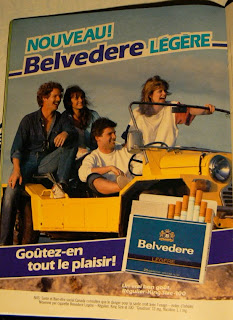 I really hope this vehicle is not in motion. 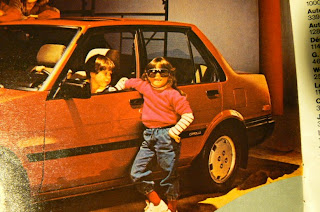 My favorite person in the whole magazine. (I also hope this vehicle is not in motion.) 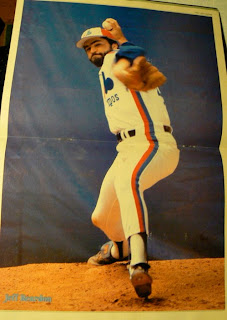 When you woke up today, did you think you'd ever see a Jeff Reardon centerfold? "My love runs cold, my jewelry store has just been stole'd"? 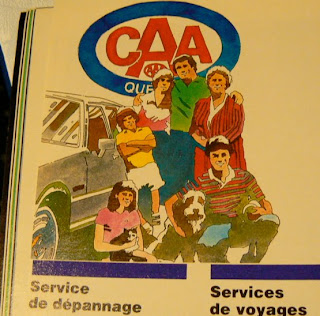 Wow, the Canadian version of Triple-A. (Kinda like the Expos, zinnnnng!) 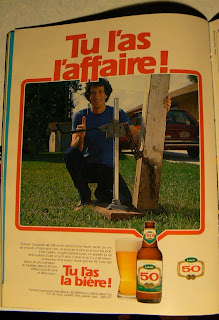 I don't know what this guy's going, but I have a feeling a talking dog told him to do it. 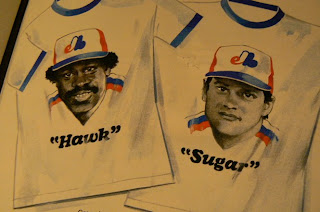 More nickname shirts. I'll give two Red Sox tickets to the first person to send me one of these shirts. Wait, cancel that--I just found one on ebay. Cy! ($50!) 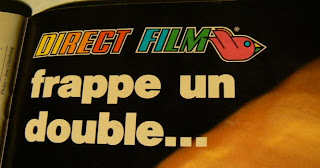 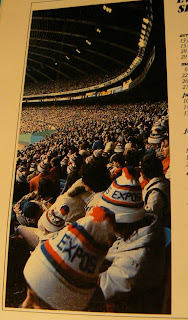 It's colllld at the Expos game! 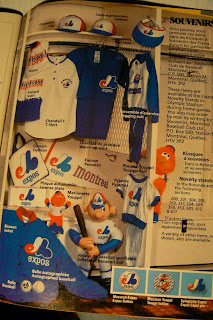 All the ELB merch you can imagine. Including a blow-up doll. 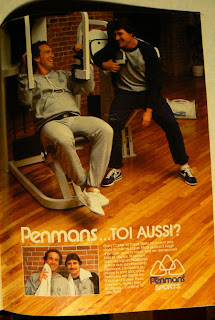 Cross-country rivals Gary Carter and Dave Steib working out together. Canadian mustache pride! (Gary's 'stache is gone here, but appears on the page with the baseball cards above.)

Comments:
a break from that Georgia heat

So do you see any of these companies up there? I wanna buy the film I no longer buy at Direct Film!

So I might as well comment on a couple more really old posts. I went to two Expos games in Montreal; once in 1986 with my parents, and once in 1994 with a bunch of guys on a bachelor party road trip. It really was an incredibly dreary environment to watch baseball, even after they tried to spruce the place up a bit in the 90's. Of all the ballparks I've been to, only the Kingdome came close.

Which was a huge shame, because Montreal is a fantastic city, and I think the team would still be there today (even despite the '94 strike that everyone blames for killing baseball in Montreal) if they had played in a nice outdoor stadium closer to downtown.

Mocking something because it's doesn't look american or because you don't understand is low and cheap. It's showing a bad attitude and a behavior that is not acceptable unless you are 15 years old. What killed baseball in Montreal is all the lies and bullshit that owner like Jeffrey Loria and the owners before him shown. Trading all the talented player when they were at the end of their first contract sure didn't help. The 1994 season didn't help also but what really didn't help that year was that, the roster of that team agreed together to salary's so that the payroll for the following year would not be that high. They came with a payroll of 40 000 000$ with the same team and all the talented players in it. The owners still traded away all the talent but the fans stayed with the team until, they had enough, 6 years later and then, when Jeffrey Loria fired Felipe Alou as Coach of the team, it became too much. It was too much for me to. I love baseball. My favorite team are the Yankees now. I like the Blue Jays and hate the Red Sox because they play in Boston and I hate anything that comes out of Boston and the New England area. They think that they are so perfect over there. The truth is that they are so dumb that most people in their university aren't even from Boston and those who graduate, aren't from Boston and they leave as soon as they can because there is no future there. Only irish drunk who thinks that they build everything in North America live there. They did not do anything, they were too busy beating their wives and getting drunk. Go Eds Rox Go! - Frederick Desjardins

Mocking something because ... you don't understand is low and cheap.

"But that's what I'm going to do at the end of my long comment. Maybe no one will notice."

Also, I love that he believes Red Sox fans think they are "so perfect". God, we trash our team and players even when they are winning the World Series!

Also, also, have a little respect for your own opinions and read over what you typed before you post it. ("salary's") ?!!?

Well this is just bizarre. Here I write a glowing tribute to the Expos, complete with remarks about how I like things that aren't in English and noting how a company uses a sterotype of Native Americans/Canadians, and I'm accused of mocking the Expos and being a xenophobe. By someone who goes on to mock Irish people and Boston and its college graduates even though I'm not from there. Sounds like the comment of a person who CHOSE to be a Yankee fan.