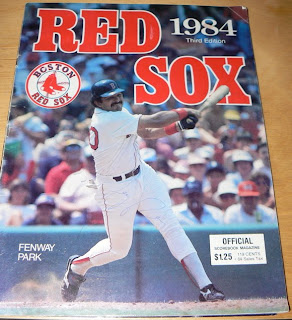 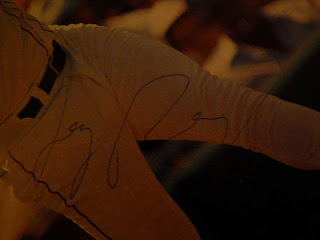 If you look closely at Tony's legs you'll see an autograph. We were walking underneath the stands, and my dad spotted injured second baseman Jerry Remy in his street clothes. He was happy to sign for two other Jeres. Remy probably didn't know it that day, but he'd already played his last major league game. But he also didn't know that 25 years later, he'd be as famous as any of his teammates. 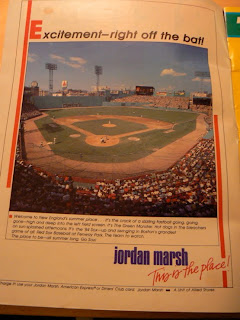 On the inside cover there's a Jordan Marsh ad. I looked (very) closely to try and figure out which game it was. And I got it--June 21st, 1980. Top of the fifth, Rod Carew leading off for the Angels, a 1-0 count, and the Angels up 3-2. They'd hold on for a 4-2 victory. (The night before they beat us 20-2, with each Angel getting at least 2 hits.) Minutes before this pic was taken, Jim Rice's wrist was fractured as he was hit by a pitch. He played the rest of the game but missed the next month of action. 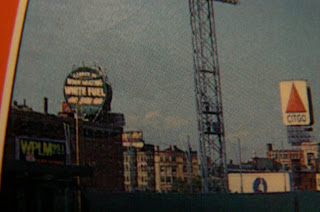 I knew it had to be an older pic because look, the sign I knew as the Miller Lite sign was a White Fuel sign. Go Sox Go! 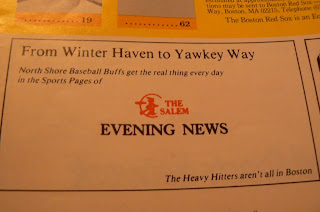 Cool logo by one of the many companies to use minimalist advertising here. 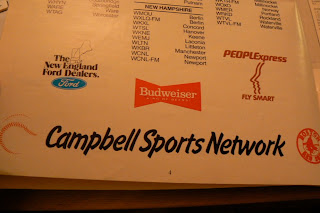 When I'd listen to games on radio in the 80s, Ken or Joe would always remind me I was listening on "Campbell Sports Network." Also, dig the People Express logo. 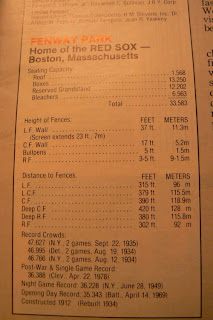 I liked when they used to tell you exactly how many seats were in each section. And if you've forgotten your meter distances, which used to be in yellow on the fences, here's a handy reference guide. 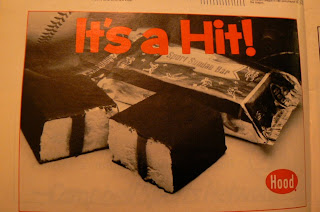 I don't know if kids today can appreciate what the "Sports Bar" meant in the 80s. At a game, you got a hot dog, or a pretzel, and a soda. And then there was the one "special treat," this block of ice cream vendors would come around with. In the grocery store, it might have been my last choice. At Fenway, it was the only choice. 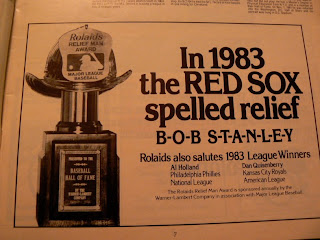 Back in the days when we used to call closers Firemen. 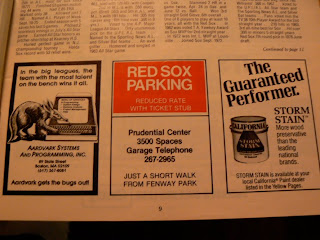 A few ads--you can still get discounted parking at the Pru garage today. 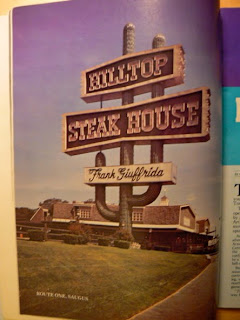 Kim had a huge reaction to this crazy cactus place so I'm sure the rest of you Mass people will, too. 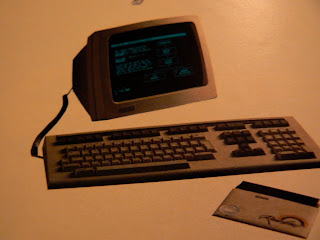 Computer ads were all over the place in '84. Wave of the future, I tells ya. Earl Weaver baseball! 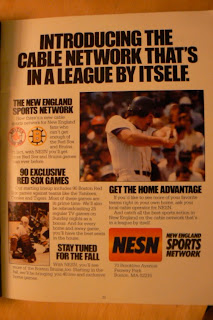 An ad for NESN in its first year in existence. I've always complained about how channel 30 only would pick up, for the most part, the Friday/Sunday TV38 games. But now that I realize just how few games were on 38 from 1984 on, I guess 30 was just doing what it could for us down in CT without cable at all, let alone NESN. 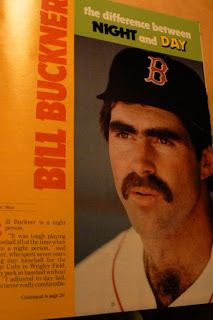 Huge story on recent acquisition Bill Buckner, and how he didn't like being on the Cubs because he was a night person. There's a line in there about how he hates losing at anything, even at cards to his wife. Makes it even more sad--I mean, ths guy who hates to lose had this long, great career and...you know. Also a line in there from Lou Gorman saying how Bill really made the infield better defensively. 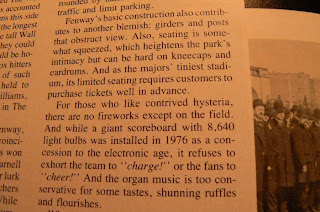 You know I love this--mention of how Fenway has never needed to use prompts to get the crowd to cheer like Yankee Stadium does. Still none of that garbage at Fenway 25 years later, either. 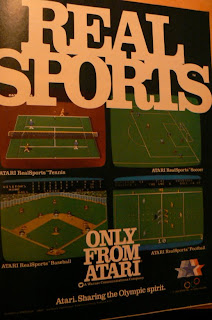 As real as it got n 1984. And you know what? I still like it that way. It really doesn't matter to me if the players in a video game are "real-looking" or just dots. Besides, all these modern games, the players always look like they're going too slow, they're all herky-jerky and unnatural...it's about time these video game makers gave up on trying to make it look real. If they haven't mastered it by now.... 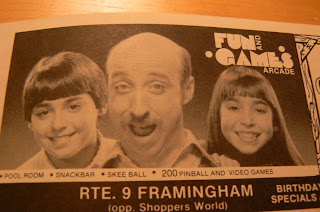 Dad is psyched about this arcade. Or maybe he hangs out in that "pool room" while the kids are busy battling the Gorfian empire. (Or defending it, whatever you were supposed to do in that game that wouldn't shut up.) 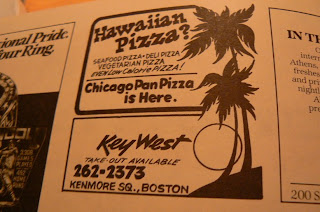 Anyone have any memories of this place? 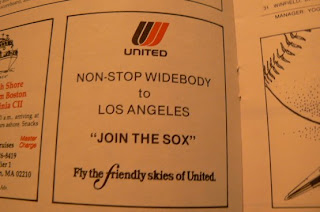 Advertising following the Sox to the west coast, I love it. 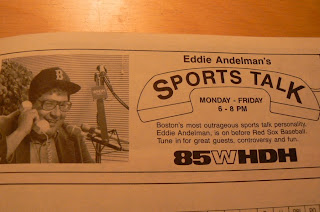 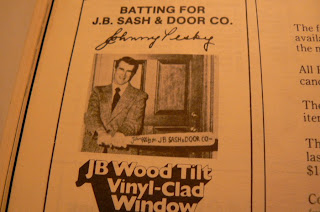 Johnny Pesky, windowing it up. 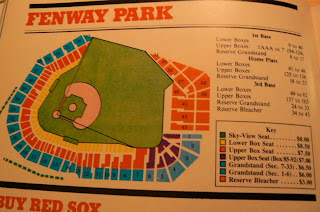 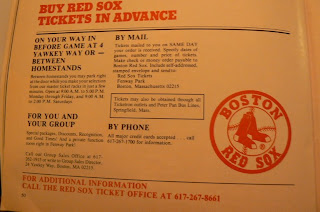 Check out the ticket prices....and all your other ticketing info, '84-style. 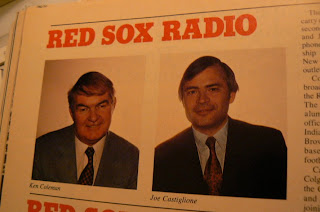 The duo that sang me to sleep so many nights, Ken Coleman and Joe Castiglione. This was Castig's second year in Boston. And he's still going strong in 2010. 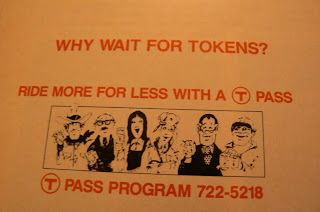 Check out this crew and its T passes. 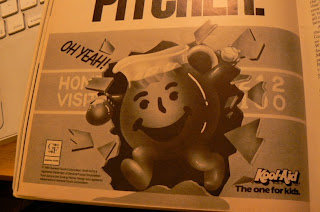 Kool-Aid man, with baseball, because, you know, we baseball fans don't understand what the hell you're talking about unless you put a bat or ball in your spokesperson's hand or tell us that your fireplace tongs are a "home run." I'm glad Kool-Aid man has burst through this scoreboard, because the idiot running it put the home team on top. So basically the folks at General Foods know this about baseball: it uses a ball. 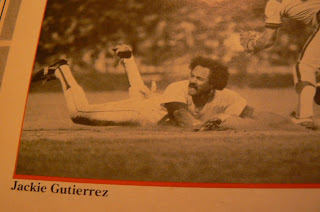 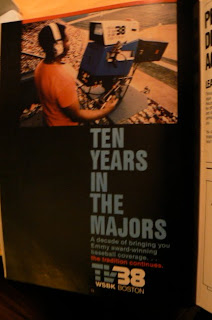 Also surprising to me--that 38 had only been doing games for 10 years at this point. 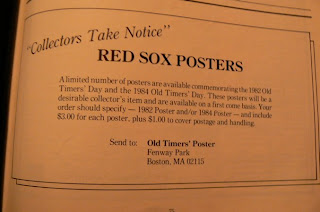 Sorry I don't have a better closer (fireman) for you, but please, collectors, consider yourself on notice.

Comments:
Jere, I HAVE this exact year book! I'm looking at it right now. It's a little frayed, a little yellowish but still classic. Because of you, I dug it up out of my "Sox pile." Thanks.

I'm wondering where the Fun and Games arcade across from Shopper's World was - was it where Newbury Comics is near Joan and Ed's Deli?

Mmmmmm Joan and Ed's - I'm getting hungry just thinking about that awesome place.

I can't help you there. They had a lot of games and stuff, though, it must have been huge.

Peter, you're welcome. Enjoy the articles. There are some good ones!

Is it sad that I also have a copy? How many fools hung onto that thing anyway?

I've never thrown away anything.

And the Internet is reaping all the benefits! mwahahahaha

The Hood sports bar was AWESOME! I still have found memories of eating them while watching games at Fenway. Do they still exist?

I hope so but I don't know! Hey Spats Bahz!

Right next to Legal Seafood, next door to Big Papi's Grille, I think. Whenever I go to Big Papi's, I've parked in front of some arcade-type place, which I only noticed because it looks so deserted and un-fun - or maybe the outside is just stuck in 1984? Now I'm gonna have to look closer next time.

You're saying FaG is still there????

Actually, yeah, I just googled it, and that's the place I was thinking of. (And they close at 8, being a kids' place, so that's probably why it's always looked so deserted when I've gone by there on my way to dinner.)

Hey Jere. I used to have the same yearbook too - in fact it's probably in my attic somewhere. The very first visit I made to Fenway park was on August 25th, 1984, with my mom and my two brothers. The Sox beat Cleveland 11-6.

Two t'ings:
1) I remember Jackie Gutierrez's huge hair. There used to be a clip of him, played over and over on TV, where he doubled to left and had to dive into second base (safely). The helmet popped off and the hair exploded.

2) Atari Real Sports (or was it RealSports?) Baseball. Now there was an awesome game. When the machine (via the TV) emitted a high-pitched, ear-damaging screech, it meant the ball was in the air, and you'd better catch it because if you missed, it would carry over the fence (no matter how poorly hit) and was a home run. Better still, this game allowed you to "phase" the batter. All you needed was a runner or two on base who would take off with the pitch, then hit the ball on the ground. When the lead runners reached their bases, the batter would disappear from wherever he was on the first base line and pop instantly onto first base. My brothers and I used to drive each other insane with this stunt, because it meant runners who should have been out were safe. On the other hand, a ground ball fielded by the third baseman, fired to first but missed by the first baseman, could carom off the wall behind first and still be picked up in time by the first baseman to retire the batter.

I had different sports games for Atari. Baseball: "Home Run". The defense was three ETs who moved in lockstep. If they got the ball, they could sprint all the way across the field and "erase" you before you reached first. You had to hope for balls in the gap. A ball hit to straightaway center would disappear for a HR. I think you could play with one or 2 defenders by using Game Select.

For football, I played Super Challenge Football. The field went left-right, Tecmo-style unlike your 10-Yard Fight or your John Elway. The players were small relative to the field, so it was more than one step per yard, making the field feel like it was a mile long. This made for more competitive play later in life when we broke the Atari back out. And the clock was slow, too.

Soccer: Pele's Soccer, which we called "Please Play Soccer," because we didn't know this strange Pele word meant. The players were just ovals, but it was still fun.

I pretty much only saw Jackie G. on his baseball card with hat on....