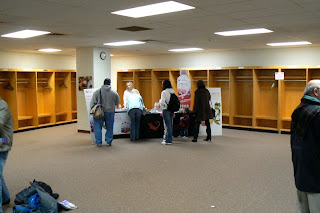 Went to the Pawtucket Hot Stove Party at McCoy on Saturday with Kim. My goals were to see the clubhouse and get Natale's autograph, and I met them. But between getting there late and spending most of my time on line, that's about all I did. Above, the clubhouse. 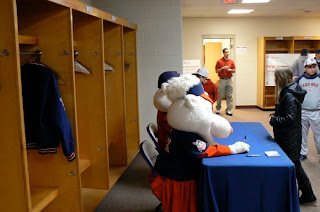 The mascots in the clubhouse. 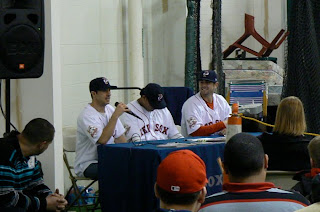 Natale, Doubront, and Kelly were in the weight room, taking questions from an audience. The guy told me they'd sign when they were done, so I waited in there, knowing this would be the only player room I'd have time to go to. Natale is on the mic. 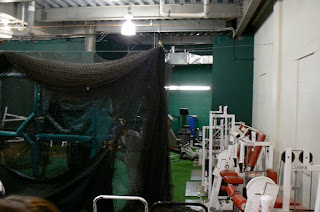 While waiting in line, some dude said these guys had to catch a flight and that we had ten minutes left. As it turns out I was about nine minutes from the front when he said that. While I waited, I got shots of the Astroturfed weight room... 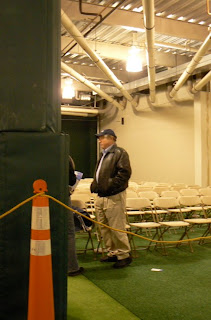 ...and explained to the guys behind me who Jeremy Kapstein was. I've met the Kap'n a few times now, and this time he recognized me! Had another friendly chat with the man. How far we've come from the days of admiring/worshipping/obsessing over him as "that guy behind the plate." (Cue AJM comment about Fisk and Lynn.) 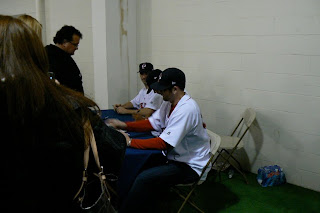 Left to right in these shots, it's Jeff Natale, Felix Doubront, and "guy everyone talks about" Casey Kelly, as TV's "Newman," Wayne Knight, seeks an autograph. 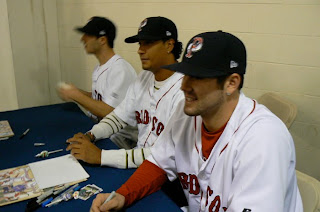 I only had a printed out pic I took of Natale to sign, so I had the other two sign pre-printed pics that were on the table--Kelly was very polite and gave a big smile (his 5,000th of the day, I'm sure), and Doubront, well, I feel like I was kind of rude since I was making sure I got Natale to sign my pic and not the one the other two signed, plus I wanted to make sure I got to talk to Jeff in what was a rushed situation. So I kind of had to breeze by Felix. I got to Natale and told him how he knew two of my cousins and he definitely recognized the names and was friendly about it, realizing I wasn't like the other dudes on the line who looked like me and were my age--that is, autograph re-seller slime. So that was cool. 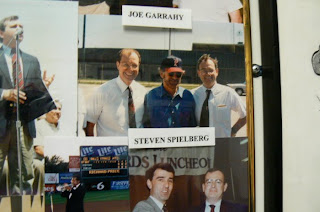 At this point the festivities were over, but Kim and I had fun walking down the long hallway full of memorabilia (which I'm assuming is closed off to the public normally). This is also when Kapstein walked by and talked to us. Above, Spielberg in a Paw Sox hat. 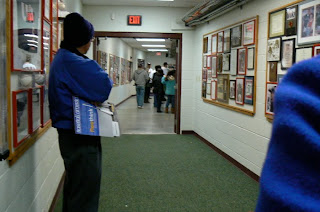 The hallway. (You can barely see that the three players from the room I'd been in are on their way out.) 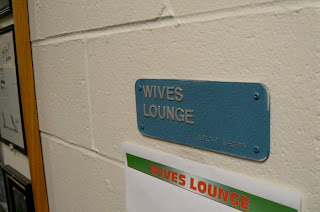 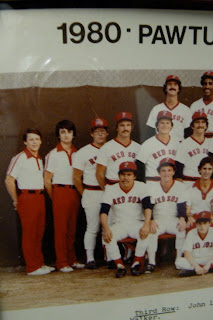 Lots of Gedman stuff, naturally. Here he is in the 1980 team pic. 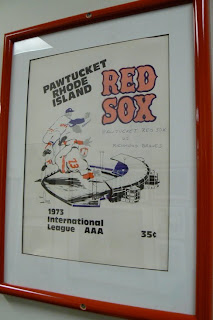 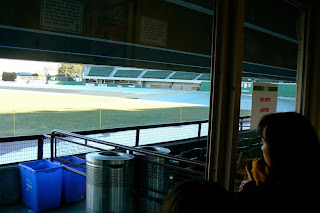 Got to peek out at the field from a suite they left open. 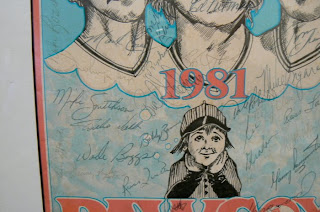 And in that sweet, this 1981 yearbook signed by the team--Gedman is right over the "19." I know that autograph well... There's a lot of great stuff in that hallway. We could have spent hours in there. I'm still wondering what they're gonna do if that longest game ever gets surpassed.

Also saw Kelly O'Connor (and maybe Cyn?) briefly but she was kinda far away and I was rushing to do my thing so I didn't say hi--but JS of Baseball Heavy spotted me and Kim and said hi in a Bouncing Souls shirt.

I like this Providence-area place. It seems to fit the Even Steven image that's adopted me--it's between big and small, between Boston and New York, between city and country....I don't think I'm a "middle"-type person, more like I like things covering the entire spectrum all the way out to each extreme, therefore my average point ends up in the middle. Or something like that.

Comments:
I was feeling pretty bored with 2010 already, so I decided to do some time-traveling back to 1925. Managed to catch the Broadway premiere of No No Nanette; what a fantastic play! That 'Tea for Two' is such a catchy tune...I was humming it all weekend.

Anyway, after the show, I was heading out of the theatre and planning to have dinner at Sardi's with George M. Cohan when who should I run into but Harry Frazee himself! Even though I was born 35 years after he died, he recognized me! Had a friendly chat with the man. Poor guy is so horribly misunderstood, I just don't understand why he's got such a bad reputation...sometimes you just need to be willing to sell some talented ballplayers to finance great theatre.

I guess everybody needs a McCarver.

Hey, you invited me to comment, it would have impolite of me to decline. At least I decided to be creative about it.

I just mean Kapstein is the bane of your existence. Like McCarver is to Leggett.

I wonder if Conrad Bain is the bane of anyone's existence.

Ah, got it. Is it possible to have multiple banes to one's existence? Kapstein would be well down my list, probably even below McCarver. Also, I just realized that Sardi's didn't open until 1927 (the owners ran a different restaurant in 1925), so Yankee Doodle Dandy and I would have had to do a bit more time-traveling in order to make our dinner reservation.

Rats--I'm amazed that with everyone in such close quarters we (yep, Cyn was with me) didn't see you! We got there around 11:30 and should have gone to the Kalish/Tazawa/Lovullo line, but I didn't realize just how many corridors we had to go through in what was already a long line for the first room. We did get through the second line as well, but Tazawa was gone and they were chirping at us to hurry. (I hate to sound ungrateful, but I wish they'd have a schedule that works for both players and fans--it makes the PawSox seem a bit like an afterthought when they don't have players appear who can actually stay for the posted times!)