MO BLOWS ONE. Ichiro walk-off dong. Click here. (Note: despite what everyone says, Mariano Rivera has had other poor performances this year. They love to get hung up on things like "that's his only blown save," completely disregarding things like tie games he entered. But if you're a Sox fan, you already knew that. So we're five back in the loss, with them out west for the week and us getting Baltimore and KC. Now onto the pictures...) 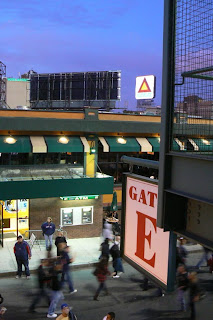 Had a single bleacher ticket. Decided to wander instead. Shot looking across Lansdowne out those windows at the Jordan's deck. 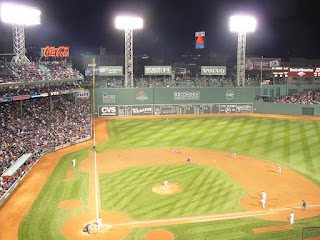 I'm getting pretty good at getting to the pavilion level even if I don't...well, nothing. 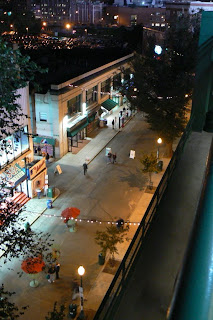 Did that thing where I went around the back of the press area. This is a shot of Yawkey Way mid-game--I was actually just "pretending" to be getting this shot while waiting for staff people to go by so I could get that shot of Eckersley in the media lounge. See earlier post for that. 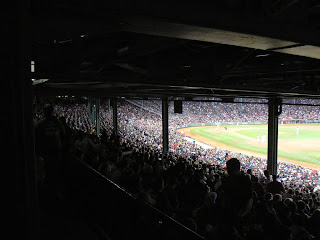 After spending a large chunk of the game with that beautiful bird's eye view, I went back downstairs and way out to the right field standing area. 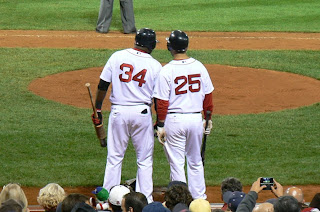 And finally, for the late innings, I went to a loge box seat by the on deck circle. Here are... you know who they are. 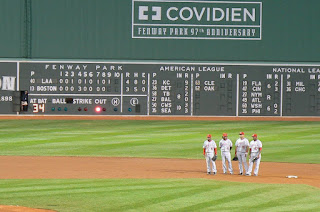 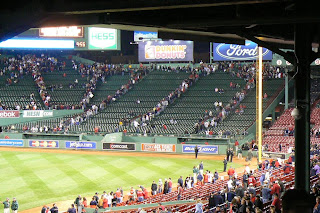 It's rare I linger in the stands after a loss. But I did since I knew I'd have to wait around for the rookie hazing thing anyway. So I got a shot of what it looks like when the bleachers slowly empty out. 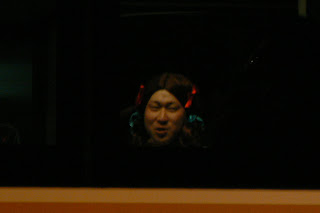 Again, it was really dark and the players didn't even come out, so it was hard to get shots of the costumes, but I did get this one of Tazawa as Dorothy in the back of the bus. Only Papelbon sits farther back on the bus, in that one seat that's next to the john. 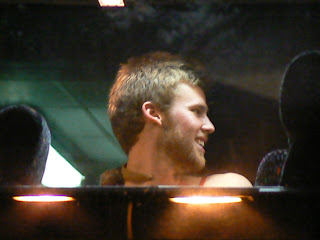 Daniel Bard enjoying his time as the cowardly lion--you can see his "ears," now down around his neck.

As for the game, terrible job by Wagner walking the leadoff man in the ninth. That's what did it.

Comments:
I like the bleacher shot contrasting the full aisles with the empty seats.
As for the game, I blame Tek more than Wagner.