Crappy Red Sox game today, which I saw most of before heading to the last Pawtucket home game of 2009. Click pics to enbig. 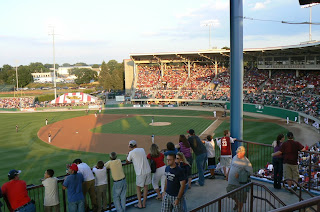 This was my first solo Paw game, so I went around and got shots from different angles. I had a voucher that I was supposed to exchange for a free GA ticket. When I got there, the crowd was so huge, I didn't think there would be any tickets at all. Some people were even passing me, going back to their cars, asking if they could get their $2 parking fee back. I assumed that meant they'd gone all the way to the ticket office and were shut out. So you know what I did? I just walked in. There was a gate, it was open. I went through. It kind of stinks that I wasted a sneak-in on a game I had a free ticket for, but still, it really may have been sold out, so I was glad to be in the building. 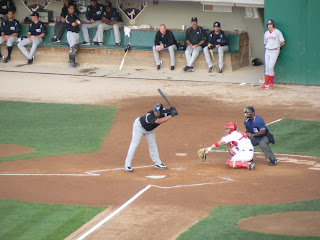 A Syracuse batter does the Jeter Jackknife. 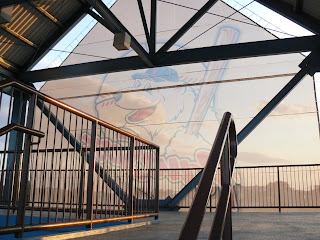 Keep staring at this picture and you'll see the sky through the backwards bear. Or try this version: 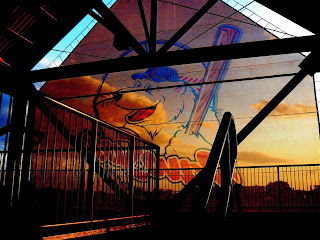 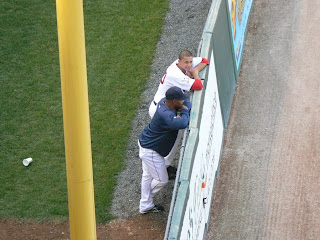 Vaquedano kept looking up and smiling after I took his picture once, so I took this one. 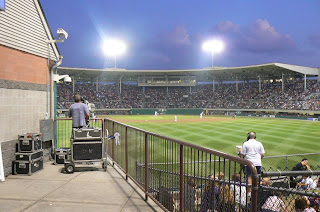 From out in CF. 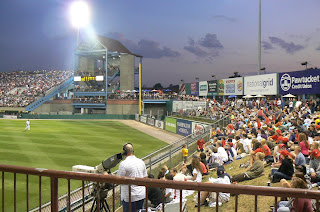 I liked the view from the ET Grasso Knoll. I should sit out there next year. On a less crowded day. 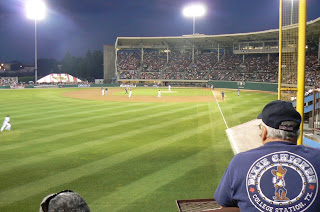 I swear I didn't square this up so Dixie Chicken would be the centerpiece. Didn't even notice the shirt until I got home and uploaded. 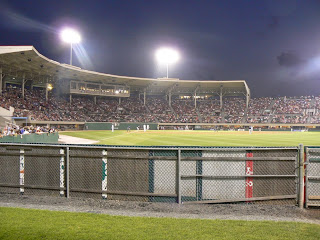 Looking through the back of the visitors' pen. 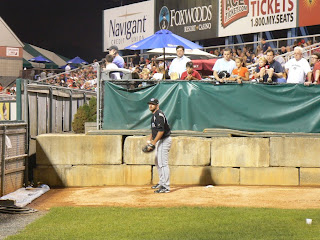 This dude was warming up. See video which doesn't capture how fast he was throwing below. 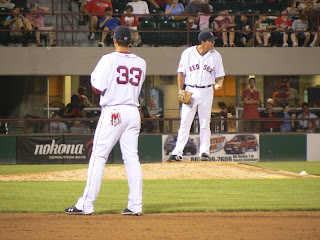 Lopez somehow pitches at every Red Sox and PawSox game I go to. Hey, if I'm supposed to be saying "Puh-TUCK-it," am I also supposed to call them the "Puh-SOX"? I like the "paw" syllable in general, so I'm going with that in both cases. 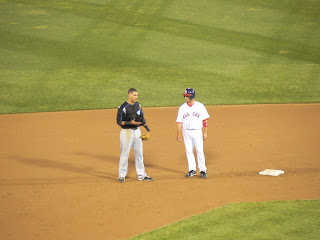 Friend of the family Jeff Natale, after his double that put the game out of reach.

So I knew ahead of time they were having the "last game celebration," so I planned to go down by the home dugout at the end. I went down, and watched as the announced the '09 PawSox for the last time. 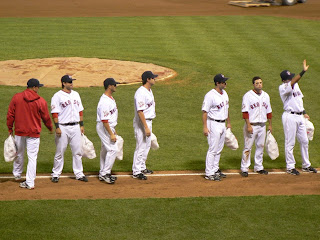 The low-number crew, including the last shot of Carter in a Red Sox uniform. He was interviewed before this line-up, and talked about throwing out baseballs, which is what turned out to be in those bags. I was hoping to "get stuff," and it turned out that was the "stuff." 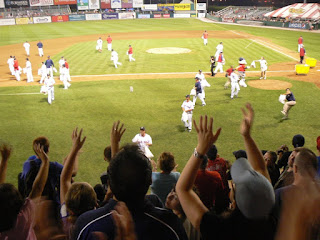 So the intros ended, and they went to throw their balls. I was right where I wanted to be. And I caught the first ball thrown! Dusty Brown came right toward me, and lobbed it up, and I snagged it. That was great, because then I could enjoy a pressure-free throw-a-thon, just watching it all and taking pics. Actually, another ball went between me and the woman next to me. I knew I'd be giving it to her, but I caught it anyway. In that split-second before she realized I was gonna give it to her, I could see the anger in her face, before it turned to joy. Below, the video of the free-for-all:

And here's the soft little ball: 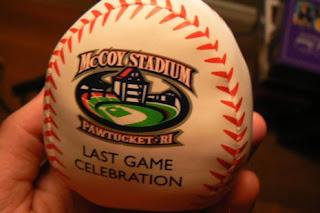 If the PawSox had thrown the ball this season with the enthusiasm they showed during this fan-toss, maybe they'd be in the playoffs right now!

Comments:
Just watched the local news right after posting this. They called the ball-toss a "tradition," so I guess everybody knew exactly what was going to happen. (I just generally thought going down close would mean random stuff tossed up to the crowd.) I did check Baseball Heavy's September '08 archive to see what to expect, but she didn't write about it. Also forgot to mention Carter's dong. And McCarver today saying "uh-MAL-ee" Benjamin. I mean, I can understand people saying "AHM-a-lee" instead of "AM-a-lee," but only McCarver would come up with a brand new wrong way to say it.

I caught one off Hunter Jones tonight.

Yeah, if I hadn't checked like 5 minutes before I had to leave for the game, I probably would have thought to check your past years until I found something about it...

Did you see Vaquedano whipping the ball on a line, trying to reach the back row? These women behind me had one fly between their heads. I bet those things hurt at 90 MPH...

I walked all around that park all night, only saw one person that could have been you but I'd say it was a definite no.

I was on the first base side. A lot of the players get all macho and try to throw as far as they can. Pitching coach Rich Sauveur was guilty of this last night.

Jose Vaquedano is a pretty nice guy, though.