I knew the Red Sox would win in their last at bat, because I was in... 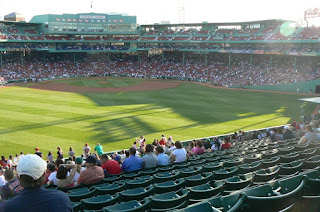 ...the spot! Section 36, the last four short rows. I was there with my mom for that game where Bay homered off Mo and Youk won it in extras, with Kim and two friends the night we rallied in the eighth as Penny beat CC, and with my dad for the Father's Day Firacle, as Green wrapped one around the pole. Tonight I had a solo ticket, and again, Sox win in their last at bat, with Pedroia doubling home the go-ahead run in the eighth.

I had something I needed to do in Boston at 2:00, so I got over to a metered spot at 3-ish. (Do you know where the four-hour ones are? E-mail me for the secret.) I was there so early, I went to the players' parking lot entrance, and who pulled in right away? 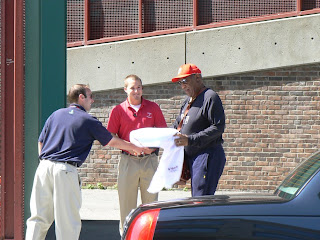 The Coz! I saw on NESN yesterday they said he'd be there, so I knew it was him as soon as I saw his profile in the limo. Then I saw... 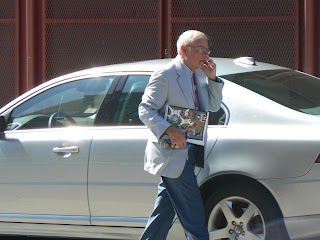 Joe Castiglione. I'd guess he was faking that phone call as he's pretty shy. Also note he's actually carrying a microphone, along with a Cape League Game program. 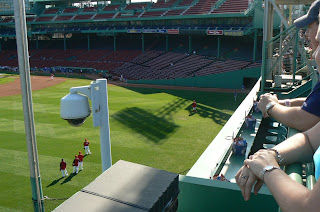 Did the Monster thing for BP again. 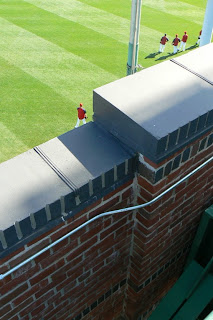 I like shots that show the inside and outside of the park at the same time. I didn't get any balls up there, but when I got down to the CF bleachers... 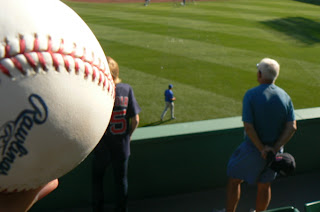 ...a KC player tossed one up. I was in my current favorite spot, behind the people up against the fence, and the toss went right over their heads to me. It wasn't a "meant for someone specific" toss or I would have given up the ball. 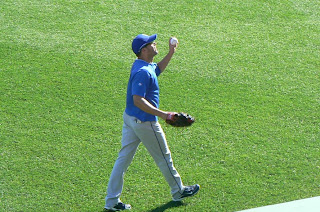 Here's the guy who threw it, now throwing one up to the Monster seats. I haven't begun research on who he is. Anybody? He's a lefty, it should be easy. 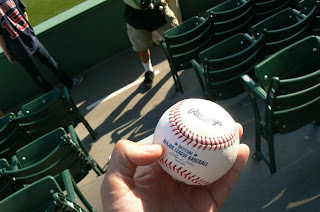 ANd what's this? A Royal then clocked one that hit behind me, bounced off the back wall of the bleachers, and rolled down to me. I was in an aisle (obviously), and I knew I had no competition behind me or to either side basically. This one went just as I'd planned it. A tween boy later got two balls tossed to him and turned to me and happily said "tied!" I love it! He wasn't pissed that I'd gotten two, but was happy to have some competition. Anyway, this was ball #15, and both pics show me in the spot I got it, as usual. Fan Foto was all over me again--this dude took six shots of me with the second ball. This is the third time there's been a shot of me on there with a ball I think. 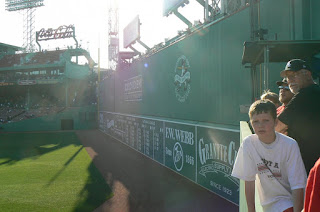 Sun setting over The Wall. 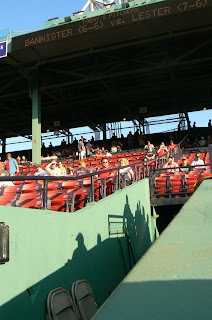 I took a little walk around after BP and got this shot of Canvas Alley. I actually had no idea the pitchers would be in this shot. 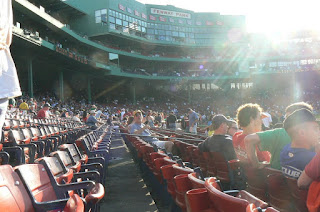 It was a non-rainy, nice day for a change in the northeast. Short sleeves, not even a JICJack taken in by me, and it was a good move, despite a very slightly chilly wind in the eighth and ninth. 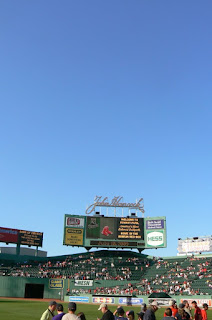 The "not a cloud in the sky," or NACITS shot. 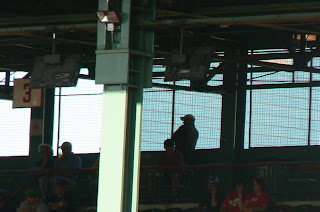 Look closely. Do you see the Hancock Building? 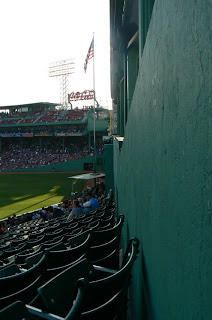 Now at the seat in "the spot." This time it was seat #1 in the second to last row, which is five seats long. I had tourists on all sides. Illinois, Pennsylvania, Detroit. I got to watch all their reactions to the Wave, which I see every game:

Me (to self): Now it's gonna start again because it didn't make it to the grandstand.

Me (to self, yawning): Now it's gonna hit the "dead zone" behind the first base dugout but on the next try, make it through barely, appearing to die until it rounds the home plate corner at which point it gets going again at full force since that section of the crowd is facing the outfield and has followed the thing around.

Me (to self, just sitting there, eyes rolling, hoping I don't miss the next pitch as people stand in front of me): Now it's gonna reach section 33 and after a not-quite-long-enough pause for the Monster people to do it, start up again at the center field corner of the bleachers....

It was actually a really good one, going around maybe eight times. I've never stood for the Wave, but I know it all too well. 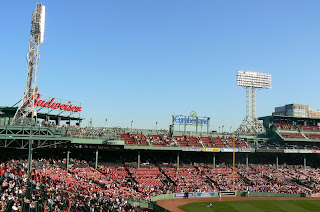 My view of right field. 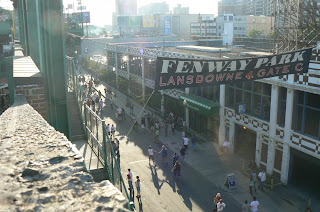 Lansdowne Street over the fence behind me. 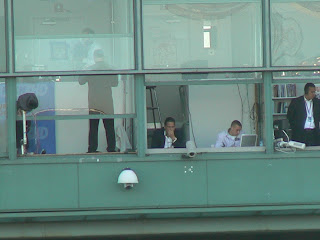 Is this Don up in the air guitar spot? 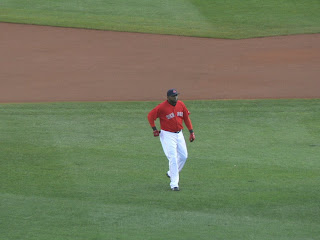 Papi in the red jersey and socks hat. 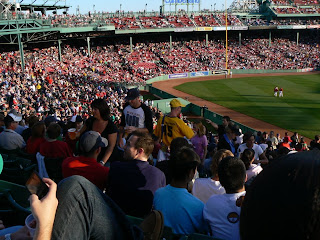 I'm tellin' ya, there's always one hardcore or metal shirt at Fenway, and one Whalers shirt or hat. Here's Black Flag. (I didn't get a picture of tonight's Whalers guy, but it was a gray tee with the logo on the front.) 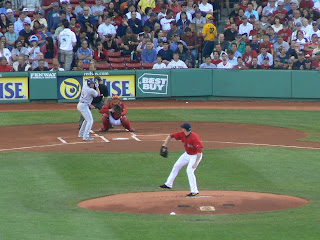 Lester pitched a fine game for us. 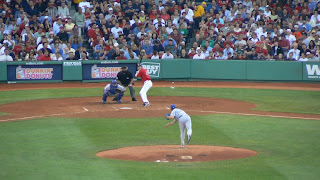 As did Floyd Bannister's kid for them, but we prevailed 1-0. 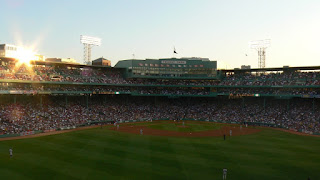 The sun has just about set. I went to the widescreen for this and the shot above it. 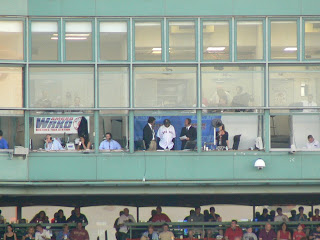 As soon as I saw a third figure in the NESN booth, I knew it was the Coz. 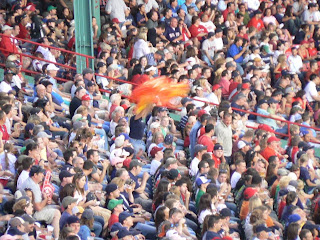 I've seen some crazy beach balls in the Fenway bleachers. But this was my first giant lobster. 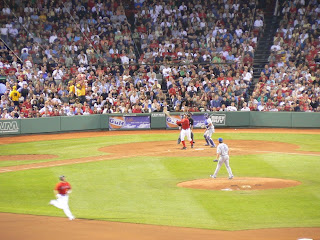 Varitek has just hit what looked like a dong. But it was foul. By the way, Nick Green's at bat music wasn't "Stayin' Alive" for long. It's some song I don't know now. But Youk is stil "Man in the Box." 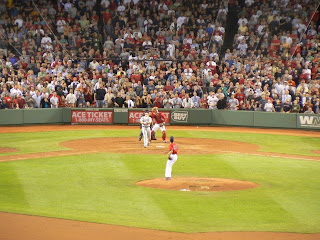 Papelbon gets the last out on a pop-up.

Here's some footage after the win, at the end of Dirty Water, going into Tessie:

Why do people always give all the credit to Dirty Water as "the" victory song? The victory trilogy for some time has been Dirty Water, Tessie, and Joy to the World (you know, "Jeremiah was a bullfrog"). Lately, Tessie fades out at the end, and Joy to the World fades after maybe one chorus. Then they go to the organ, where it's often Build Me Up Buttercup. And tonight one of the ones after that was Some Guys Have All the Luck. After a loss it's always organ music, often Will You Still Love Me Tomorrow or On the Road Again if it's the final game of a homestand.

Bruce Chen can be a real jerk! During BP, he kept teasing fans with balls, often throwing one just out of reach of kids over and over. At one point he threw to the crowd above the bullpens, and they dropped it, causing him to throw his glove down. Maybe his frustration with them was why he did this: He was standing by the open gate in the 17-18 foot center field fence. I was above him. He threw the ball up once and caught it. Then we all heard a bang on the ground right near us. It sounded like a ball landed, but we all looked down, and there was nothing there. I realized he did that thing you do to the cat where he's sitting on a table, and you start scratching the underside of it, and he thinks there's something on the table below him, but he can't find it. Chen had entered the gate, and threw the ball up at the underside of the bleachers below our feet! The difference with the cat is that eventually you let the cat in on it. But Chen came back onto the field, and right then, BP ended, so he ran off with the ball, flipping it up and catching it as he jogged away. I would have liked the act had he not actually kept the balls at the end. Here's the video of that end part: (note: the voice you hear is not mine!)

Comments:
You're right on about Pedie not following through with his tags at 2nd. He didn't stay with it again when Teahen came into 2nd on a sac fly. He beat the throw, but came off the base and Pedie had already made the late tag and given up. Luckily the ump missed the call and the runner was out. That was a very important play.