A memorable night at Fenway, despite the chimpy game. Kim and I, both of whom have always loved Nomar, got there just as the A's started BP, and went right down near their dugout. Got lots of pics. Nomar was so nervous he was swinging and missing in batting practice, before finally launching some out of the park, as people cheered him on. Then he started signing, and fans in their Nomar shirts (I wore mine, but I actually wear it a lot) and with their welcoming signs flocked to him. He was off to our right at first, then went out past third base, and finally came back right in front of us. It was fun stuff. 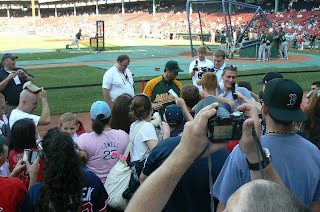 Out in the bleachers, I filmed his intro during the starting lineups, and among the cheers, the old guy behind me let out a half-hearted boo. The guy proceeded to not even cheer for any of the Red Sox. A curmudgeonly type. Needless to say I used all the dirty looks I've saved up that I wanted to give cell phone drivers but couldn't because they don't see them because, of course, they're not paying attention to what's around them. On this guy. 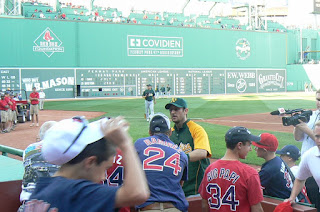 Then it was kind of weird how things set up. The first ended with Nomar on deck, so we knew he'd get his ovation to start the second, which would be cool. But then the scoreboard beat us to it after the top of the first, with a message welcoming him back, and a live shot of him in the dugout. It was a big cheer, but we knew we'd be giving the "real" cheer a few minutes later. And we did, and it was great. And I watched the replay just now here, and not only does the Modern Lovers' "Roadrunner" get in the clip, as it was being played between innings, but right behind Nomar in the second row is a Minor Threat shirt! Sweet! He's behind and to the right of the Jack Daniels shirt guy. Anyway, our one booing friend and his three wives just sat as everyone else around them stood and cheered. 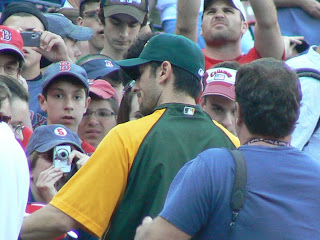 Other stuff from tonight: Several players have changed their at bat music very recently. Jacoby is now "Gangsta's Paradise" (though Kim suggested it could be "Amish Paradise" since you don't hear the lyrics), Youk is Alice in Chains' "Man in the Box," and Nick Green is "Stayin' Alive."

Janet Marie Smith walked by us randomly. I yelled her name and said "nice job."

We had to answer the "why are you guys booing Kevin Youkilis" question from the people next to us and later the people behind us. Overall, between those two groups, the shriveled dick guy who booed Nomar and his harem of witches, and the couple in front of us, we were in a "no reaction section." That's right, these people wouldn't clap for anything. It was like they were watching a movie. We got shut out on a couple of lousy hits, so the fairly uninspired crowd (other than for Nomar) was to be expected, but some people just treat it like a movie. They just sit and stare, emotionless. Until Sweet Caroline. And we were surrounded by the ten people in the park who act like this. So the night got chimpier as it went on, but we got to see our old pal Nomar, and it turned out the Yanks almost won but still lost, so an okay night all things cons'd. 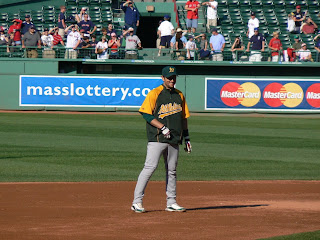 Oh, one more thing. Tonight's trivia question on the scoreboard was, "Carlton Fisk won Game 6 of the 1975 World Series with a 12th inning homer. But who hit the game-tying home run in the 9th inning?"

My answer was, "Bernie Carbo. AND IT WAS THE EIGHTH INNING." Can you believe they'd mess that up? At Fenway Park? 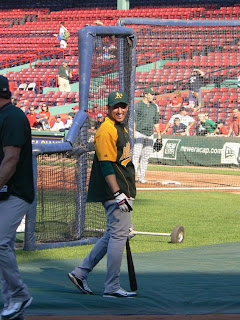 Glad you were there, Jere. Watched it at home, and was really proud to be a Sox fan with the reception Nomar got when he came up to bat.

Was there ever any doubt?