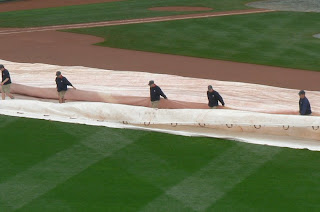 We found a metered spot (Sunday=free) and then headed to our 12-dollar seats. We got there as they were taking the tarp off. 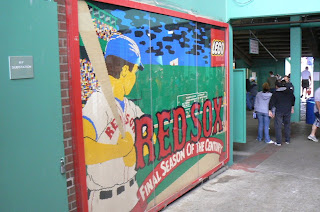 Walking around underneath, we saw this giant Lego creation that seems to be from 1999. How is it that I've never seen this before in my life? It's out by Canvas Alley. 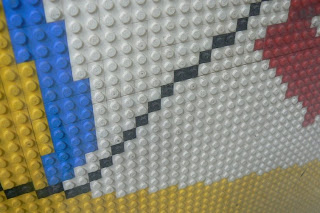 Here's a close-up. Hey, why are the clouds black? 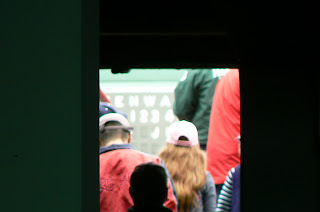 If you look at the first Lego shot, you'll see a runway to the field in the background--here's a zoomed in shot of that spot, showing the scoreboard on the Green Monster. 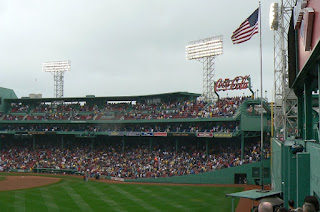 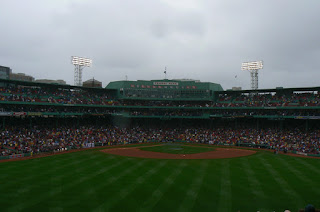 This view should look familiar. Again, I was toward the top of section 36. For that incredible Friday night game against the Yanks in April, I was in the top row, row 30, the two-seat row. For the Thursday night comeback win against the Yanks, I was in row 28. On this day, my dad and I were in row 27--all three seats in about a 12 by 12 foot area. Is this the lucky spot or what? All three games, the Red Sox have won in their last at bat. 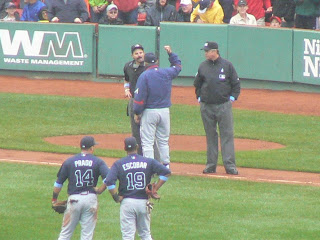 I didn't take too many pics during the game, but here's the part where W.B. Mason threw Bobby Cox and some other Braves out of the game. 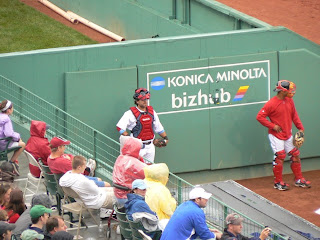 Above left, Dusty Brown, who was called up as Kottaras' back-up for this game only. Oh, and let's talk about the security guard jacket exchange. Whenever a new pitcher comes in for the visitors, that bullpen area security guy (the one who looks like the kid in Billy Madison with the rat tail who says, "hey look everybody, Billy peed his pants") runs out with the pitcher's jacket. Another guard from the dugout area runs out to meet him behind second base and take the jacket. For a while, they did a little curl pattern on the exchange, neither guy stopping before heading all the way back to their original positions. Now they're switching it up, going a few steps past each other, and cutting back on their original paths in unison. The Billy Madison guy seems more into it, like he's mad when the dugout guy doesn't give it his all.

Anyway....the game went to the bottom of the ninth, and I started getting my camera out, to tape a possible walk-off win. While taking it out, I told my dad how Nick Green had hit a walk-off homer for the Braves against us in 2004. And before I could get my camera into video mode, Nick lofted one to right toward the pole. I just held my camera up over my head, no time to zoom, and shot in the general area. Here are the three shots I got in order: 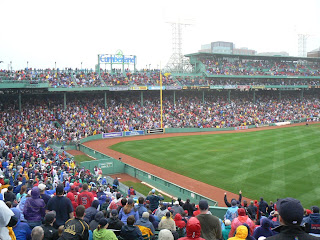 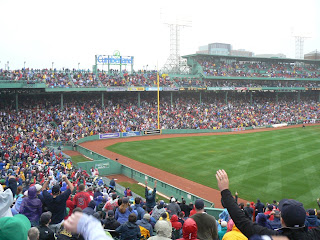 More people realize it's a homer.... 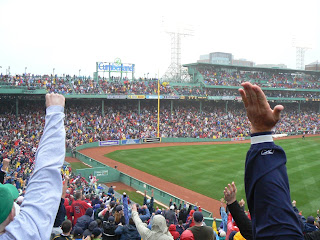 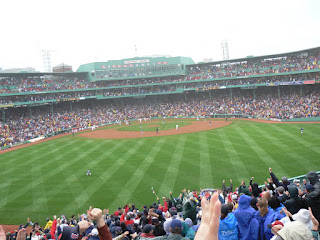 Nick rounds second as the Braves WALK OFF the field. It's rampant now--that is, people referring to the home team as "walking off with a win." Every walk-off is referred to like that in mlb.com headlines now. It's horrible. Again, the visitors (the only team on the field in the first place) are forced to walk off when the home team ends a game on offense. Hence, a "walk-off." I have a new theory as to why people are confused, though. I think people are thinking of it the same way you'd say a team (figuratively) "walked away" with a win. So in a walk-off win, it makes sense to them to say the home team "walked off with a win." Even though the term is obviously referring to the visitors. I wish Eckersley would clarify this, as he coined the phrase! He's got Orsillo right next to him completely misusing HIS term!

So then I switched to video mode, and caught Nick crossing the plate. That vid is here if you missed it. I attempted to show me and my dad but I screwed it up. That's why the camera circles around for seemingly no reason.

Red Sox (and me!) go to DC this week. More details on that later.

Comments:
The other way that "walk-off" makes sense to me is that in all other cases, a team is forced out of an inning by running out of outs. In a walk-off, the offense walks away from the inning with outs left. Yes, you could interpret "walk 'off'" more stringently as applying to the defense, but I'm personally fine using it my way.

Jere, great shots! I'm curious, between games at Fenway and the road, how many do you get to in an average year? Usually I only make 2 or 3 total. Missing the Braves series in Atl; so close!

You can't walk off something you're not on. I mean, everybody walks away from the park eventually, but it's the fielders being forced to walk off the field. I really wanna hear Eck address this--since he's always saying things from the pitcher's perspective, it makes sense he's talking about the defense. But I still say it can only be about the defense, because they're the ones on the field at the time.

Plus, the way you just used it is like the way I was saying people are getting confused--you said they "walked away from the inning." That's a figure of speech. Whereas the term walk-off is referring to having to actually walk off the field. You can "walk away" from any win, any inning, etc.

And Ted, thanks. I go to, like, well, see my photo galleries and count 'em up! It's like maybe high -teens-ish per year. I've been pretty good about doing my stats at the end of each season.

That area must be the first upper bleacher seats they sell for any given game. I was in seat 1 of row 31, just above the 2-seat row, against the Mets, and in row 30 seat 1 of section 37, just across the aisle, against the yankees. And I just noticed my friends have the 2-seat row for an upcoming game where I'm down closer to the field.

Both games I sat there for had a homer over the Green Monster, and it's cool because you can look over the wall and watch people chase it down on Lansdowne. Just don't get stuck up there in a downpour!

Two of my games there have been rainy, but nothing like the one you got stuck in that time I was under cover. Between us we really have that are covered.

Did you get to play catch on the field?

I actually mentioned this in an earlier post--they announced a few days before that it would just be a walk on the warning track, so we said screw it since A. we've already done one better (having a catch on the actual field) and B. you can walk the track on any Fenway Tour. And C. the line was reeeeeally long anyway.