View Larger Map
Above is the overhead view of the Hilton Chan and I stayed at in Washington, DC. We got a double room for 100 bucks right on the hotel's website. Knowing it would be in the 90s in DC, I was looking forward to that pool.* But when we got there, here's what we saw out our window: 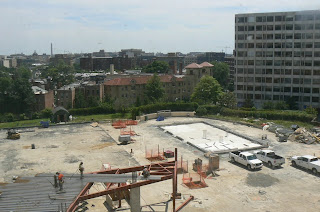 ...and that's why the rooms are so cheap. The hotel was going through a major overhaul. Anyway, it was still in a good location and was very clean and nice-hotel-y: 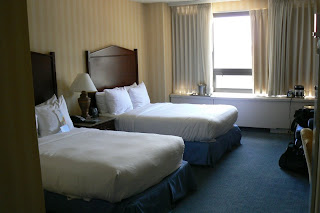 We also got a pretty good price on train tickets, and I paid face value for game tickets, so it was a pretty cheap trip. 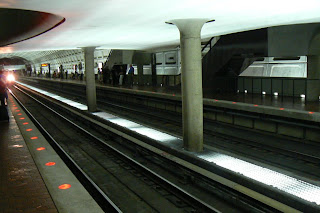 There were delays on the Metro since nine people died on it three days earlier. 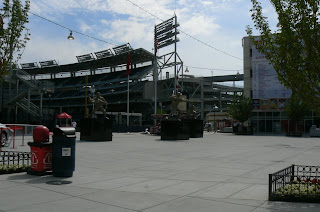 And here we are at Nationals Park. 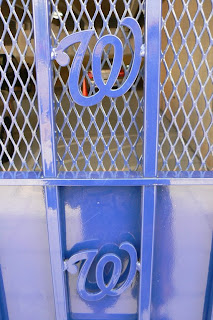 There are Ws everywhere. But a lot more Ls from what I hear.... 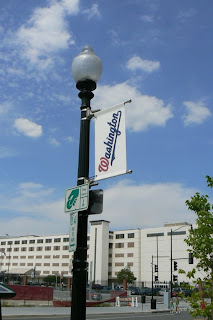 This is NatsTown or whatever. 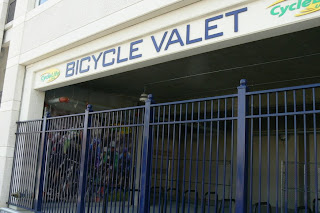 The stadium has a bike valet. 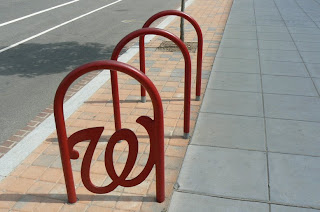 And Ws on the bike racks. 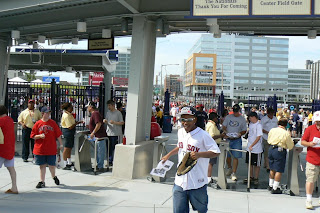 When I do anything with Chan, he's always stopped for much longer than I am at security check points because Americans are racist toward Asian people. We're always right next to each other, and then I turn around to see him still getting searched. So while I waited, I turned around and got this shot of people entering the gates as they opened at 4:30. It was mainly Sox fans.... 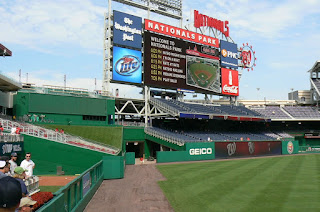 Down in left field looking up at the board. 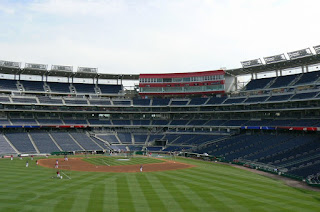 On our way out to try to get balls in right field. 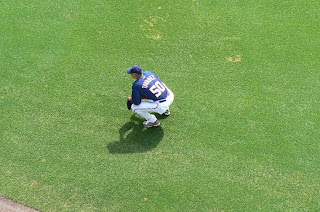 In my spot in the right field second deck. I got Tavarez to give me a wave, but no body was throwing balls (or hitting balls) up there. 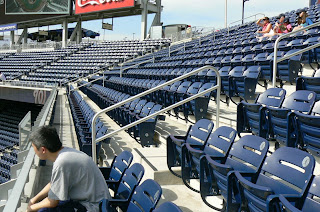 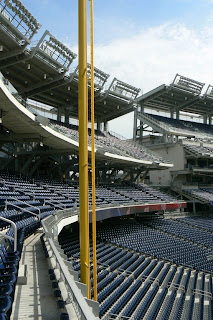 And to my left, even more space. 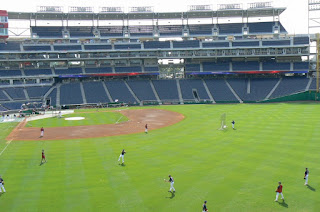 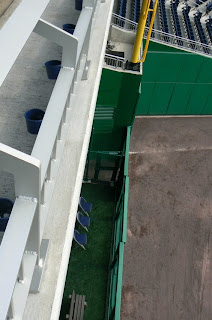 And straight down into the Nats' pen. To read about the ball I finally got up there, see this post. 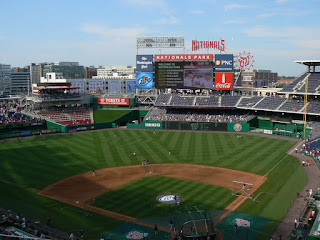 Now we're at our seats behind home plate. 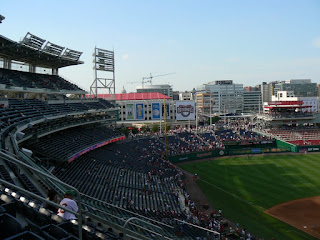 The Capitol was visible from our seats. 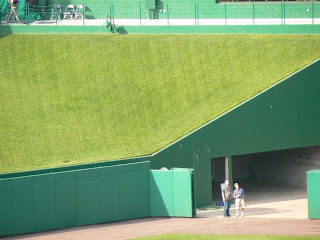 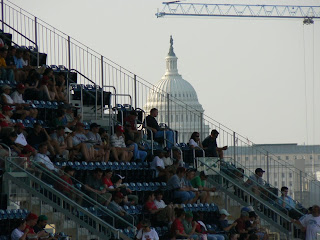 Fans in front of Capitol. I liked how you could see it from up there, but most of the buildings visible beyond the outfield were just modern, glassy, stumpy office buildings. Not Washington-y enough. 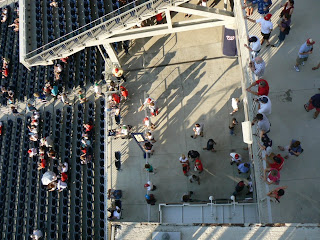 I was getting shots from different parts of the upper deck at this point. I also met Drew before the game. Remember the guy who took those great photos of the Sox at the White House for me after the 2007 championship? He had much better seats and got some great shots at this game. Thanks, Drew. 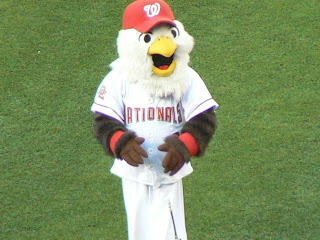 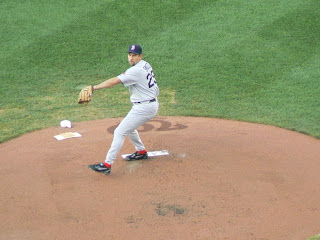 Smoltz' second pitch as a Sox. 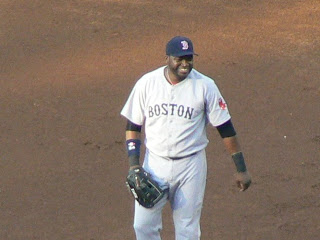 Papi in the field. He made a nice play before this, but later missed a ball. Smoltz stank at first but settled down. But Zimmerman shut us down anyway, and we'd lose 9-3. 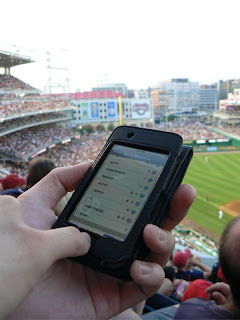 At one point, the woman next to Chan said, "Michael Jackson died." Whoa. Chan took out his ipod to get more info, and check it out, he was picking up a wireless network called JACKO! Anyway, all night I tried to explain to Chan what a big deal this was, and he didn't believe me until later when every channel on TV had Jacko stuff, every store played his music, every newspaper had his face on it. I never actually bought the albums, but that guy's music was just always around. And I always felt bad for him--any time a person is a bit of a freak, he gets picked on non-stop. I feel like society killed the guy. A lot of the things he did me might have done anyway, but as MattySox put it when I met him the next day, he may be the first person to be killed by late night talk show jokes. 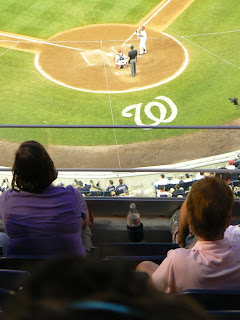 I knew Kelly would be there but with such a huge crowd (a record for their park) I didn't think I'd spot her. But all of a sudden, some people in the rows in front of us left, and the front row by the field became visible. And there was the red hair and the big lens. What are the odds? Had she been in the second row or beyond, or pretty much anywhere but in that spot, we never would have had a chance to see her. I bet she got some nice shots from there... 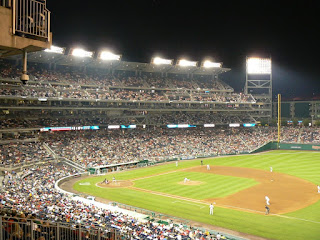 Night falls as the Sox get blown out. 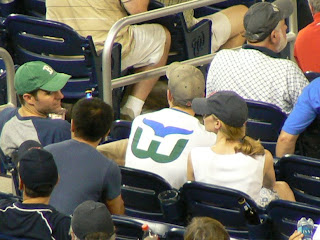 There's always one Whalers fan at every Red Sox game--but seeing one on the road is rare.

So, here's my take on Nationals Park. It's nice-looking and all that (though I'm still waiting for one of these new parks to actually do something different instead of copying all the other ones, which is just going to leave us with a league full of cookie cutters, kind of like what we were trying to get away from in the first place). But the whole operation is minor league. It's a lot like an NBA game, with the drum beats between every pitch, the announcer saying each hitter's name like he's the heavyweight champion of the world, the flashy scoreboards telling fans when to cheer. They actually referred to that President Race as "the main event." In other words, I'm glad we've got Fenway. There's just nothing like it. 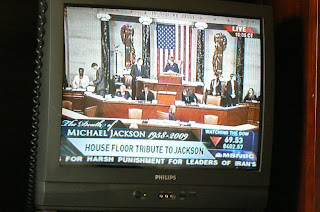 On TV the next morning, it was all Jacko. 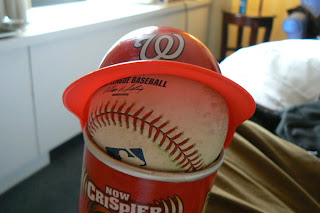 Here's the ball I got, and my Nats' ice cream helmet.

I guess I'll stop here and show you my touristy pics later. We spent all day Friday walking around DC in the oppressive heat.

*Note, 3/27/2012: The joke at the time was that the satellite view showed a beautiful pool. I see that as of now that view is the very same pool-less concrete that was there when we got there, killing the whole joke.

*Note, 6/25/2019 (ten years to the day!!!): Now that view is a little off to the right. If you go over to the hotel you still see the concrete, but on Street Views you realize there's a whole new building in the spot where the concrete was, The Hepburn.

Comments:
Let me know if you can see Drew's pics on that Picasa page. I'm wondering if it's maybe only visible to me since I got the invite from him...

And I have to say, while what I said about Chan being searched is absolutely true in general, this particular delay could have been because he's nice and he sometimes lets people pass him in line, because he didn't even have a bag to check. Between his politeness and racism, I'm always turned around waiting for Chan.... at Penn Station we were the first two people to get to the gate to board our train, yet when I turned around after passing through, 15 people came through before I saw him. He said "I got stopped by the dogs!" It's crazy how many dogs and machine guns there are at Penn Station. Oh, and it was also the day of the NBA draft and we saw people lined up that morning at MSG.

I wasn't too far away from you guys... Norfolk, Virginia for Pawsox action. I heard about MJ in a restaurant via my friend getting texted. I was incredulous, but then people stopped us on the street...

Anyway, Friday night I 'slept' on the floor at Dulles. I saw a drug-sniffing dog walking the concourse, which must have made passengers with weed in their knickers panic a little.

Yeah I noticed you and I went from roughly and to roughly the same places at the same times....roughly.

Jere - I was the one sitting with Kelly - thanks for posting that picture!!

Cool, I'm glad you got to spot yourself! Also, nice seats!