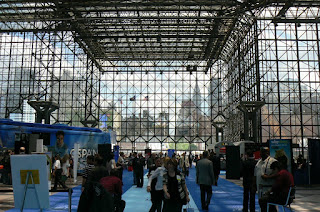 This weekend I was in New York City for BEA. No, it's not a convention where scores of Bea Arthur fans from around the world celebrate such fine works as The Golden Girls and Maude. It's Book Expo America. Knowing that my mom and I would get to attend (since we wrote a Red Sox mystery, new people), I suggested Kim try to get her soaps into a street fair the same weekend. So as it turned out, all of us and our friend Kara took a nice little vacation, with each of us also seeing friends that live in the city.

Saturday we woke up at 6 AM in New Haven, where we stayed at my parents' house. We had to load two cars' worth of soap-related goods and tables, chairs, and a tent, into my dad's van--aka The Pac-Men's 2001 tour bus--, get to Washington Square Park, load out, and set up by 9-ish. Then I had to haul ass up the Javits Center to meet up with my mom for our signing at 10:30. I made it by the skin o' my teeth, and we were sad to see no one on our line. But wait! There were people waiting to get their signed copy of Dirty Water, they were just forced to wait really far away from us until exactly 10:30. At that moment, the flood gates opened. After quickly going through a box of books, the woman helping us asked if we had another, saying "your line is huge." Sweet! We did have another box, but we went through all of them, signing for dozens of people. By the way, these are people from bookstores/libraries/publishers from all over. This BEA is like Devlin McGregor--it's a monster. 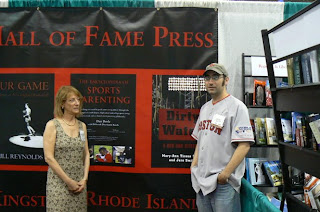 So then I manned the Hall of Fame Press booth for a while, before going back downtown where Kim and Kara were selling soap on the street, to get them broken down and loaded back into the van. By the way, I got a sweet Tues/Fri street cleaning spot that morning, and I knew right then we were gold for the whole weekend. 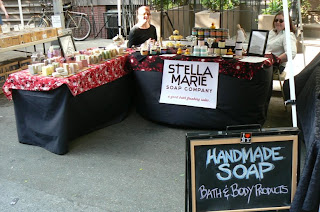 I'm leaving out a lot here, but it was a crazy and hectic day, but well worth it. Better than staying home and listening to a Woody Woodpecker CD.* And the weather was perfect--high 70s. And I got to eat at my favorite Indian place with Chan.

Then on Sunday, after a chocolate breakfast, we had our second signing at BEA--this time at our distributors' booth. You know what that means: If we get another huge line, they'll see just how awesome our book is, and start selling it more. And our fans came through again! This time they actually had to cut the line short at a certain point, as we again went through all the books we had. This time we got to sign a lot of books with "Yankees Suck," which is always fun.

And after yet another long day, I'm back in Rhode Island. I missed a lot of baseball action, including the Indians losing to the Yanks after having swept the Rays in 4, and the Jays beating the Red Sox, after having lost 9 straight. And the same thing happening again the next day. But today we made up for it, us walloping the Canadians, and the Indians winning in their last at bat against the Yanks. Those "ghosts" that seem to get all the credit for Yankee wins sure do love their days off. Eight years' worth and counting.

Oh, on Saturday at the convention, all of a sudden from a nearby stage I hear, "ladies and gentlemen, Wesley Snipes." Holy crap! I immediately grabbed my camera and vacated the booth I was supposed to be watching, to get shots of Willie Mays Hayes in the flesh: 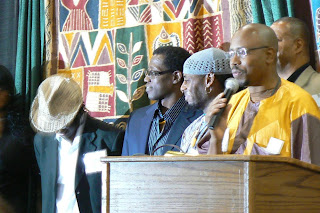 And now for some more pics: 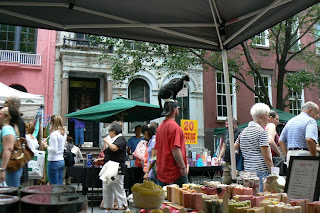 Man with cat on head. Also note one of Kim's soap cupcake. 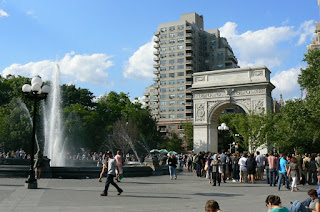 I can't remember the last time I saw the fountain in Washington Square Park actually functioning. Empire State Building at far right. It's funny, Kim was down there, and you can see the ESB from there, and we were up on 34th and 11th, and you can see it from there, too--see very top picture. Even though I was obviously intending to get it in my photos, the whole thing didn't really hit me until now. 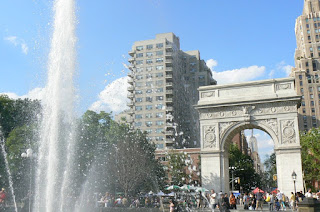 And there's my shot of it under the arch. 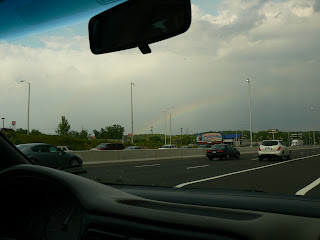 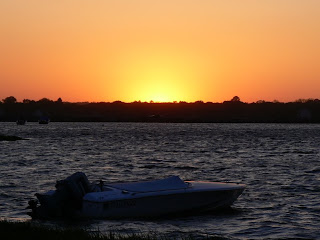 After dropping my mom off, and with Kim and Kara getting back into Kim's car in CT, I went the rest of the way by myself, and had to do my usual stop in Old Saybrook. I got a nice sunset shot over the causeway. Look closely in the middle to see a car on the causeway.


*When my band was planning our tour back in '01, we got to a point where we didn't have a lot of shows booked, and Brian and I were sitting in our Danbury apartment, wondering if maybe we should put the tour off until the following year. Our friend Prorock was sitting there, too, amd while looking through my cds, he chimed in on the subject: "Yeah, you could always just stick around here and listen to this Woody Woodpecker cd instead." That's all I needed to hear--plans for the tour went on as scheduled, and we went all the way to Cali and back, and had a blast. Thanks, Prorock.

Comments:
I love Old Saybrook! I once had to spend a week working in CT. I stayed in OS and spent much of my down time wandering around. Alone.

The Florence Griswold museum over in Lyme is cool, too.

I remember you commented when I brought up the Heritage Motor Inn that time. I actually thought about pulling in to their parking lot to eat, but it was empty and they woulda thought I was doing whatever, so I went down to the point where mini-golf is still played, I'm happy to report. Old Lyme was the other shore town we'd go to, but only when I was very young.

Cathy and I have very fond memories of selling soap in Washington Square.
We did the spring and fall shows there a couple of years then dropped back to just the fall show due to too many complications with the LL schedule in the spring. The fall show was always around Labor Day weekend and we had a blast and made decent money too. Our spot was on Greene St. I believe, right around the corner from one of the entrances to the park. There was a small mall with a great Thai restaurant and a statue of former Mayor LaGuardia in front of our`space.
Very good memories.

This post actually brought a flood of memories. We met a really great person at the Boston Flower Show who loves in Niantic. I believe that's right between Old Lyme and Old Saybrook, no? At least right there at those 2 spots, I'm sure. We became very good friends with her and her husband and would often stay with them in Niantic when we did shows nearby. We made trips to Old Saybrook a couple of times to check out art and craft stores. Their place also became my stopover on the way home home from Boston. I know, it's nowhere near halfway, but A - I was always leaving Boston late and wouldn't get to Niantic till around midnight and B - I wanted to see them. They had a really cool little cottage right on the coastline with a "crow's nest" bedroom over the garage that overlooked the sound. Cat and I got that room when we were there.
She was also responsible for getting us into the Big E, which we did the last 3 years we were in business.
mmmmm, excuse my meandering.

I'm glad I could bring back the memories! I should suggest The Big E to Kim. I don't think we've thought of that yet.

Darn, I should have went to the distributors booth. My copy doesn't have "Yankees Suck" on it...argh.

Sounds like you had a great experience. I should be posting my review of this book this week on Savvy Verse & Wit.

That's great! Thanks so much... I look forward to it.