Pics From That Awesome Game

Pre-gallery notes: Cheap food extended into May! (As I thought, since they did a radio spot for it after the last April home game had been played.) And--get your Don Orsillo shirt. (Let's see if more people than just my mom and Michael Leggett buy this one.) 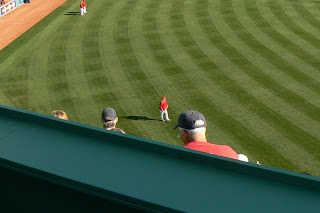 With bleacher seats in deep center, I didn't plan on many game shots that night (although I shot video of Bay's game-tying HR), but I did get some interesting pre-game shots. First, I went up on the Monster with my RSN card--my mom was supposed to meet me, but was late, so I went up without her--but she gave a sob story when she got there and joined me. Above, Papelbon down on the field, who would boo the fans up there for missing a ball tossed up to them. 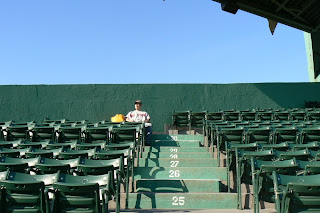 Now I'm in my bleacher seat. My mom took this shot of me. When I bought these, I was excited at the possibility of being against the back wall (seats # 1 and 2) and a very short row, due to the angle of the wall. Sure enough, it was a two seat row! You can see the yellow bag on the seat next to me. That's the row. In front of us, a five seat row, and they get longer as you go down. 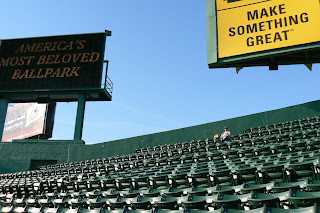 It was like having our own non-luxury box. We had room to either side and behind us, never had to get up for anyone, and could stand whenever we wanted. I'd watch the last few crazy innings standing, leaning on the back wall. 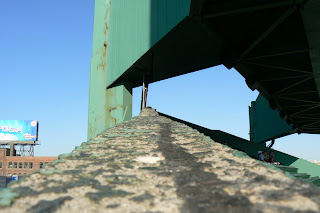 Looking along the top of the back bleacher wall. Look closely and you'll see the antenna of the Prudential building right at the top of the wall, and you can see some of the bleacher seats at right. 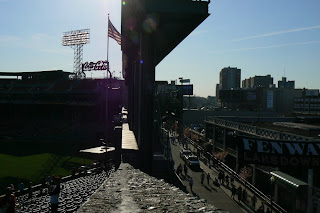 And turning the camera around, looking back down the back wall toward the Monster Seats, with Lansdowne Street on the right. 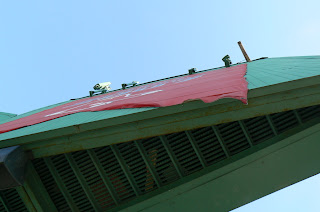 Looking straight up at the underside of the centerfield message board, with the red '07 WS flag barely visible. 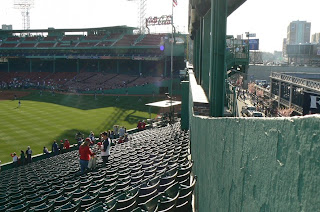 Another shot looking to the right. It was a gorgeous day with classic Fenway chill as soon as it got dark. 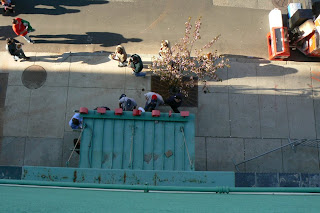 Peering over the back wall down at a ticket window on Lansdowne. See the letters spelling out "TICKETS"? 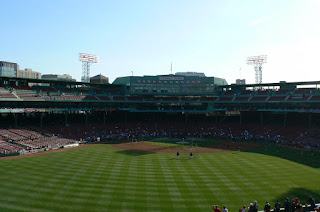 The field from our "box" seats. 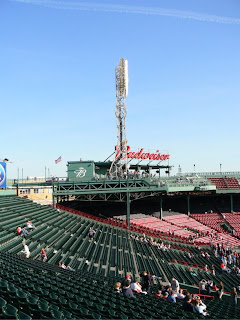 Our view of the light tower was from the exact side-perspective. 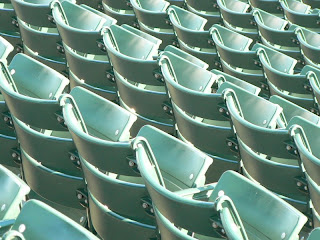 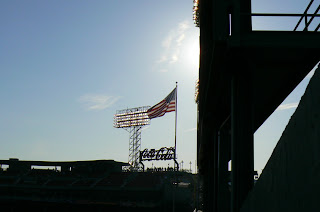 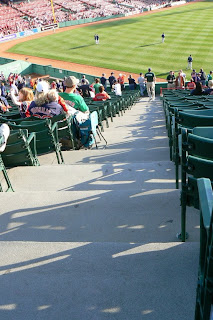 Looking down the bleacher steps.

Some Yankees with long shadows. 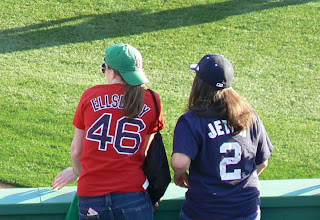 There's always plenty of this at Sox-Yanks games. (Also note the long shadows on the field and of the Sox fan's hand.) 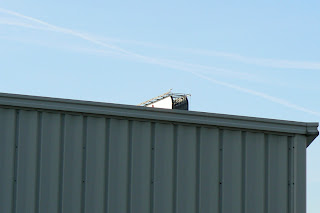 Turning around, looking straight out over the back wall, this is all we could see of the Citgo sign. 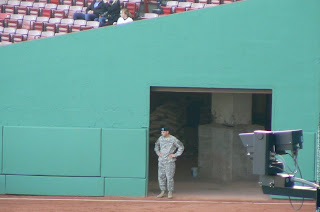 Military dude--and note another camera on top of the roof of the camera well. Since NESN no longer regularly uses the well, with that crappy new robot cam in the straightaway CF position, maybe they put this robot cam here in case they want the "classic" (but a little higher) shot for replays. That new view is still messing with me. On the first game of every road trip, we say "whoa, this camera's waaaay to the side!" And then we realize it's "normal," and we've just gotten used to the NESN straightaway shot. 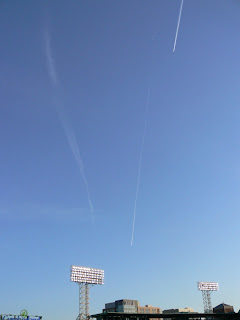 Vapor trails or whatever. 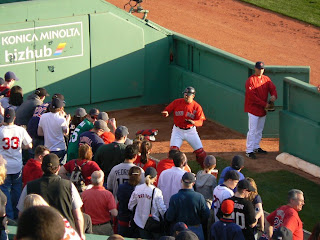 Tek isn't making a weird motion to the crowd, he's stretching. There was quite a crowd gathered watching him, considering you can see this every game. 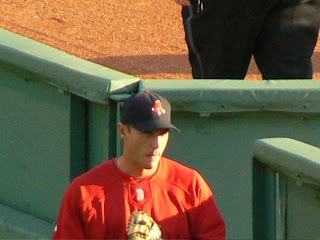 It was our first live look at the socky hats.

Finally it was time for... 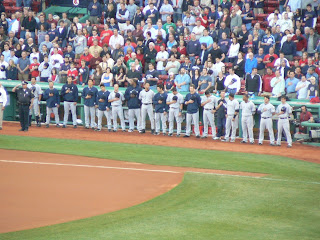 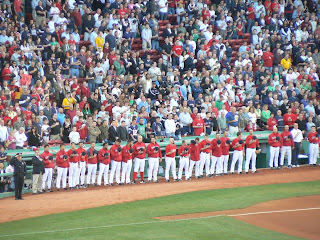 And you all know what happened that night. But I did do a further description in this post, and the video is linked above in this one. But here are just a few shots from during the game: 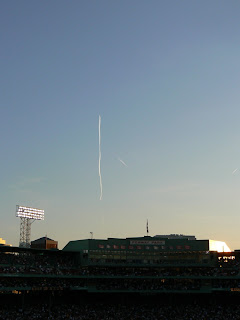 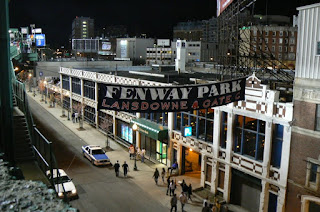 What Lansdowne Street looks like during the late innings of a packed Yanks-Sox game. 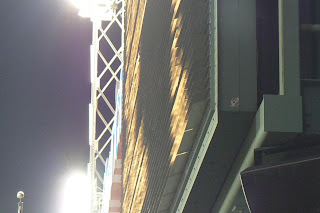 Looking up and to the right at that board that gives lineups and stuff--this isn't blurry, look closely. Weird how that board was made. 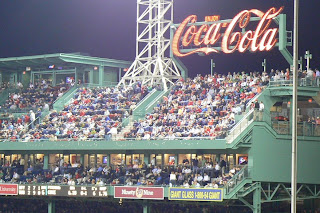 And Phil Coke enters the game! (Too bad his name is kind of blurry, woulda been a great shot.) 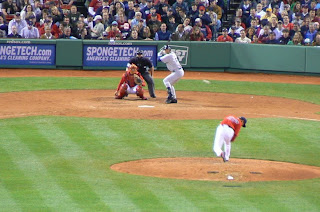 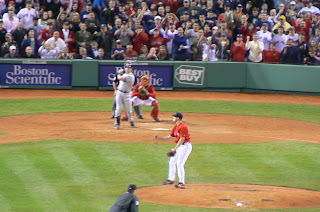 Papelbon strikes out Teixeira to end the top of the...tenth I think. 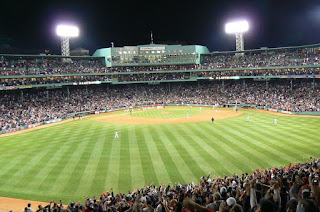 And Youk rounds third on his walk-off homer, and we all go crazy, and then hang out until every fan has left Fenway....

Then the Sox came back from down 6-0 to win the next night, as I watched from the bleachers again, and the next night I went yet again, got a batting practice ball, saw a steal of home, and saw the Sox sweep the Yanks in one of the greatest weekends in Fenway history. So...