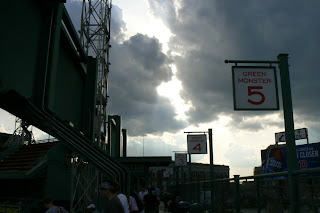 Sunday: On free meter day, I got one of the best spots, and went to the line to get on the Monster around 5:00. This pic doesn't capture how hot it was. I didn't get any balls up there, but then I went to the bleachers. Papi hit one to the camera well in dead center, where the ESPN camera man picked it up. I went over to him and asked if he gets to keep balls or if he gets to give them to lucky fans nearby.... 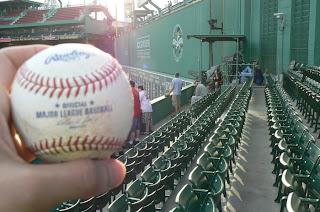 After messing with me for a few seconds, he said, "I don't need it," and flipped it to me. At that point, after two amazing wins and then getting a ball, I almost felt like I should just call it a weekend and pull a "good night, everybody!" Instead, I stayed and saw the SWEEP. (By the way, I took this pic after more fans showed up--when I got the ball, there were literally no other fans there.) 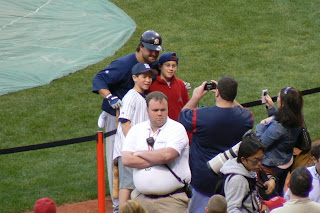 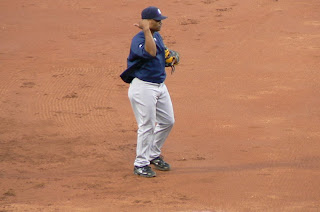 Cano calls himself out. 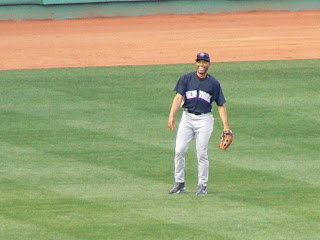 Mariano was laughing his ass off about something. 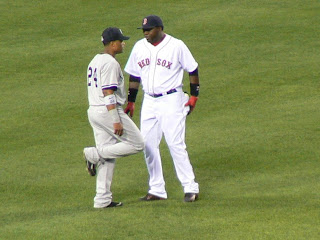 I hung out with Reb for a while on the third base side, as she was at this game, too. Here's Ortiz and Cano. 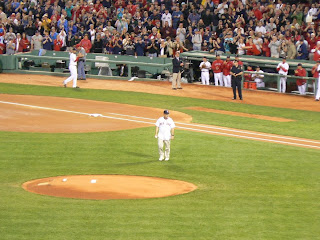 The captain of that ship with the pirates and whatnot--he's a longtime Sox fan who met his wife at Fenway. 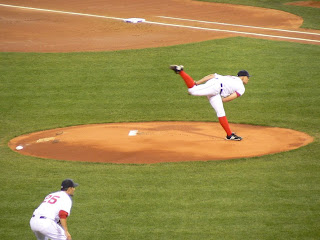 Masterson on the mound. He got the win. 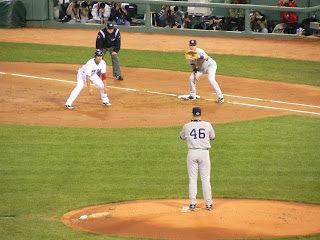 Jacoby on first. "Quick Recovery" Pettitte thinking of how he can come up with even more of a balk move. 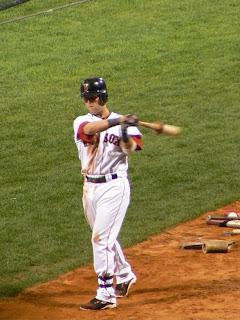 After a few innings I started wandering. Here's Pedroia on deck taken from behind the plate. 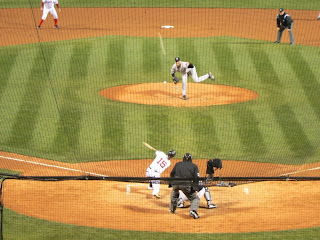 The under-screen view. Soon after this, Ellsbury stole home. It was amazing. On the first pitch of the at bat when he was on third, it was almost like he wasn't paying attention, only leaving third to get a lead as the pitch was about to be thrown. But maybe it was a ploy, because a few pitches later, he was bolting for home. What an applause he got for that sweet moment. I can't remember if I've ever seen a straight steal of home in person before this. 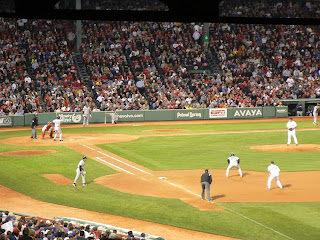 I was a little worried when Tito brought out the new guys with just a three-run lead. But it worked. Here's Hunter Jones. Now I'm way down the right field line. 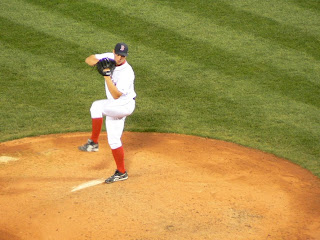 And now I'm in the pavilion seats--here's Michael Bowden. 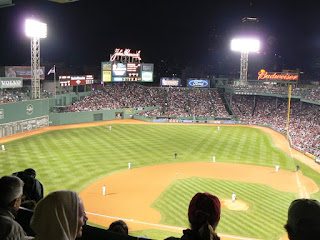 Night view from the pavilion. 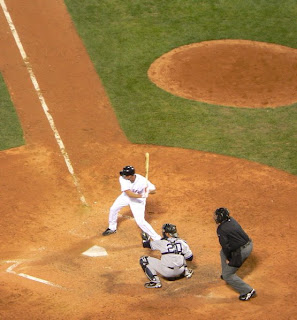 Jonathan Van Every at bat.

For the ninth, I went back out to right field, and got this shot of the dejected Yanks. Saito got the save, and Damon pinch-hit to make the last out--it's almost as if Girardi wanted to put a cherry on top of this great series for our sake. Thanks, guy! A crazy sweep, and ten in a row!

I will post more pics from Friday and Saturday later...

And I saw the I Like Baseball guy tonight! First of the year. But I couldn't get a good pic, or read the back of the sign, which surely is new material.

In the contest, the Marlins scored a run in the ninth, ruining their chance to get within two totals of the title. They lost to the Phillies, 13-2. That 13 put the Phils in a first place tie with Florida. Six other teams are tied for second (none of those are the Jays!), and the D-Backs are no longer in last, where they'd been by themselves recently.

Comments:
You probably haven't seen a straight steal of home in person, since there only seems to be about 1 every year these days, and the last time a sock did it was 15 years ago.

I looked this up, since I love these rare plays and apparently someone else stole home on Pettite 2 years ago! This time, after it happened he looked like he was going to puke. Or kill someone. It was glorious.

Notes to self: That spot I got was the closest to the Pike entrance. (I've been going Pike to 95 lately over the crappy 93.) I got out of the park quickly, got in the car--and the light was green right in front of me. I figured I'd wait for the next one, then have to wait for all the other cars that would be stacked up at the light, or maybe try to sneak ahead on the far right and get on the Pike. Instead, it stayed green long enough for me to pull out and go right onto the Pike. So I was on the highway literally within ten seconds of ARRIVING at my car. One of my best getaways ever.

The cameraman who gave me the ball is in the shot of the ball, forgot to mention that. He's the one closer to the field. Worked for ESPN.