Part 1 is here. Now we move on to the game itself: 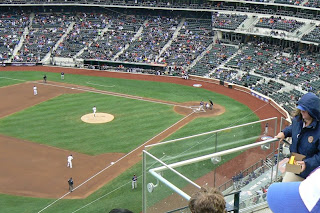 The first pitch of a Red Sox game for me in 2009--Oliver Perez pitches to Rocco Baldelli. One major design flaw at Citi Field: See that lady at the right? Guess where she--and everyone else coming into the section--is gonna stand for ten seconds with a dumb look on her face trying to figure out where her seat is? Yup, right on that little landing between me and home plate. They have this in front of each section of the upper deck. The glass itself is bad enough, blocking my view of the Sox dugout/on deck hitters, just imagine when people are standing there--and that also includes people who go to just stand in that spot to take pictures. I did like how the seats were slightly angled toward the plate within the section. 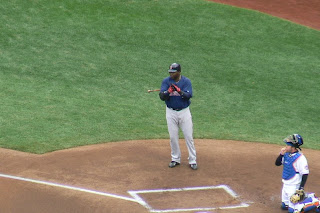 Papi at bat. Here's my biggest complaint about this park, which overall was better than Yankee Stadium and of course far better than Shea: I couldn't hear ANYTHING coming out of the PA. After hearing smatterings of applause, we finally figured out that they were announcing the lineups. A few times I listened very closely and was able to hear a hitter announced. When we got downstairs to better seats later in the game, I was surprised that the sound was still pretty bad from down there. They need to do some serious speaker re-aiming. 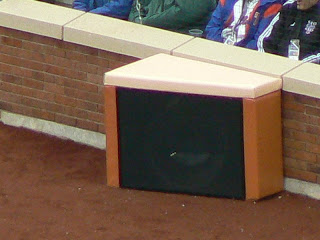 A close-up of one of the speakers (?) behind home plate. Anybody know why these are here? So the batters can hear their on deck music? So the anthem singer can hear him/herself? Put those things in the upper deck where we need 'em! (And where catchers can't end their career by smashing into them.) 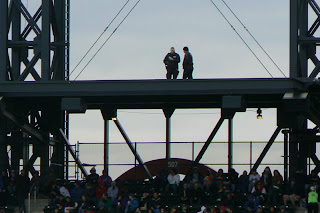 We saw a similar crew to the night before's sniper brigade at Yankee Stadium, aka Ode To Toilet--here are a few of them on the roof. 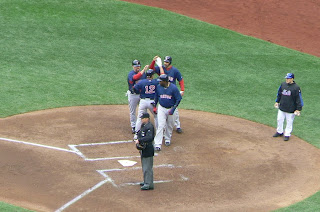 Jed Lowrie with a grand slam, the first home run at Citi Field. Perez was horrible and got taken out in the first inning. 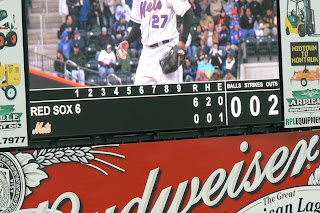 Thanks to all the walks, the Sox had six runs on two hits. 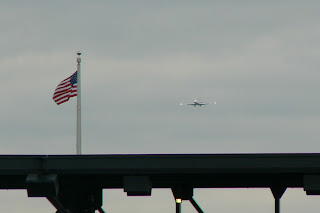 The plane-watching is even better than at Shea--we saw a lot of Deltas and AAs and Aer Linguses approaching LGA. 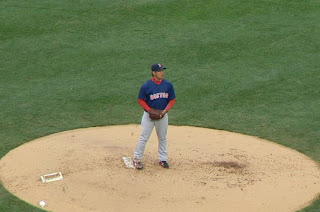 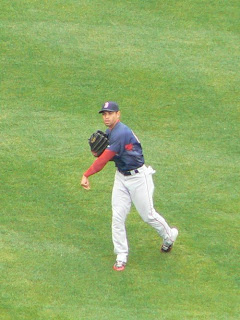 Ellsbury came into the game after a few innings. 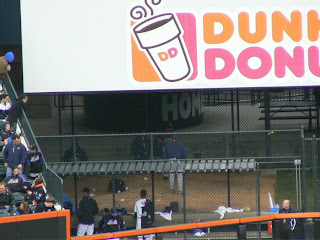 I noticed from our seats that people were walking behind the bullpens. (And also that that must be where the "old" apple was, as I could see the hat with "HOME RUN" on it. That's where I wanted to go. After Jim came back from visiting a relative in the good seats, he told us nobody was guarding the field seats. So we headed to that bullpen area before looking for a seat upgrade. 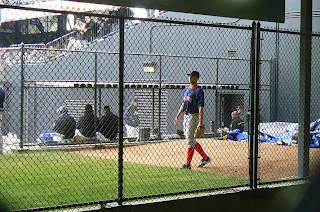 Here's the view from behind the bullpens. The Mets' one is in front of the visitors', so if you're going to see your team play at Citi, go back here to see your team's pitchers. There are two fences between you and them, but it's still really cool. Here's Justin Masterson. 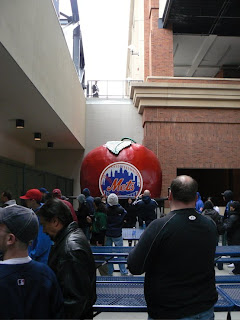 Looking to my right from that same spot, the old apple. 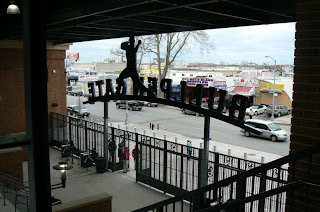 Looking out to the street from inside the Bullpen Gate. This is the back, un-spiffy, side of the stadium. 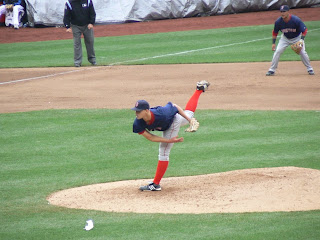 And as we arrive in the good seats (they were only blocking the theater-style seats right behind home), Masterson arrives on the mound. 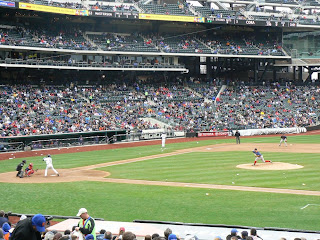 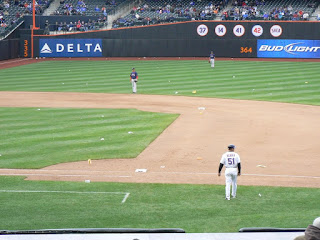 I hate wind the way some people hate...other people. It turns a 55-degree day into arctic winter. And puts garbage all over the field. Note Luis Alicea, now the Mets' first base coach. 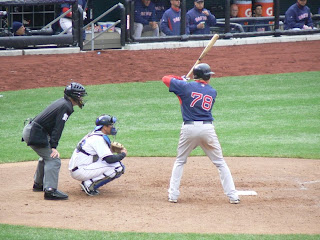 Now the young'ns are in. Above, Lars Anderson. 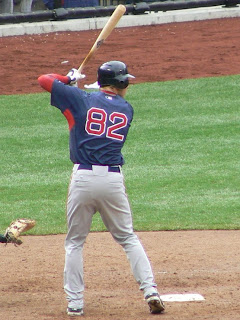 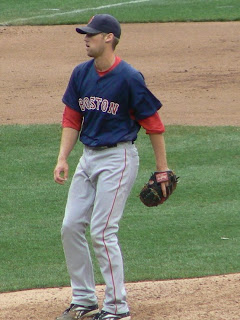 Daniel Bard on the mound. 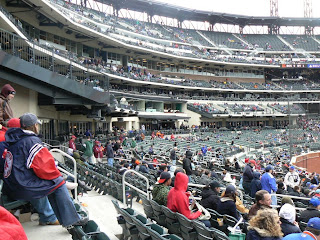 The fancy seats behind home plate. There were so many empty seats for this game and Yanks-Cubs the night before. I don't know why people weren't more excited about thee games. But I do have a feeling if tickets were easier to get, more seats would've been filled. Instead, brokers buy up all the seats which were sold cheaply by the team (I paid 6 bucks for this game and ONE the night before), and put them on sale for ridiculous prices, and then nobody buys them. This is going to be more noticeable this year in the bad economy. 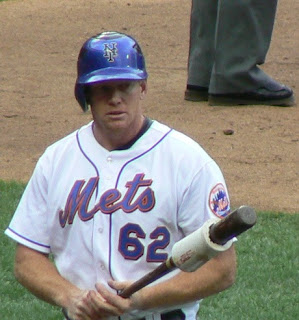 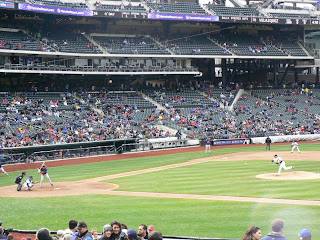 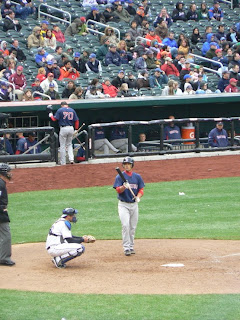 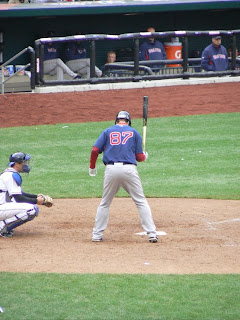 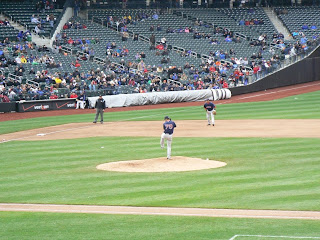 The Red Sox won, 9-3. I liked Citi Field. The whole "weird outfield wall" thing gives it so much more personality than the very static Yankee Stadium. The walkways underneath felt lived in, as opposed to Yankee Stadium's museum-like quality. The only downside is that they were very crowded, and this was a sparsely attended game. I didn't even bother getting food at either park--it's all just too expensive. I'd rather have a big meal before or after. But I think Mets fans finally have a nice place to watch a game, and they should be happy that their place beats Yankee Stadium easily.

Comments:
Yankee Stadium III-is it Toilet III or a mausoleum instead of Museum?

Citi Field has more to do for a Fun Atmosphere;

NOT The Case for Toilet III;

Kiddie Field in RF, is Cool.