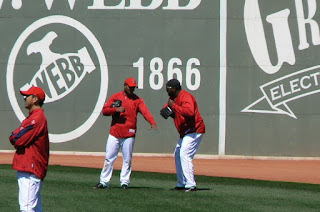 Sunday = free meters. Yet the $40 lots are still full. Go figure. Anyway, after I paid my 0 dollars to park a few minutes away, I headed to Lansdowne Street to meet Mike, my friend since middle school who hasn't been to Fenway since '97. He's also a Yankee fan. We had one crappy ticket, while the other waited for us at will call. So we had a problem--how could we get to the Monster Seats (with my RSN card--they allow you to bring a guest), which open 2.5 hours before the game, when we couldn't get our ticket from will call until 2 hours before the game? I asked the grumpy old man at Gate C about it, and wasn't really sure how that could work--but he solved our problem by telling us there was no batting practice anyway, which we thought might happen with the day game after a night game. So we decided against even trying to get to the Monster Seats, and just went to will call, waiting for 11:35. At that point, I got our second ticket, and we headed in...to see the Red Sox taking BP! That guy lied to us! I mean, I would expect your average fan to say the same thing he said: "no BP after a night game, they're all hung over!" But I wouldn't take it as gospel unless the guy worked for the team. Like this guy. Terrible job by him.

We walked all around the park so Mike could see all the new stuff, and we finally decided to go to the standing room behind the right field roof boxes. The game was about to start, and we were psyched to have a sunny spot. It was a classic Fenway day where the people in the sun have a whole different experience from those shivering under cover. Then we got kicked out. I knew being up there might not be allowed without a ticket--but I didn't think they'd actually check once we were in there. So now we were slightly screwed, what with all the standing spots taken downstairs. It was either look over people's heads in the cold, or, take another risk and sit in great seats in the sun, hoping the real ticket-holders of those seats don't show up. (Because as has always been the official Fenway unwritten rule, you can sit almost anywhere downstairs--you just have to politely leave when the real people arrive.) We chose the latter.

It was nervous-time for the first inning, as a steady stream of people was still coming down the aisle. Finally enough people entered our row so that we had to leave, but we had coverage in front and in back, so we hopped a row into new seats. We were still on edge until about the end of the fourth. That's when we pretty much knew we were gold, and it turns out we were. Sweet, close seats for 60 dollars less than face value, and with free parking, and the food bought during the family hour. In other words, gold.

Lester was on and the game went by quickly. Lowell and Pedroia knocked in runs, and that was all we needed, even though Saito gave one back in the ninth.

We also watched the scoreboard, of course--I see now that the Yanks win was aided by a Jeffrey Maier play--funny, they built the new stadium with seats right up against the fence, forgetting about how they'd had the problem before. Terrible job. But it seems like there will be so many homers there, that the Yanks will get their fair share of screwage, too.

And the poor Oakland fans at Fenway! Okay, maybe there weren't any there, but if there were, they were probably happy to see the board showing all day that they had a 1-0 lead over Toronto. Game went final, score remains 1-0. Oakland. Turns out Oakland had actually lost 1-0! TJ by the people in charge.

Timlin threw out the first pitch, and Elmo was at the game, but I didn't get good shots of those. I didn't check into that Kapstein seat, either, so I'll do it next time. 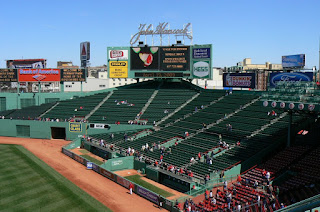 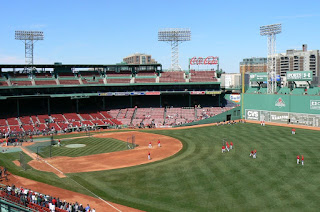 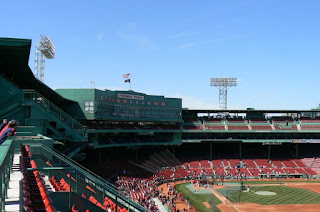 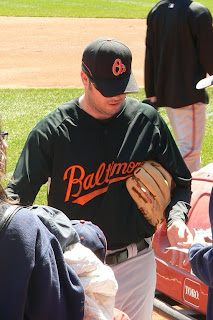 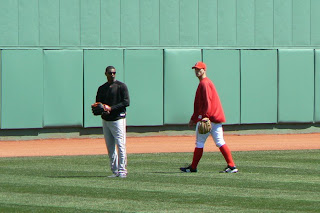 Adam Jones (the baseball player, not the guitar player for Tool) and tomorrow's starter, Justin Masterson. 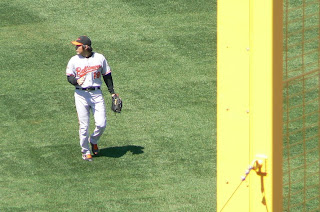 O's starter Uehara, who was hit fairly hard but didn't give up much on this day. At right, Pole of Pesky. 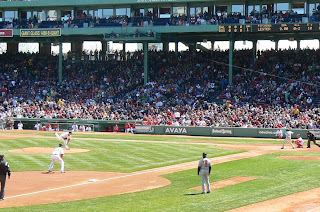 Now down in the good seats, Lester delivers. 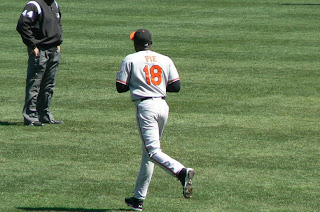 You want a piece of me?? --Allan Wood 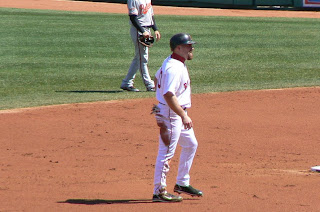 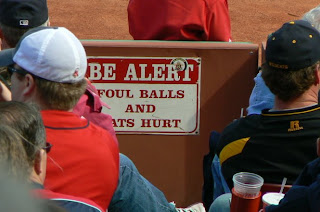 Being blunt about it. 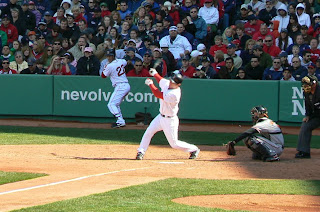 Kottaras at the plate. I've got a lahhhhhtta games coming up, so watch for more pics and stuff.

Added to post: Mike and I on TV, on the Orioles' feed: 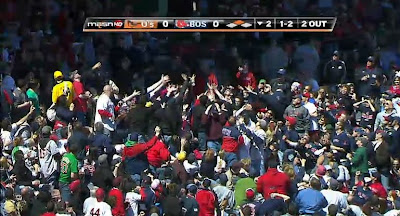 Bottom left you see a green Youk shirt. Look up and to the left of him, and that's me in my Pedroia (15) jersey, with patented blue hood and sleeves underneath. And to the left of me, seated in blue, is Mike.

Yes, and when I told Kim, she laughed her ass off too.

It was a classic Fenway day where the people in the sun have a whole different experience from those shivering under cover.My sister went to that game with her boyfriend with seats apparently in the vicinity of where I was sitting which were in the shade yesterday. The latter. Funny because I asked her if she had a good time and she complained it was so cold.

Yeah, it was funny, we might have just settled for SRO, but it was worth the risk to sit in other people's seats (while losing even more of a chance to get a good SRO spot) just to be in the sun.

I did the RSN BP thing Sunday, and the guy at the gate was half-right. The O's skipped taking BP, so the Sox batted in the later time slot... after the gates opened and they kicked the RSN people off the Monster.

(I had tried on the Thursday of the TB series too, when neither team took BP. I haven't watched this much long-toss since Ft. Myers!)

Yeah, I spotted myself in your panoramic pic from the Monster that day. I'm alone in the bleachers near the top of section 40--but I just look like a blob.

Thanks for the info--come to think of it, I kept thinking the Sox BP was on the verge of ending, but it went on and on--and the O's never started. Makes sense that Papi was in the outfield right when gates opened.