I already showed you the outside of the new place--tonight I went inside for its first game ever. Click each pic to enlarge: 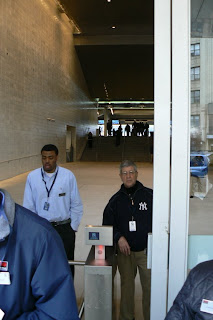 I went with Jim and Chan, each of whom I've known for almost 20 years--both Yankee fans. My plan to go in through the out-of-the-way Gate 2 worked, as we were the first ones in, despite getting there ten minutes before gates opened (4:00 for a 7:10 start). I gave Jim the nod as first person to enter the stadium for a game in history--it was funny listening to the workers quibble before they let us, still wondering how this was gonna work themselves. 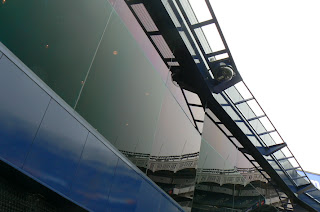 We got in and had hours to walk around. We started in left, and then headed to Monument Park--this is the view looking up from there at the batter's eye cafe--yes, there are people eating fancy food behind that tinted glass. When we left Monument Park, we saw the line had become hundreds of people long--we hadn't waited at all. I never went to M.P. at the old place--but it was what I expected, and it also gave us a feel of the way the new stadium works: in a rigid, robotic manner, as we were herded past each monument. 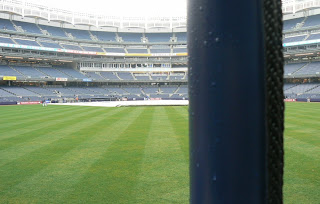 The view from the pole in exact center field. 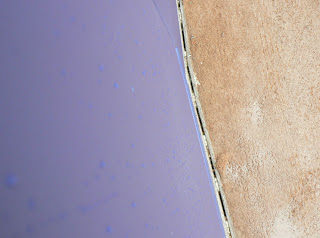 Looking down the wall at the warning track. 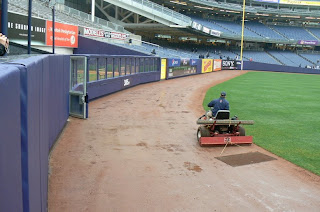 Looking to the left toward right field. 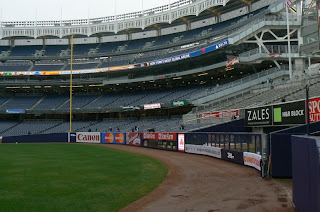 Looking to the right toward left field. 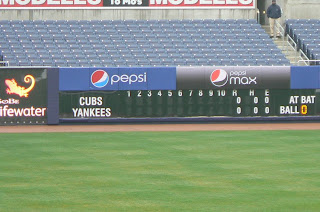 One of the two manual scoreboards. 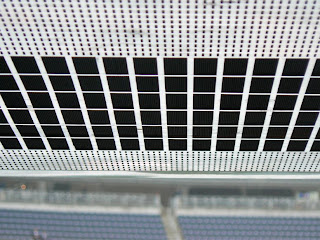 The ceiling of the lower deck with outfield seats in the background. 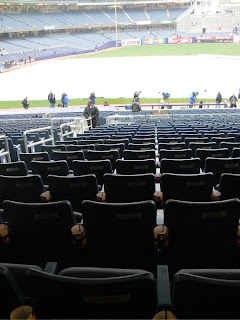 The field from the top of the lower level. This is as close to the field you can get without a ticket. I gotta figure if they'd had batting practice, they would have let us go down to the fences--but even three hours before an exhibition game, it was: go where your ticket says and nowhere else. 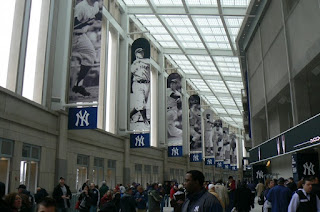 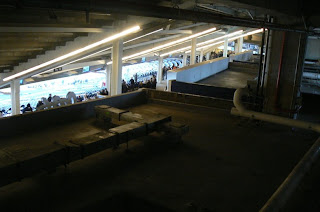 Going up stairs to the higher levels, you see this. 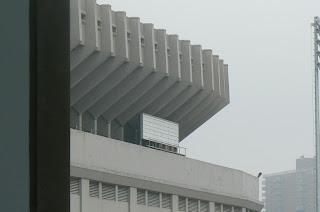 Looking over at the old stadium, I noticed that message board was blank.... 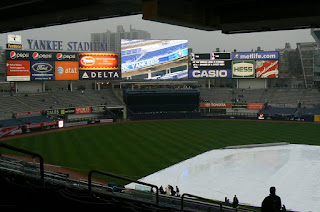 The field. That huge, hi-def scoreboard is re-goddamn-diculous. 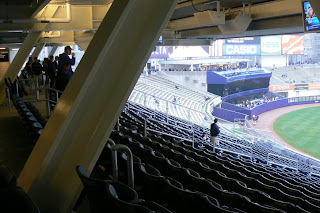 Angles in the outfield. 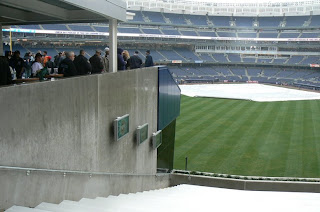 You've probably heard about the obstructed bleacher seats. They are VERY obstructed--from that seat at the far left in the back row, you can literally only see half the field. They have TVs on that wall--but during this game, at least, those only showed what the scoreboard showed--not the game. If you do have those seats, I suggest going right up on top of the very thing that's in your way--the landing atop the batter's eye cafe--to watch the game, if you don't mind standing. 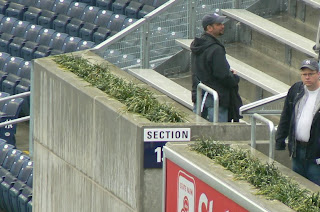 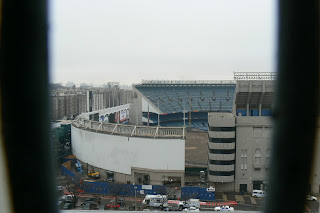 Finally, we're at our seats in the last row of the upper deck, which they now call grandstand. One dollar and ten cents each on this night only, same as they cost in 1923 when the original stadium opened. Looking out behind us, the old stadium. Look closely, the field is gone... 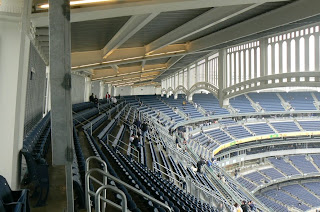 Looking to our left toward home plate. We were under cover on this rainy yet comfortable night. Note the new facade or frieze or whatever you wanna call it. 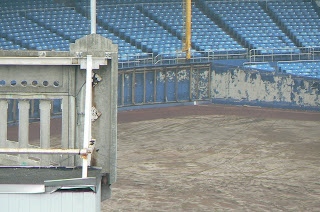 Looking back over at the old stadium, I noticed that the padding on the fences is also gone. 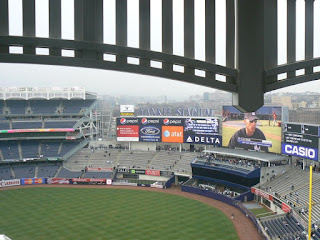 View from behind the frieze. 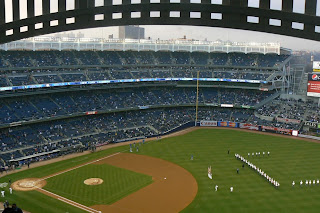 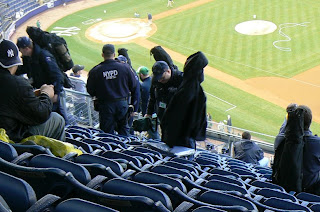 Suddenly this special...unit was right near us. There were a dozen of 'em, each with gigantic bags. We didn't figure out that they were snipers until... 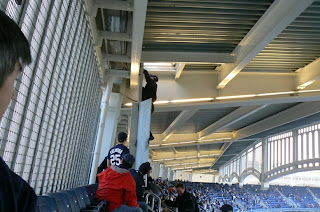 They started climbing onto the roof! 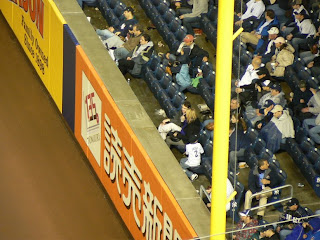 Top of the right field wall by the pole. We actually saw a home run hit each foul pole in this game. 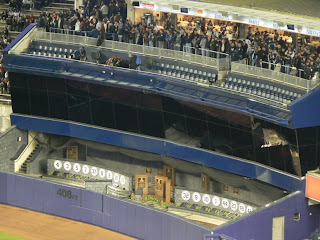 The center field area, with the batter's eye cafe and the landing above it, and Monument Park below. 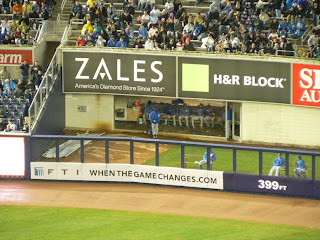 In the Cubs bullpen, you can see where the pitchers sit behind glass. The Yanks bullpen has been moved back over to right field. 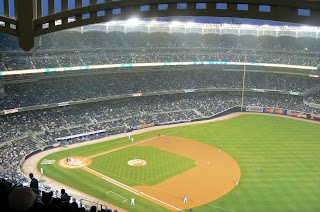 Night has fallen, and the game is on. 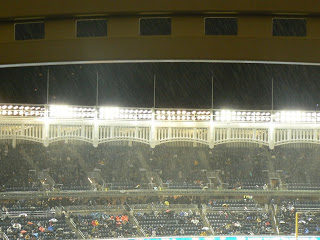 And rain is falling. 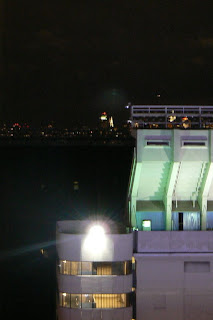 It was too foggy before, but now you can see Manhattan's skyline peeking over the old stadium, which is unlit inside. 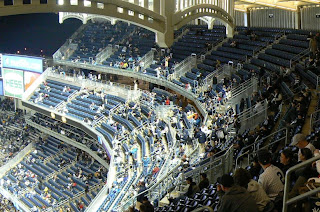 The scene in the right field grandstand in the ninth inning.

The crowd was uninspired. Maybe it was the rain, the fact that it didn't count, or just a feeling of not knowing what to do yet, but the whole night was pretty low-key. Lots of workers either standing around with nothing to do, or greeting you even though you've already been greeted. And lots of seemingly wasted space. The whole thing felt almost like we were touring the place on a non-game day. But that's what happens when you get to a game three hours early. The game itself was the definition of an afterthought. A lot of seats were never filled, and lots of people left early. Come to think of it, I hadn't been to a Yankee Stadium game where the Red Sox weren't the opponent in years--maybe this is just what the place is like without that buzz in the crowd. Nobody seemed to notice my Sox hat.

I definitely had fun with my two friends who I don't get to see very often--Jim knows *almost* all of the World Series matchups, so we quizzed each other all night between classic high school era stories. And it was still a baseball game, which is always a good thing, but I think all three of us had an overall "meh" feeling about the night. The snipers really capped off the whole experience: get too excited, and we'll shoot your ass. The place is like a billion dollar toy you're not allowed to unwrap. I'll probably get back there at some point, but I won't be rushing--I just wanted to see the place, and now I have.

I have to get up in a few hours--Red Sox-Mets at Citi Field! Another rainy one, but at the very least I know I'll be seeing the Red Sox, so it should be a fun day with the same trio, plus John Quinn--and I know some other e-pals will be there, too. So...more pics to come....plus some cool video I shot tonight