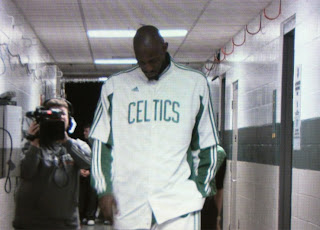 Got the $10 seats at the Garden--which are in the locker room! Actually, this is a shot of the scoreboard, showing Garnett coming to the floor after being out for a month. 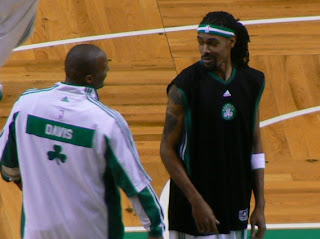 Here's the real view, from way up in the upper deck. Here, my boy Mikki Moore laughs with Infante Grande. 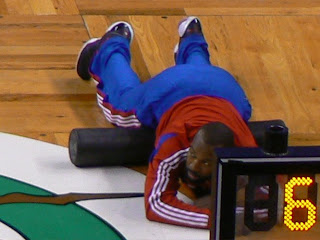 A Clipper doing something. 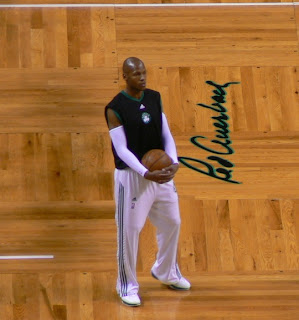 Did you know the Clippers have a logo on their butts? 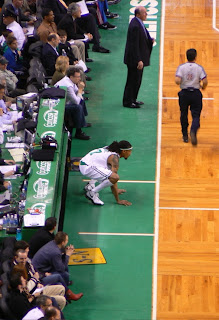 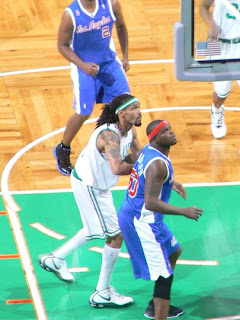 Someone else's flash went off right as I took this, helping my shot immensely. Mikki wasn't so hot on this night. He had five fouls. And way fewer points than five. I predicted the Celts would win by 17--they won by 13. 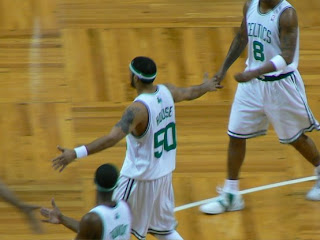 Kim's favorite, Eddie House, flanked by Marbury and the amazing Rondo. By the way, the three people in front of us wore Laker garb and rooted for the Clippers. 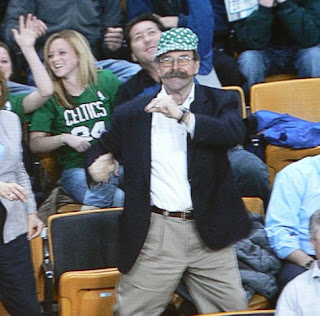 Another scoreboard shot of some guy in the crowd.

Highlights of the night: A guy named Jerry Smith sung the anthem! I wish I'd been taping, because it was cool to hear "ladies and gentlemen, Jere Smith!" over the PA. At halftime, they had a game between two Special Olympics teams. This one kid came right out and shot an NBA three, and nailed it. He came back down the next time, and repeated the feat, as the crowd went nuts. The third time, the ball bounced around...and in! At this point I was thinking I might hear about this on the news. He missed his fourth try, but he still electrified the crowd.

Lowlight: I got a "tub of fries," and after taking one bite, I almost barfed. Disgusting fries. Fries have to be pretty bad for me to buy four dollars and fifty cents worth and literally throw them all in the garbage. But wait, there's more: After eating that only fry, I looked down at them and saw a [I'll leave out adjectives that might provide you with a mental picture of its length or curliness] HAIR. So any chance I had of maybe nibbling on them or dousing them in ketchup to disguise the rotten taste went right out the window.