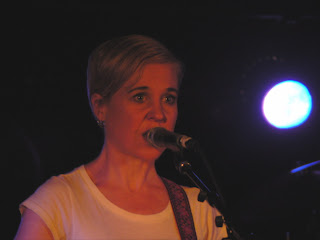 I was never really into Throwing Muses back in the 90s (or '80), but only because I didn't hear too much of them. I got hooked on Kristin Hersh, one of the band's sing-writers (I'm done typing out "singer/songwriter"), after I saw her perform solo acoustic in my hometown of Ridgefield, CT, in 2002. Last night she played with her original band, on top of a set with her latest one, 50 Foot Wave, to a sold-out Middle East Downstairs in Cambridge, Mass. 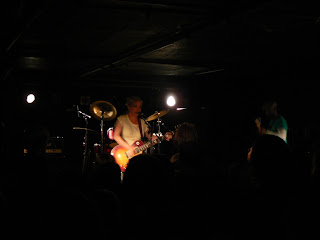 It was like Hersh Heaven, getting to see her play in one band, then take the stage again with another. I thought the third band on the bill, Screaming Females, might play in the middle to give Kristin (and her bass player, who also plays in both TM and 50FW) a break, but they opened the show instead. 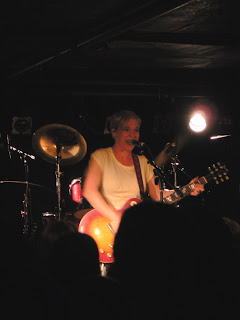 I'd seen 50 Foot Wave before, and they were just as good this time as last time. This band is Kristin's chance to kick some serious butt on stage, which she and they did. The new songs were pretty good, even if they did them in medley form, for some reason. And the old Throwing Muses tunes made me want to go back and get some of their stuff. Whatever Kristin does, though, I'm usually both mesmer- and paralyzed by it. I don't know how she does it. If I sang one song in the style she sings most of hers, my voice would be shot for a month. And she's an incredibly gifted guitar player--but that wouldn't matter if she couldn't write the incredible songs she does. Some people have to pretend to be weird or "in the zone" on stage, but Kristin is the real deal. You know how your mom used to tell you not to bother the cat while he's eating? Same deal here--Kristin seems to be a friendly and engaging person, but I think if you were to interrupt her while she was playing a song, the demon that's taken over her body would tear your throat out if it noticed you at all.

Very hard to get good shots in this place. The bands were backlit, with one spotlight in the front, sadly angled at the players' mid-sections. I did my best. SOme of these are Hersh with Throwing Muses, some are 50 Foot Wave. I can't even tell because she was directly in front of the drummer, who was the one member of the lineup that was different in each band. The following are some bad shots that I messed with: 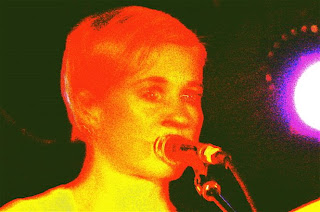 Hersh in the proverbial zone. 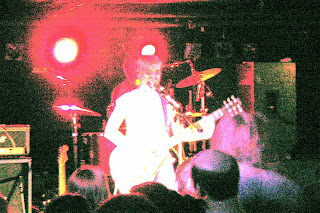 Hersh screaming her head off.

The opening band was surprisingly good. When I first listened to Screaming Females, I felt like Nelson Munz after he saw Naked Lunch--there was hardly any screaming or females. But there is one female, and she often screams. Regardless of that, their set was great. Usually you only notice the bass player when they're screwing up, but this dude was the opposite, to the point where I'd actually purposely focus on him sometimes. But that was hard to do, because it meant taking your eyes off the singer/guitarist--she's a really good guitar player, but kept any wank-a-riffic parts to a minimum. And at first I kind of thought the screaming was overdoing it, especially considering the band name, but after I while I got used to her style. She can do these screams that blend right back into her normal singing. At one point, right at the transition, I looked over at the bass player, thinking a different person had started singing, but it was still her. Totally rockin' songs, with just enough of the "noise" element for my taste. Some of that noise crap is just that. I'm down with noise in music--not a big fan when it's just...some people making noise. I mean, there are some kids making noise outside my house right now, should we sign them? Or tell them to shut the hell up? You know what I'm talkin' about. Below, the one shot I got of the singer of New Jersey's Screaming Females: 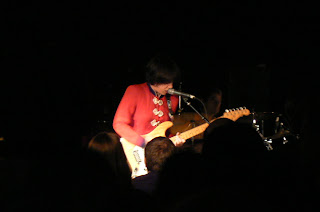 How did I not know about this show? Like the Muses, love Kristin Hersh, and thought that Screaming females was 'my' underground find.

Lucky you for catching this show.