Two weeks ago, Billy Werber, then the oldest living Major League Baseball player, died at 100. I wondered who became the "new" oldest. Using retrosheet.com, I found out it was Tony Malinosky, who played during one season in the 1930s. This was confirmed in a few articles about Werber, though they only gave Malinosky a brief mention. I decided to track down Tony for an interview.


Tony Malinosky is 99 years old. He lives in Oxnard, California, far from his birthplace of Collinsville, Illinois, and even farther from Brooklyn, New York, where he proudly wore a Dodgers uniform in 1937 as a 27-year old infielder.

He didn't set any records in the 35 games he appeared in over 70 years ago, but now he's number one. And though he's "not excited" about being the oldest living person to have played in the majors, he's well aware of his title. A fan in San Antonio called him to break the news--the first of many congratulatory calls.

Tony grew up a Yankee fan, but it was the Pittsburgh Pirates who first gave him a contract, in 1933. After his all-star 1936 season with the Louisville Colonels, the Brooklyn Dodgers purchased his contract, and soon he was down in Clearwater, Florida, preparing for the '37 campaign. His manager at Louisville, Burleigh Grimes, had become the Dodgers' skipper. One of the first moves "Old Stubblebeard" made was to get Malinosky to be his shortstop. 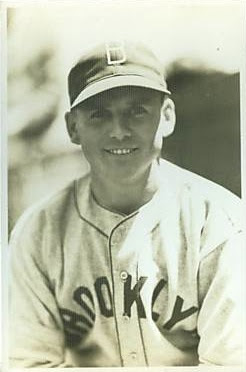 Tony's time with the big club lasted until August. He was traded to St. Louis but never played big league ball again, due to an injury he suffered in a game against Cincinnati. But he played with minor league clubs across the country. "Birmingham, Louisville, Houston, Sacramento, Little Rock, and Tulsa were some of the places I played," Tony told me.

While with the Dodgers, Malinosky shared a clubhouse with two future Hall of Famers, Waite Hoyt and Heinie Manush. He called them "very good players--intense competitors." He also faced a few legends, including Dizzy Dean. But the toughest pitcher he hit against, he says, was longtime Giant and 253-game winner, Carl Hubbell.

Before his baseball career, Tony attended Whittier College in California. Richard Nixon was a classmate. I asked Tony if he knew the future president. "Yes, I knew him, [but] I only saw him one time after he became president." Not too many people can claim to be colleagues with presidents or Hall of Famers. Tony can--with both.

After baseball, Tony was drafted into the Army. He saw action in Europe in World War II, serving with the ETO, and was in the Battle of the Bulge. After the war, he worked for North American Aviation, building fighter planes. He and his wife Viola ("Vi") then owned and operated a trailer park in Twentynine Palms, California for 16 years. After selling it, they spent two years traveling all over the United States, Canada, and Mexico. In 1977, they settled at southern California's Oxnard Shores Mobile Home Park, where Tony still resides. Vi, his wife of 64 years, passed away ten years ago today.

He doesn't root for any particular team now, though he still follows the Dodgers. Sadly, his baseball buddies are all gone. "Leo Nonnenkamp was the last one of my true baseball friends to go." Leo, also known as Red, lived in Little Rock and played outfield for the Red Sox in the late 1930s. He died in 2000.

Tony's shining baseball moment? "Being a big leaguer and being able to play with and against the greatest baseball players." He also confirmed for me that Ebbets Field was as wonderful as I've heard it to be.

Tony Malinosky turns 100 on October 5th. The final day of baseball's regular season is Sunday, October 4th, and the Los Angeles Dodgers play at home that day. I can't think of a better time for the team to invite Tony down from Oxnard for a special celebration. How about it, Dodgers? I'll even send you the 100 candles myself.

[It should be noted that Emilio Navarro, age 103, is currently the oldest living player from the Negro Leagues.]

Comments:
Great idea, and a fantastic post, Jere. I love that picture, too; I think that was the only year that the Dodgers wore uniforms with green trim instead of blue for some strange reason. He sounds like a very nice man; I would imagine it would feel a little strange to get congratulated for essentially outlasting all of his contemporaries. I hope the Dodgers do something for him this season. My father is another Tony who also happened to see action in the Battle of the Bulge, although he's 16 years younger.

Thanks! It was fun to do. I know the year after he played was the year they switched to the Dodgers in script they still use today. There's basically one other picture of Tony online, and he's wearing a more ornate BROOKLYN uni, which I think was from the previous season, so it must've been in use in spring training '37.

Kim's grandfather was also in the Battle of the Bulge. I guess it's probably more likely he knows your father than either of them knowing Tony.

that was really cool, thanks Jere.

How very nice of you to publish your interview of this man. Yes, I think the Dodgers should bring him down and make some kind of fuss over him.

Thanks. Well, Tony died in 2011. But the Dodgers did bring him down for his 100th. I wonder if they saw this and were inspired! I hope so.