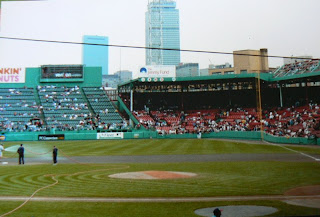 I've got lots of pictures from games in the pre-blogging days, but I just happened to find this set of pics yesterday so I'll throw it up here now.

It was a Sunday in April of 2000, and I had just moved out of the house I lived in my whole life except for college, to Danbury, a town away, where I got a place with Brian. I dragged my future roommate and friend-since-high school Chan up to Fenway in an attempt to make him a Sox fan. He had come to this country about ten years earlier, and another friend of mine, a Yankee fan, "got to him first," as Chan tells it. My attempt to sway him to the good side failed. But at least he got to see Fenway Park.

In the above pic, I was convinced the light tower was taller than it is now--until I realized we just see less of it with the right field roof section that's there now. 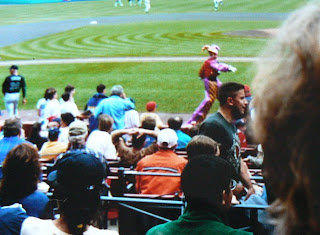 There seems to be a jester on the field here. Note that these are pictures of pictures. 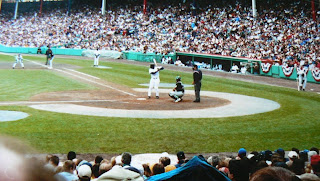 My then-fave, Carl Everett, at the plate. You can see how the poles were painted red, white, and blue then. 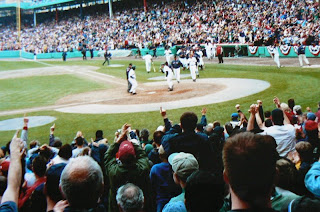 And Crazy Carl would hit a walkoff dong to lead off the ninth! Varitek is the first to greet him. 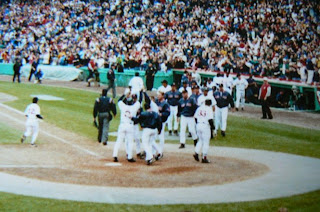 What's taking everybody so long to greet Carl? 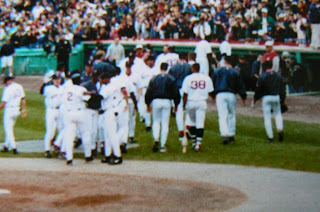 Check out the blue stripe showing on Wilton Veras' stirrups (#38). This was toward the very end of the stripe's life, as well as the stirrups themselves.

Replay of Carl's blast on the scoreboard. 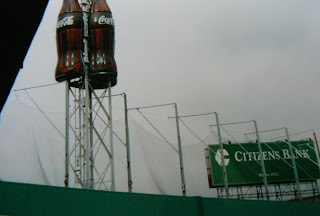 The Coke bottles when they were just plain Coca-Cola. 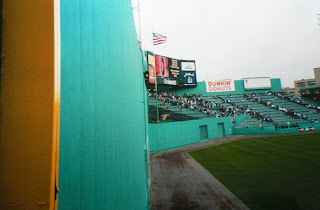 From the left field corner. I must've been taking Chan out to touch the Monster. 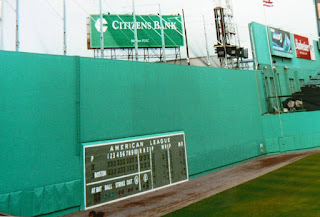 The Green Monster in 2000. Can you believe this shot is from this decade? (Boxscore from that day here.)

On our way back from Boston, we stopped in Meriden, CT at my nana's house. She had just died--she was born in the year of the first World Series--and I was getting shots of the house that I spent so many Thanksgivings in before it was sold. Specifically the little closet that we all used to decorate with graffiti. Here's me in there: 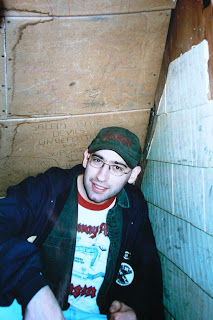 It was cold that day, as the pictures show. I had a flannel shirt with a Fenway Park shirt over it, and another long sleeve shirt on top of those, and then my jacket (with Pac-Men pin.) The ultimate piece of graffiti, the one all others aspired to match, was my cousin Amy's (Nora's?) enthusiastic boasting of her high school's undefeated season and "Super Bowl" championship. I would do things like write "Jere 1981" in 1992. You can also see the classic "Kara + [crossed out]"-style items up there, too. I know I shot video of this, along with the entire house. I gotta find that....

Comments:
Awesome pic from Nana's house! I think I may have written the football thing, which is pretty ridiculous because, to this day I have ZERO knowledge of or interest in football. Teenagers are so goofy!