For Xmas, I'll give you some snowy shots. Then we'll get back to December baseball. Click to enlarge. 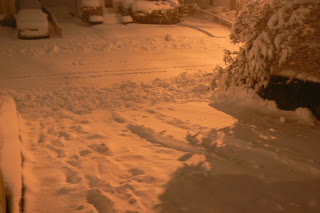 From the night of the first big snow of '08-'09 and first at our new house in Providence. They never did fully plow our street, but the rain has washed much of the sheet of ice away. 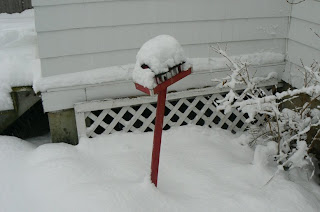 The next day, snow on the birdhouse. 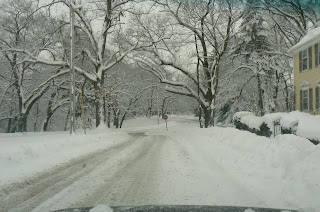 I love getting shots with one little but a of color. "Stop sign in snow" is the perfect example. 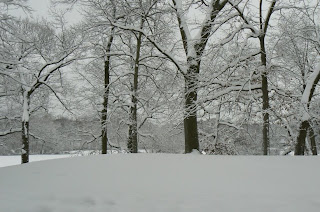 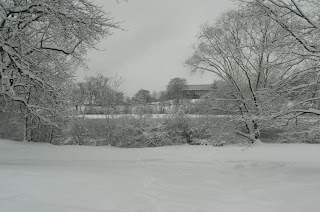 More of the snowy park. You can see the greenhouse on the hill. 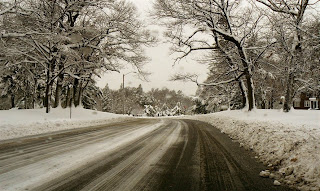 "Yield sign in snow" gives the same effect I described above. I messed with this picture to try to make it look cooler--I always fear I should've just gone with the original... 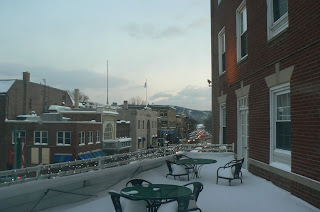 On Monday we went to Northampton and stayed overnight--at Hotel Northampton. We see it every time we go there, so we finally decided to stay there. It was nice--would be nicer in the summer, though, since it's go the balcony, and our room had a separate, unheated room attached to it. Here's the view of downtown. Calvin Theater at left, some hill way out there. 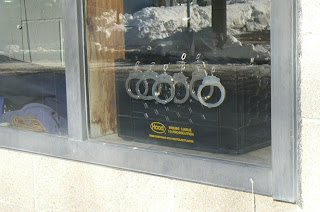 Had to get a shot of the handcuffs in the courthouse window. 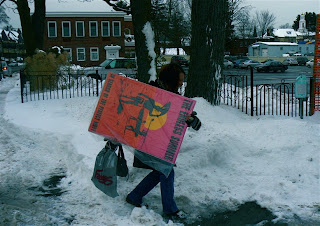 This girl was walking through the snow with a summer-y poster. Okay, that's really Kim and it's a posed shot. She bought me this Endless Summer poster for Xmas, and I realized as she was carrying it through the snow what a good shot it could be. Would've been even cooler if she'd just bought me an actual surfboard.

It was while we were hanging out in Northampton when we found out about the slime signing Teixeira, hence not much posting here while it was going down. Is it possible that while we were away, the cats were looking at themselves in the mirror? See paw prints below. 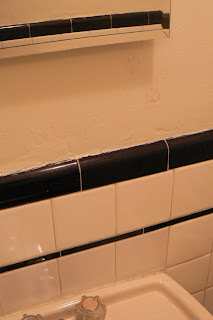 Comments:
The "yield sign in snow" pic is simply stunning. Great job. Merry Christmas to you, Kim and your families.

Thanks. And to answer question from the other day, yes, we should get a pitcher, and I think it would be cool to get Lowe back here. We'll see.

In the category of "Really Late Comments on a Post":

My sister went to Smith in the mid-70's. I haven't been back to Northampton in over 20 years. But I'm pretty sure that the Calvin Theatre is where we saw Rocky back in 1976.

I figured that you would enjoy that tidbit.

In the category of "You Call THAT Late," I'm here 12 years later in a pandemic to say-- Ha, I did enjoy that tidbit, and relating to that AND Xmas presents between Kim and I, I JUST wrapped some of her presents, including a Rocky-related one!!! And it says 1976 on it! It's a Mighty Mick's Gym t-shirt. Don't tell her.

(And we've been to Northampton at least yearly since then. (Last time was the month before the pandemic started.) Have you been back yet?

Might comment on this post every Xmas now. Pandemic still a-brewin'. Omicron. Tested negative this morning to go to Kim's family's dinner. Heading to Northampton in a couple of months. Have gotten back there since pando--this past July 3rd.