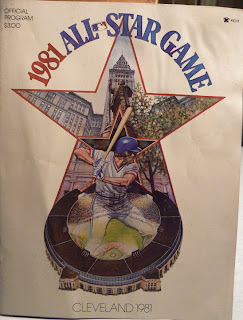 I got this and the '80 World Series program on ebay a while ago when I saw that they each had articles about the fledgling Baseball Bunch. Some pretty good stuff in here. Click to enlarge.

Here's the logo. (By the way, I don't bother with scanning--it's so much easier to take a picture of a picture. But the downside is you get glare or blurriness sometimes.) 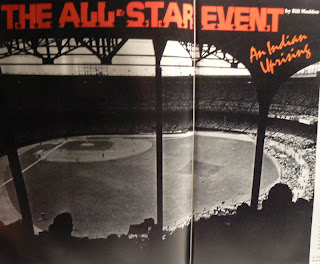 I like this big shot of a full Municipal Stadium. 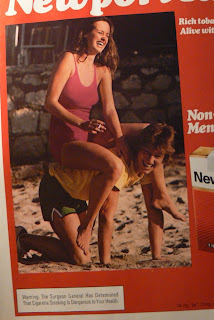 Do you think this is just one horse/rider team in a race? Or is this just what these two were into? Remember, always "horse around" with a lit cig in your hand. 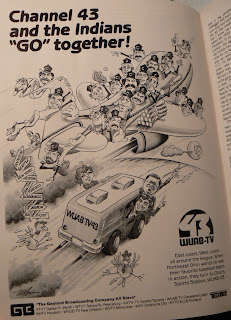 Joe Castiglione worked in Cleveland around this time but his name didn't make it into any of the local ads. This station went all out with the artwork, eh? Let's take a closer look at that sign:

Where's Detroit? And Minny? They've got Arlington in there. Maybe the artist was thinking there were still 12 teams in the AL at the time of the drawing and only made a 12-sign pole, and then filled in the cities, leaving two out. Still, if you're gonna leave two out, I'd have left out the two teams that entered the league four years earlier, Seattle and Toronto. 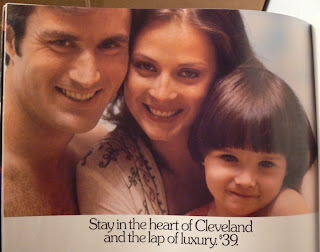 Apparently this hotel is trying to attract nude families. 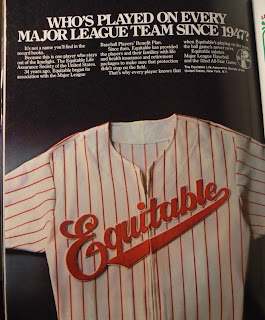 So this company decides to use a jersey for their ad. In '81, the popular style was still the pullover vest. Some teams still had or had gone back to the button-down style. But only the Phillies had the zippered look ('73-'86), and for some reason, that's the style they chose. Maybe in honor of the previous year's World Champs?

Some '81 ASG merchandise. Can Cover! 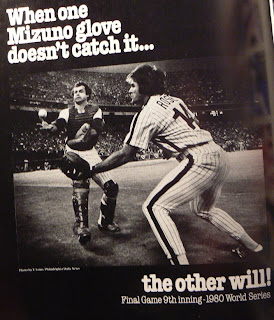 This is interesting. I loved this shot of Bob Boone and Pete Rose, which Mizuno used for their ad. I knew about this famous play from the '80 World Series, but I wanted to read more about it anyway after uploading the shot. I found this article featuring Boone's take on the play. It was fun reading about how that big phony, Rose, really made the play harder than it should have been, according to Boone. But then I get to the end of the article, and look what I find:

The epilogue to the story, Boone said, is that he and Rose both used Mizuno baseball equipment, and the company was going to use a photo of the famous play with an ad campaign that read: "If one Mizuno doesn't get it, another one will."

"But the photographer wanted too much for the picture," Boone said, "and the campaign never got off the ground."

Ha! Maybe it never "got off the ground," but it did exist! And I've got proof. 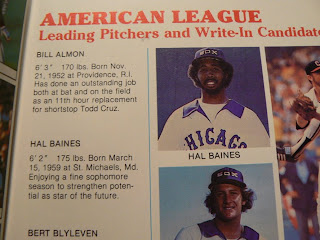 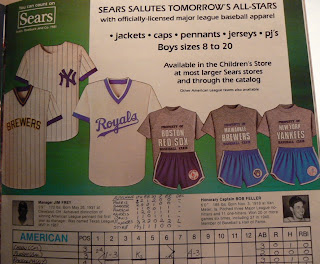 Remember these Sears jerseys and shorts? Also note the game was scored by whoever owned this program. 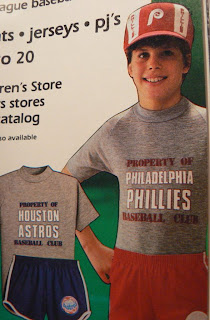 And on the NL side, they used a funny-looking boy model. 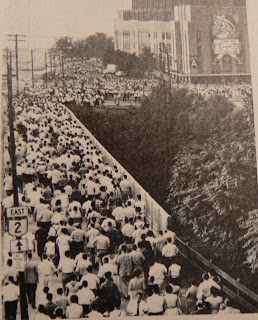 Nice shot of crowds heading for the Mistake by the Lake. Note racist symbol at top right. 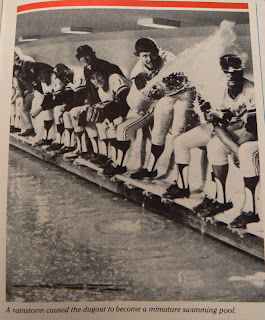 As you know, I love rain shots, but especially extra-awesome ones like this. 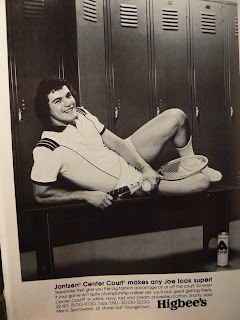 Here's Joe Charboneau in his tennis "separates." If you're under 35, you might not know about the Joe Charboneau craze of 1980. Read a little about it here. (#2, below Fidrych, who you should also read about.)

I cut out the shot of the actual fan so it would be easier to read the text. Poor Cleveland, man....27 years later, they're still waiting. 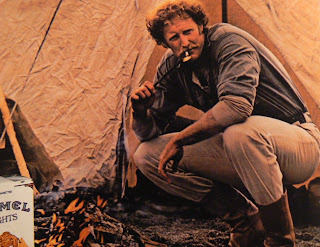 And on the back cover, this guy. Lighting his cigarette with his marshmallow stick. Come on.

Comments:
Rose, a big phoney? Boone would have been a GOAT, had Rose not saved his bacon out there for game 6. Remember, Rose was fielding for a bases-loaded situation, and Boone is making excuses for his almost blowing a big out. Rose got the job done, as usual. Boone needs to get over it...
Respectfully, sounds like you need to do the same.

Oh, I get it now. You're a Red Sox fan who still can't get past the fact that Rose OWNED the BoSox with his MVP Award in the 1975 Reds WS Win over the BoSox. Rose hit .370 with 10-for-27 against the Sox. Now, I understand the issue with Rose.

Pete Rose is not someone I think about all that much. When I think of the '75 Series he's not the first guy that comes to mind. I mean, I was glad he said the line about how he told Fisk (I think) during the series how fun it was, and how he said the thing about how nobody really lost that series.

All I said (and I'm talking about his personality) is that he's a phony. I think there's enough evidence out there that proves my point. This is a guy who's known primarily for hitting, and secondarily for lying. But if you still don't believe it, just listen to him speak in any interview. There are some psychological issues there. In my opinion.

Pete Rose may not be the guy you'd bring to most black tie events, but when it comes to baseball, there is no one who played the game harder. He made players around him better and like it or not, he was a winner. He was the missing piece to the Phillies quest for a World Series title. And, he holds the all time record for "Played in the most games that his team won": 1972 games