Kim needed me to drop something off at a UPS Store. I checked to see where they are, and I figured I go to the Warwick one--not too much farther from us than the downcity Providence one--so I could take some lighthouse/bay shots. I wasn't even thinking about sunset shots, but just when I got to the point, the sky turned pink. Click to enlarge: 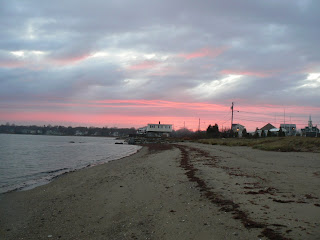 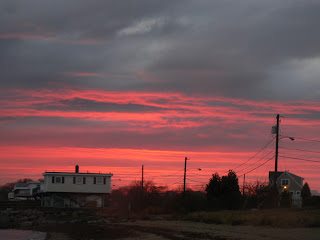 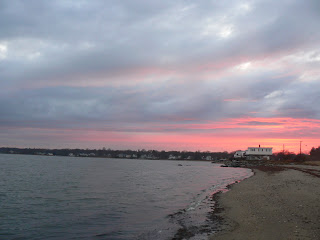 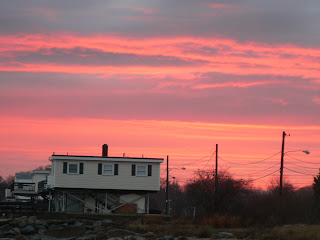 Those are obviously looking west. Below, looking east at the Conimicut Lighthouse in Naragansett Bay. 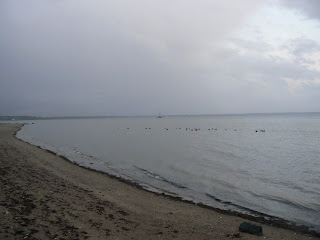 And then looking back up north, I could see the lights of Providence, eight miles north up the river. 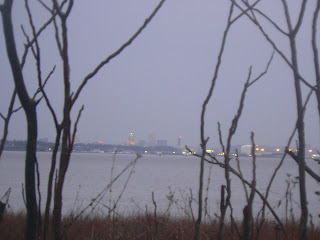 The "A" marker below is where I was standing. Sorry about the raindrops on the lens...

And here's one I messed with the color on (not even Photoshop, just a few tweaks in iPhoto) : 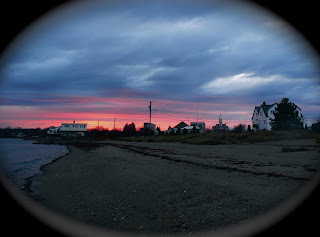 I stood out there in the chilly drizzle, got these shots, started to drive away and the pink was all gone. Nice timing on this one.

Wasn't like that here on Tuesday, that's for sure. It was getting dark at 3:30 because of that rain. It reminded me of northern Maine where the sun sets this time of year at 3:45.

This morning we had black ice here. A couple of towns treated their roads but the one I technically live in did not. I drove into my town later in the morning and there was one spot where there was a little bit of slippery road, and you could tell a car had slid off the road by the disheveled embankment near the roadway.

Then went to Barnes & Noble and saw a few copies of your book, which was VERY cool.

It was probably 4-something when I took those pics. It was so weird, it just seemed like a standard overcast spitty day, but that sun peeked out right at the moment I got to the beach. Totally wasn't expecting that. I almost emailed you asking if you caught the pink, since you're into this stuff, too.

That's cool you saw my book! Currently in every B&N in New England, according to their site. Except Yale Bookstore for some reason...