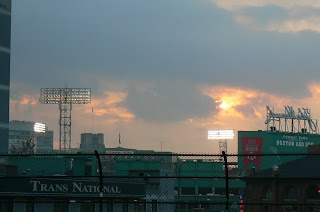 Sun setting over Fenway Park, 5:30 PM, a half hour before gates opened for ALCS Game 5. Click each to enlarge. 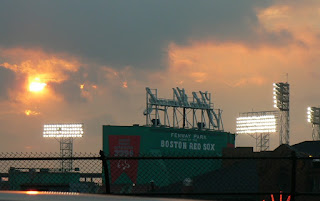 And again. It was a balmy 67 degrees at game time, but being on the first base side, we had the northwest wind at our faces, making it bundle-up weather. I'm sure the people on the third base side were quite comfy. 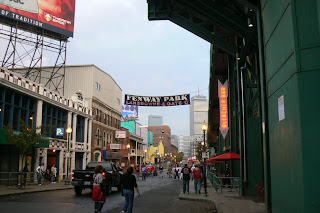 Kim met me at our seats, so I was by myself before the game, walking around the park. I stayed on Lansdowne for a while, under the Monster Seats, hoping a BP homer would bounce off the parking garage and right to me, but no balls came over. The Bleacher Bar is great in that you can peer in from the street (or just go in, it's free and you don't need a ticket to the game to go in--and it'll be open year round) and see if they're doing batting practice, on a rainy day or a day game after night game. If you're into BP and you see nobody out there, you can just come back for first pitch. I almost always go in at gates opening anyway. Oh, down the street, see the yellow on the left? That's the GP or Tyvek wrap on the new House of Blues. Two days earlier it was just the metal rods as I showed you in the last gallery. 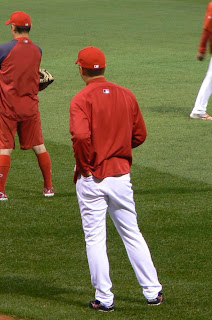 It's almost become tradition for me to get in, and take an initial shot of Okajima. 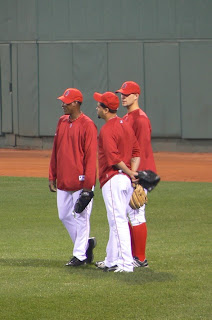 Hansack was goofin' around with Manny and Masterson. 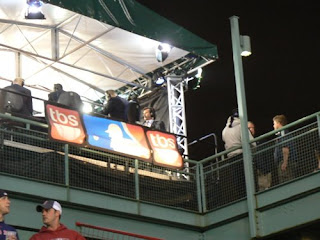 Eck visible up in the TBS booth. 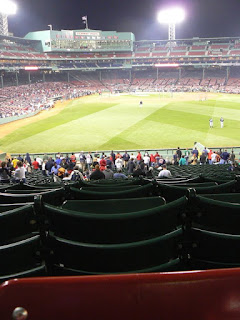 The view from the red seat. So, I was was again going for home run balls in batting practice. I had two close calls. On the first, the ball hit in section 43. I ran down the steps and was about to turn into the aisle--I would've been the first to the ball, but it bounced over and into the gap between bleachers and grandstand. Unfortunately, I didn't realize how wet the ground was, and I slipped making my turn and bashed my knee into a seat. I have a huge black/blue mark now. It's like a Gobstopper is in my knee. So again, I get a ball-chasing injury but no ball, leaving me pretty depressed. Later, a ball bounced near the runway between 41 and 42, and bounced up the bleachers, into the middle of an empty 41. Again, I didn't have much competition, but none of us knew which row the ball was in. We looked and looked, but finally someone gave the word it had been snatched up. I never did see who got it. 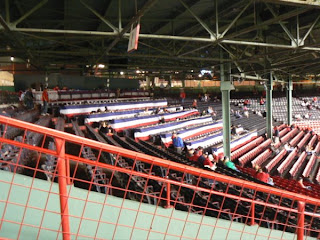 I can never seem to get a clear shot of the extra media section they add in section 3 for these big games. But it is cool how you can see in this shot that a huge wind kicked up. Look at the section 1 sign. It takes a big wind to make those things sway. 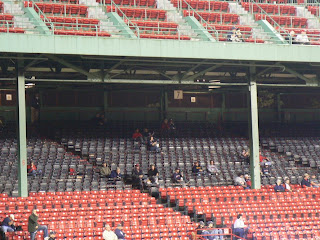 I spotted Kim at the seats and headed up there. 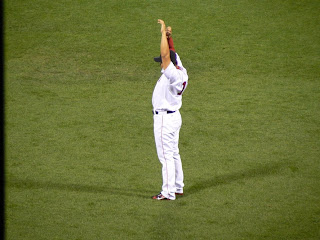 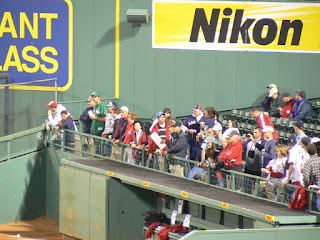 Did you notice they've cut down that fence on top of the bullpens. It used to be in the way of the first few rows of bleacher seats, and trying to take pictures through it was like trying to squeeze a Nikon into an Ant Ass. 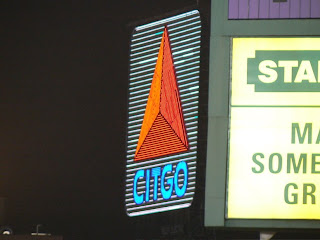 They said the Citgo sign's panel got darkened by the fire the day before, but I saw no evidence of it. 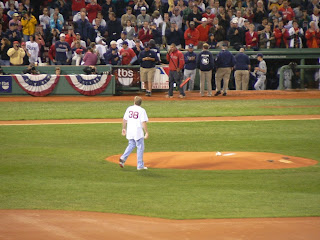 Schilling threw out the first ball. 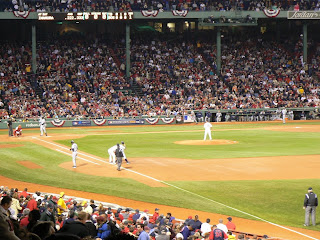 Dice pitching in the first inning. 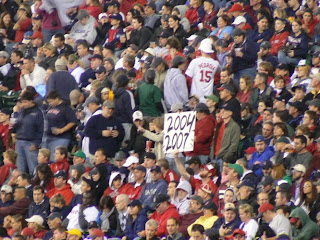 The "I Like Baseball" guy had a new sign. On the front, "2004/2007," and on the back, "This is Boston, not Tampa Bay." It's funny, the guy saw his pic on my blog and we have talked by e-mail a few times. And speaking of notable Fenway fans, commenter Rooster (who leads in the ALCS runs contest) wrote about "Kazoo Guy" on his blog, Rational Sox Fan.

Okay, so we're getting killed again. Dice gave up the dong right away, then later two more. Then Papelbon is summoned in the sixth after Manny walks two to start the inning. Pap gives up a two-run double, and it's 7-0. As runs kept getting tacked on, I kept saying to Kim, "we need to demoralize them." I figured the best way to do this was with a great comeback. At 7-zip, I said, "A regular win was not an option tonight, demoralizing them is the key to going on and winning the series." I heard Tim Kjurjkizian say that "every fan in the park was resigned to the fact that the season was over." Correction: All the fans who left thought that. Why the fuck does he think we stuck around? Don't you love when the media lies just for fun?

So then people start getting crazy. One girl gets kicked out of the bleachers and doesn't go quietly. Another man down by Canvas Alley in the front row who earlier tried to start waves and then took off his shirt got up again. People were more into just cheering for him than actually starting a wave--since he tried to start it every five seconds. He didn't even really check to see if it started going around. Here he is:

I really think this crazy, "Hey, might as well have fun" crowd helped the team. So we make it 7-1, and the top of the order is up. I figure by the time Youk homers, it'll be 7-5, so I tell Kim, "It'll be 7-5 before ya know it." I was only a little off. Papi came up with two one, and after I said, "Papi can hit this fastball pitcher," he totally did, rocking one 20 rows up in right field. That ball was more than halfway to that special media section.

Here's the reaction after the dong makes it 7-4:

And here's a shot of how high the ball went. See the usher in the green windbreaker? He's just arriving at the spot the ball landed: 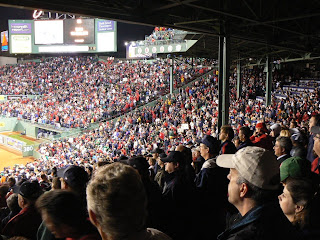 In the eighth, Drew hits a two-run dong. 7-6. Then two get out. But Kotsay, who I always love to see up there, and Coco, who you know wants to kick these guys' butts, are due up. I say to Kim, in another amazing prediction, "we tie it with a double and then a single." And that's how it happened. Kotsay's ball goes off Mr. Nonchalant's glove--another thing I easily foresaw--and Coco fouled off pitch after pitch before knocking in the run. He was thrown out at second, but we were going to the ninth, incredibly tied at 7. Here's the reaction after Drew's dong, and then cut to: the 7 going up on the scoreboard after Coco tied it, while Don't Stop Believin' plays and we all go nuts:

The "believe" signs were out: 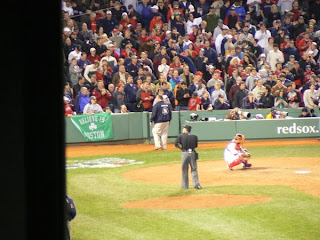 Top nine, Pap has gone two, so Masterson comes in. First guy singles. Then with one out and two on, the slow-footed Pena's up. I say, "good, he's more likely to get doubled up than the speedsters." Kim told me she'd never heard the term "speedster." But anyway, Masterson does it. Tailor-made. DP. Now we are out of our minds, as we go bottom 9 with a chance to win it, and Dustin, Papi, and Youk due up. After two outs, Youk grounds to the ass at third. And here's what happened:


That's me you hear not only noticing the low throw (I am the master of noticing right away if a throw is gonna be offline. And yes, I made plenty of incorrect predictions on this night, but overall I was on fire!), and then saying something about "that fuckin' A-Rod dude."

And after a walk to Bay, Drew hits a rocket toward the right fielder, right in front of us. He goes back....and it's over his head! Win! Here's that video if you missed it (I notice it has like 6,000 hits--checked the "stats" and I see Deadspin linked it, that's gotta be why).

The scoreboard showing the great comeback: 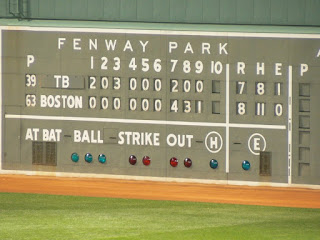 And the other one: 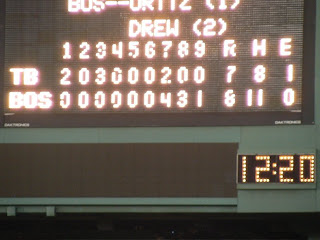 And then we finally danced our way back to our cars. It was incredible. Still gotta win two more. Do it!

Comments:
I think I've probably said this before on this site, but thank you for taking a faraway Sox fan along for the ride. Last night's game was one of the best rides yet, and you gave a feeling of what it was like to be there for those of us not able to be in the house.

I just wish the YouTube technology was better (as I've said before.) These blur-fests are sparklingly clear when I watch them in my QuickTime player.