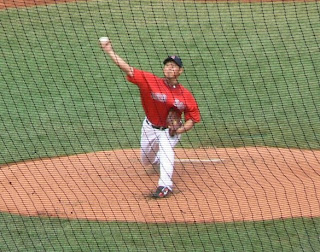 So I watch the start of game one from behind the plate. Here's Dice-K. Did I mention the classic home whites might have been more appropriate for the Pesky ceremony? 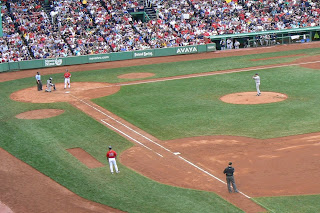 It looked like many of the seats were filled, but then I thought back to those right field roof boxes I'd been in earlier in the day. I took a shot, and there were plenty of empties up there. I've had seats up there before, and if you're way out in right field, it's not the best spot. But those boxes extend pretty far in, almost to (a point above) Canvas Alley. I was inside the foul pole, and I really liked the view (pic above). If you're looking for 50-dollar seats, and you can get something in the (section #) 20s up there, go for it. The 30s and 40s are too far out, especially considering you can get infield grandstand for the same price. 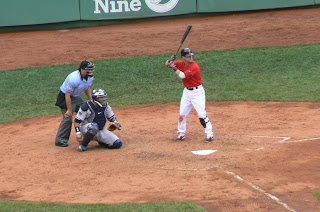 Pedroia from the right field roof boxes. Click any pic to enlarge in all these posts. And always. 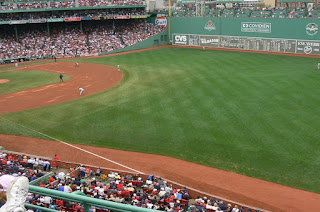 View of the outfield. 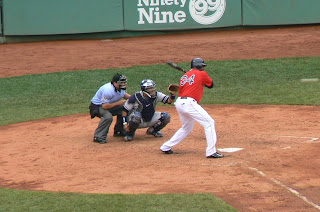 David Ortiz up. This was the game in which the starters actually played. 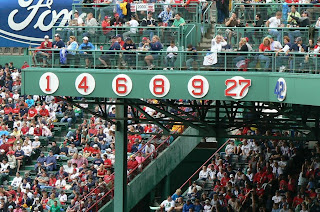 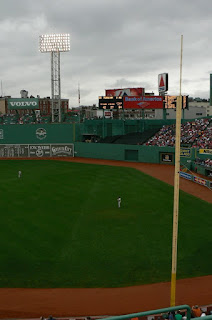 I was in the exact spot where you can't see the screen on the side of the pole, as it's facing directly away from you. 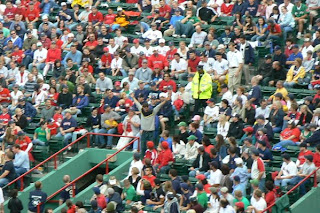 Plenty of Yankee fans in town over the weekend, and as usual, there were some fights and ejections. This guy was quite proud to get to miss the rest of the game. 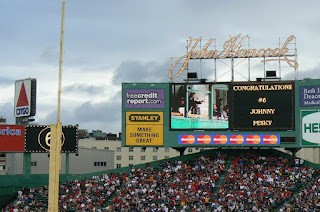 Pesky honored for the hundredth time that day. Well-deserved.

From up there I had a good view of the Monster scoreboard. The Mets were tied much of the time, as were the Brewers. Finally the Brewers took the lead, and the Mets lost theirs. The White Sox were winning, which meant a make-up game on Monday looked necessary. 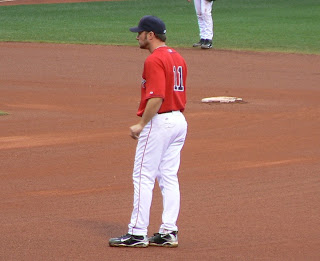 I also had a good view of the box seats below, and when I determined there were enough empties, I went downstairs again, down by first base. Here's Kotsay from my new seat. 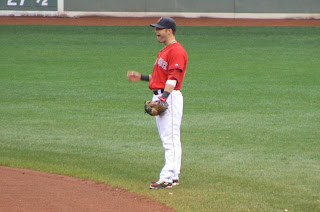 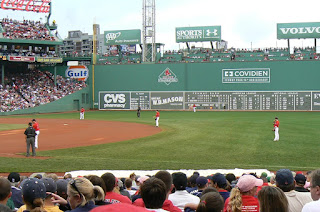 In the Giambi shift. You can see in the background that the Brewers have lost, and the Mets are down two in the ninth. Finally, the guy came out with no new numbers in his hands, went past the Mets score, pulling another inning number out, and then, like some kind of sadistic Vanna White, grabbed the "9" out of the Mets game's inning slot on his way back to the door, making it a final, and ending the Mets' season. That poor team, man. 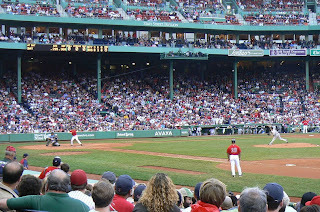 Jason Bay up against Mussina. The game was close, with the Yanks finally getting a three-run lead. I was hoping they'd blow it for Mussina, who was going for his 20th win for the first time in his career. 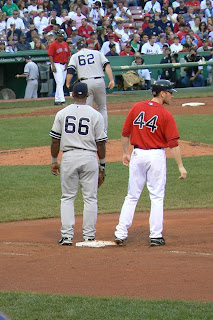 And it looked like they would blow it when Terrible Joba came in and shit the bed. So great to see. Here Bay's 44 is next to a rare #66, which Jobber in the background. 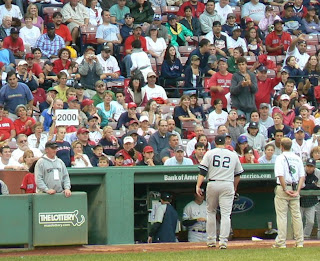 And Joba is taken out quickly after being totally ineffective. You could tell Girardi was going all out o get Moose his 20th. All I wanted was for us to tie it so he couldn't get it. Please note the "2000" sign in the crowd. After 2004, I thought saying "2000" would be a given. For some reason, Fenway crowds never started doing it, though. And actually, I didn't even notice these during the game. When going through my shots, I saw one up by Pesky's number (you can see it in earlier parts of this post), and for some reason I thought maybe it had to do with Fisk, since that's when his number was retired. It made sense, and it was such a small and "offical" looking sign, attached to a bar--I thought maybe it was Fisk's party, and they labeled his table with a "2000." It wasn't until I saw this pic, with people holding up the sign, that I realized it. Finally! Let's rub this in their disgusting faces in every way we can! Eight years is the third-longest drought in their history! 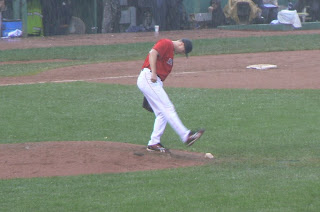 And then the rains came back. Papelbon was clearly messed up by it, and kept having the dugout throw out new resin bags. Good thing this game meant nothing. 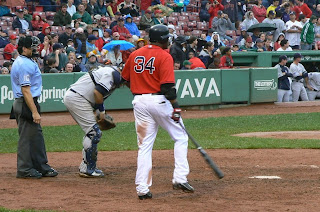 He finally got out of the ninth, but we were down four. Papi up here. 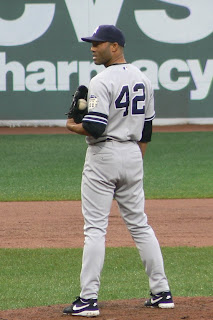 After the rain stopped, I moved even closer. Here's Mo, in the middle of a four out save. "Look, Mo, I know you're about to get surgery and all, but since we're not going to the playoffs, all we've got is beating the World Champs, so we're gonna go ahead and risk your health. Moose thanks you." 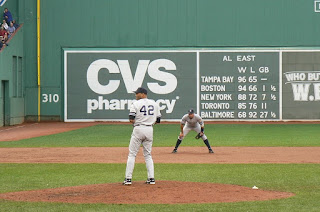 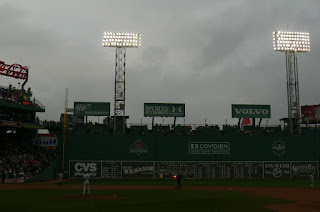 Lights on for this gray day. 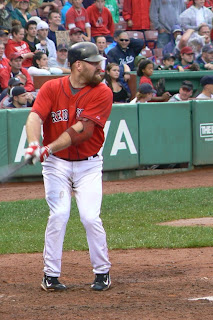 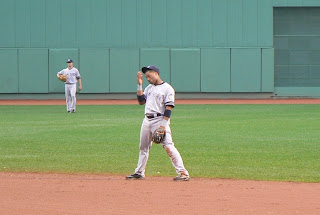 Cano having a ball out there.... 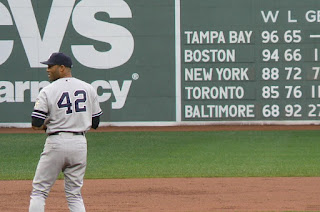 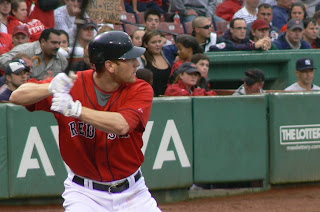 Bay up. We lose. Stupid Moose gets 20. But we go to the playoffs. 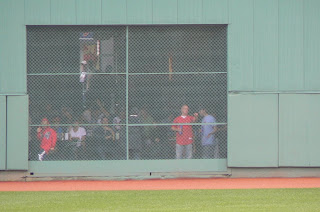 The folks in the Bleacher Cafe. Stay tuned for part 4, game two, where I found even better seats.