I figure the easiest way to this is to divide it into four parts. 1. Pre-game. 2. Pesky Ceremony. 3. Game one. 4. Game the second. So here is the least exciting part, pre-game: 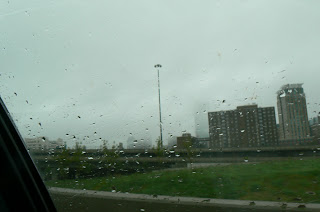 Left Providence at 9:45 AM, after getting home from a wasted rain-out trip a little over 12 hours earlier. It was a rainy trip, and again looked like a wash-out day. But when I got to Boston, the rain had almost stopped, though the city was covered by fog. You can see the bottom half of the Hancock (just to right of pole), and barely the R2-D2 building (just to left of pole), next to the invisible Pru. Note that I took this while driving. 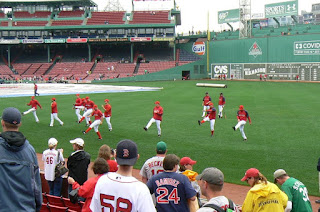 Since the rain had stopped, the Sox relief crew was out there when I arrived, after finding a perfect metered spot, free on Sunday. Two games, zero dollars for parking. Nice. Heard some guy talking how he parked in a great lot--for only 35 bucks. Come on. Never pay for parking on a Sunday. Common sense rule number point-five. I like how Masterson and Aardsma, two high-socked, no-haired, tall pitchers are right nest to each other and in the same pose. 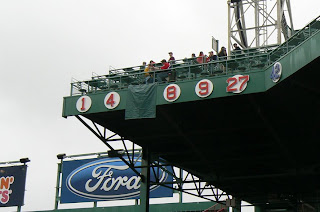 The first thing I did was look up to see how they were gonna do the number retirement thing. Green covering, which would be pulled up. Actually, before that I looked at the retired numbers outside the park (where the upside-down 8 had been), and there was no 6 nor a space for a 6 there. They'll have to remember to fix that. (Also, in the left field concourse, they have these tables, each with a retired number. A #6 table has yet to be added.) 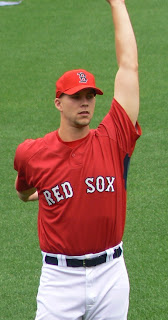 Justin Masterson with effed up arms. 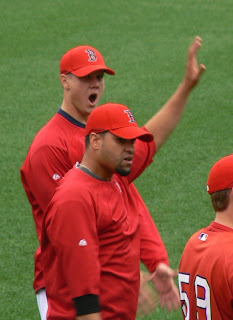 Papelbon never likes to get up early. In foreground, Manny D. and Chris Smith. 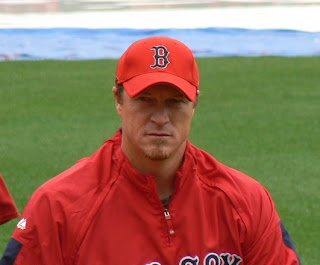 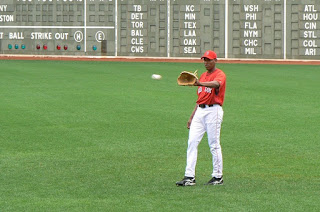 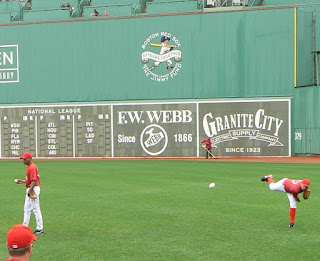 Aardsma throwing toward me. 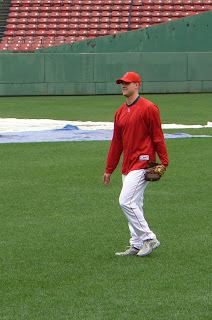 Jonathan Papelbo--you know the rest. It's n. Then I went up to the roof.... 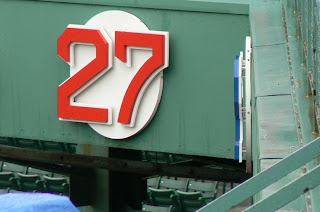 Another thing I wondered: Would they keep all 7 numbers on that one section, moving them all closer together, or would Jackie get the shaft, moving over? It was the latter. That kind of works, though--you've got the Sox on one panel and the league-wide number on the next. Then again, "segregating" the 42 from the others maybe isn't a good idea. I wonder if the "official" order of these numbers is "numerical," or, "Sox, numerical, followed by league-wide numbers." We'll find out when Wakefield's 49 is retired. Anyway, from this angle you see the edge of the 42, and behind it, and Fisk's 27. 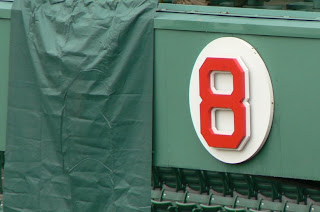 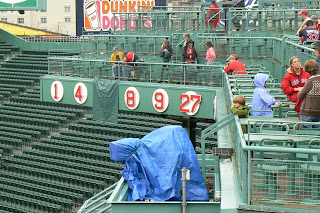 Wide shot of the numbers from up there. 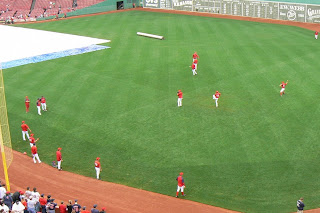 Looking down at the pitchers. Where I took the first group of pics is at the bottom where you can see some fans. 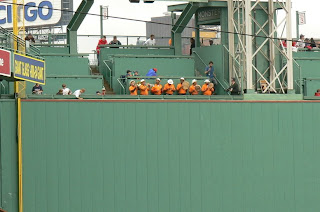 A brass band playing on The Wall. At this point I'm walking around the park, trying to figure out the best place to be for the Pesky number-retirement ceremony. I don't know if he'll go out to his pole and be standing under the numbers, or if it'll be a dugout thing, or a behind-home plate thing. And then I wonder, do I go for good shots of him if he is down by the dugout, or do I go to the third base side so I get him with the number in the background? But then if I'm on the third base side and he goes out to right field, I'm a big asshole. 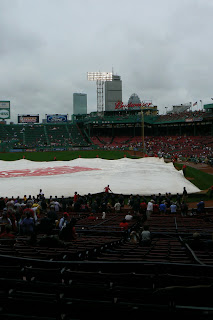 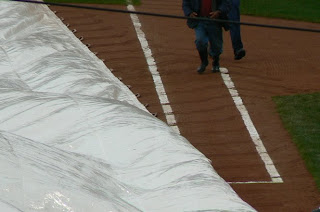 While moving the tarp into place to roll it up after dumping it, the little grabby hooks slid along the dirt to create these lines. 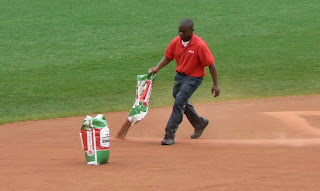 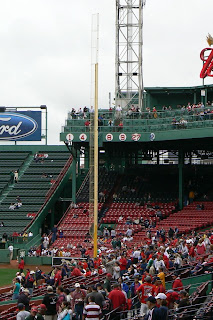 As you saw in the post below, here's a shot of Pesky's Pole going right over the spot where his 6 would be uncovered. I walked and walked trying to get into this exact location where it lined up. Later, right before the ceremony, I passed through the same spot (at the base of the pole between 15 and 16), and noticed two camera people were setting up there. I wonder if they found the spot and purposely went for it, too, to do the blur out of pole right into number shot. I think it may have been random, because I've seen camera people set up there before on special event days. 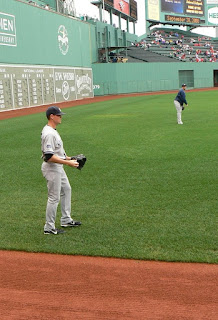 The Sox players were long gone, but finally some Yankees start coming out, on this day with no outdoor BP. Here's Dan Giese. Shortly after this, the lineups were announced, the anthem sung, and the ceremony began. So stay tuned for that and more. I got some good Pesky shots, and some great seats for both games with the sparse crowds.